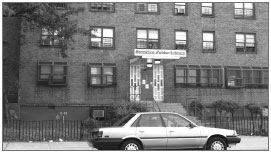 A parole office is set to open in a former public library space in the Van Dyke Houses in Brownsville . 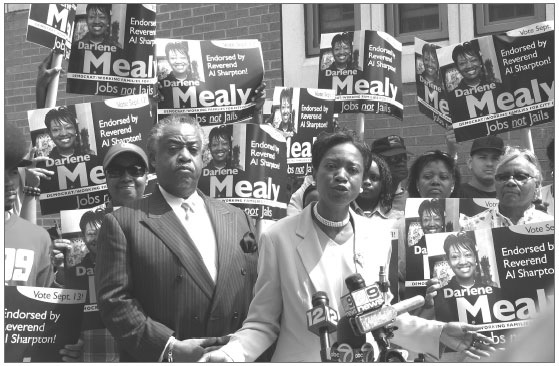 Darlene Mealy, joined by the Rev. Al Sharpton, at a press conference in Brownsville on August 21, protesting the proposed opening of the parole center in Van Dyke Houses. Photo Courtesy of working families party.

Before crack, before Megan’s Law and before 2.1 million people crowded U.S. prisons and jails, the reality of prisoner re-entry still held true: most prisoners come back. Back to the blocks they grew up on, to the kids they left behind, to no job, few prospects, and a weekly appointment with their parole officer. In New York City, nearly two-thirds of those parolees will also go back to prison, returning to police custody within three years for new crimes or parole violations, according to U.S. Justice Department studies. More than 20,000 prisoners from New York State will be released to parole in the coming year, 80% of those to the New York City area, and those headed back to Brooklyn should know: if you’re from somewhere else, Darlene Mealy doesn’t want you in her neighborhood.

“We don’t need Level Three pedophiles and murderers from all districts in our community,” says Mealy.

Her community is District 41, which includes Brownsville, Bed-Stuy and Ocean Hill, and her campaign to keep non-local parolees out of the neighborhood is part of her bid for Brooklyn’s only open City Council seat in the coming fall election. A parole office has been approved to open in Brownsville’s housing projects in January, and Mealy says the neighborhood has seen enough of jails and criminal offenders without requiring the regular presence of those from other districts in District 41.

“It’s not just people from Brownsville,” says the energetic Mealy. “We don’t need that parole office in our community. We need to utilize that open space” for family and community programming, she says. The parole office is slated for a space that used to be a public library in the Van Dyke Houses in Brownsville.

Mealy is running for City Council on the Working Families Party ticket—an endorsement the Village Voice recently called “the stamp of a campaign that addresses the needs of low-income and working people.” Though new to politics, Mealy has a background in community organizing. She serves on the executive board of the Neighborhood Housing Services of New York City, Bed-Stuy, which creates, preserves and promotes affordable housing for low- and moderate-income families. She is the founder and president of the FARR (Fulton St./Atlantic Ave./Ralph Ave./Rochester Ave.) Community Association, which works to forge bonds between community organizations, and she has been a New York City Transit employee for nearly 15 years.

But in Brownsville, politics are all in the family—or at least they have been for nearly three decades. First Thomas Boyland, then his brother William, then William’s son and daughter have represented the region at the City Council and State Assembly levels. Two generations of Boylands have dominated neighborhood politics since the late 1970s, but term limits and Mealy’s bid for the council seat may soon topple the family dynasty.

Daughter Tracy Boyland has represented District 41 on the council for eight years, and this fall she is being forced out due to term limits. Mealy is bidding for Boyland’s spot against the letter’s father William Sr., a former Assemblyman, who is coming out of retirement to try and keep the council position in the family. William Sr. abruptly stepped down from the Assembly in 2002, in an engineered move that handed his seat to his son, William Boyland Jr.

The “Vote Boyland” ticket seems to be causing some confusion among district locals—one too many Boylands in the pot to know who’s running for what—and Mealy may find advantage in that confusion. “A lot of people are ready for change and they’re telling me we need new blood,” she says.

Critics of the Boyland stronghold highlight the community’s plight as evidence of the family’s failings: The median household income in Brownsville is little more than $20,000, and 41% of the population receives income assistance, according to the 2000 U.S. census. One in 30 Brownsville residents is HIV positive, reports the African American Planning Commission, and the rates of infant mortality, lead poisoning and hospitalization due to asthma are high in the area, according to the Department of Health and Mental Hygiene.

“If Ms. Boyland distinguished herself in the Council, it was for nonperformance,” wrote The New York Times in its endorsement of Mealy. “The non-Boylands in the race are plenty, which could splinter the vote to the family’s advantage. The ball of fire here is Darlene Mealy, a transit worker and first-time candidate who has devoted years to organizing distressed neighborhoods and helping transform them into safe, desirable places to live. Ms. Mealy has the makings of a dragon slayer, which this underserved district needs.”

Mealy has the blessing of Reverend Al Sharpton, who endorsed her candidacy this August, as did Assemblyman Nick Perry, who represents Brownsville and East Flatbush and brings with him a considerable base in the West Indian community. Through small donations and the receipt of matching funds from the Campaign Finance Board, Mealy has raised more money than any other candidate for the seat.

“My community put me up for election,” says Mealy. “They’ve known me since I was 19.” One of eight children, born in Detroit and raised in Brooklyn, Mealy went to Manhattan Borough Community College and once started a local softball team called the “Bullets,” which won three straight championships in its league.

In honoring Mealy for her community service in 2003, Congressman Edolphus Towns said her “commitment, leadership, innovation and motivation have brought a positive change to the neighborhood and community she serves diligently.”

Mealy says she would continue that diligent service through the City Council by shifting the community’s focus toward health and education—not jails. “Jobs, not jails. Affordable housing, not jails. Education, not jails,” she says.

Her opposition to the parole office—the arrival of which Mealy says Tracy Boyland approved of—is an issue of allocation of funds that can be better spent elsewhere, such as building new schools or providing subsidies for housing, she says. Mealy plans to start a mentoring program between young and veteran teachers in the district, and believes those are the kind of programs District 41 needs: not a parole office.

And while the merits of the office’s location are debatable—most experts support a more community-based approach to parole and supervision, including the location of offices in less central, more targeted areas such as the Van Dyke Houses—Mealy’s campaign may succeed in leveling the Boyland’s political tenure, bringing a new brand of politics to the neighborhood. Says Mealy: “I’m already feeling it. This is my time.”

Our original short story this month features three characters caught in a love-triangle, engaged in a violent struggle. The story unfurls in one sentence, the form of “Kids” perfectly mirroring the breathless desperation of its characters.

Rebel Against Reality: The Spheres of Henri Plaat

Dutch visual artist Henri Plaat’s 8mm and 16mm films, influenced by his memories of World War II and contemporaneous newsreels, playfully examine the persistence of the past within the present.