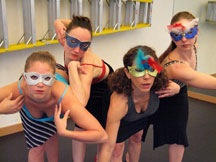 Well, it’s that time of year again: The middle of August, when everybody who can has escaped the city, and those who can’t escape reality at the always unpredictable Fringe Festival. We sent two of our fearless writers to check out a few dance offerings, and report back from the field. –Claudia LaRocco

Holding the audience hostage in a performance space sounds brilliant. Making a dance about having no space to make a dance is a hilarious (and pertinent) idea, and paying homage to Emily Dickinson is always welcome. Not living up to these promises is hugely disappointing.

Named for the army reservist seen physically and sexually humiliating Iraqi prisoners of war in highly publicized photos, Lynndie England ventures to explore the relationship between victim and executioner. Charlotte Schioler, a disruptive “audience” member who calls a friend on her cell phone just as the lights go down, suddenly becomes our captor. Lit by three flashlights she paces in front of us, threatening “This is a mic test.” Bound in a chair, Director David G. Trétiakoff sits, barely visible, with a paper mask hiding his face. He breathes deeply and belches into a microphone. As Schioler begins to cheerlead, calling out, “Give me an ‘A,’ give me a ‘B,” I no longer feel like a hostage, nor do I feel threatened by her as she gyrates uncontrollably and exits, abandoning her mission and the performance. Trétiakoff takes his mask off, enthusiastically welcoming us to the “Lynndie England Show” as he hands out pictures of people impersonating England in bizarre situations, including giving a thumbs-up to hamburgers. “I am no one,” he says as the flashlights pan away from him. What started as a disturbing dance dissolves into flippancy.

In No Space, a short solo following Lynndie England, Schioler rabidly claws and scrapes her body, searching for more room beneath her skin. “I need more space,” she cries as she scales the parameter of the room, trying to exceed the boundaries of her body and the stage. Her very literal execution of the title might have been more successful had Schioler experimented with more ways of expressing this claustrophobic idea of limits.

In Emily DickinsongS, brAdS company director Monica Bucciantini plays the Innocent, frolicking gracelessly in white tutu and corset as though fighting to keep her balance aboard a sinking ship. Emily DickinsongS could be that ship. One by one, topless boys pour bottles of water on her hair (she sighs with glee), in her mouth and down her elbow. But her wide-eyed reverie is soon brutally interrupted. The poems of Emily Dickinson are angrily shouted in English and Italian as the boys begin to beat her with the bottles and spit water in her face.

As though watching a movie, performers sit facing the audience, stuffing their mouths with potato chips and soda—laughing, grabbing each other in fear, and crying. From across the room Bucciantini sees a boy. They frolic together and he swings her around in the air. They begin to kiss passionately, and then he rapes her. Two more boys appear and, well, they rape her too. Devastated, she squirms and moans on the floor, her tights torn and dirty, while Tori Amos accompanies her distress. I am, admittedly, not an avid reader of Emily Dickinson, but I have never felt that her poetry addresses the way “blessing means raping, when man uses man” as Bucciantini states in the program. Emily DickinsongS had little, if anything, to do with Dickinson or her poetry. I found no trace of the longing she expresses in her poems, nor her reflections on inspirational moments, nor the belief that happiness might be attainable in poems such as To Make a Prairie or Hope is the thing with feathers. Dickinson was not an Innocent. She was a woman who lived and thought deeply, and her work was greatly misrepresented in this piece. –Nicole Pope

Nicole Pope is a dancer and writer living in Brooklyn

One particularly grisly tale from Ovid’s Metamorphoses was pulled into the 21st century, with spirit and with serious flaws, by the Refraction Arts Projects’ Philomel Project: a barbarous pleasure. The tale in question involves a husband, Tereus, sent to fetch his sister-in-law, Philomela, by his lonely wife, Procne. But the lecherous Tereus rapes Philomela, confines her to a forest, and cuts out her tongue when she protests. Philomela weaves her story into a tapestry, which she makes sure is delivered to her sister. When an enraged Procne’s vindictive plotting is disrupted by her young son Itys, who bears a striking resemblance to his father, she kills him, cooks him, and serves him to Tereus. The unwitting cannibal gives chase upon discovery, and both sisters and Tereus are transformed into birds as they run The Refraction Arts Project produced an inventive interpretation. An all-female cast rotates seamlessly through the roles with the help of a few costume cues, and the birds literally take to the air. There is a lively synchronized swimming act, a seductive shimmy to Chain of Fools, a vaudeville routine of dirty jokes, and even a moment when Procne recites from a cookbook. It’s hard though for something like this not to feel like a bastardized version of the original. The most noticeable oversight in the staging is that Tereus’ lust is brought up to date and to life, while the infanticide and theme of female violence are hardly addressed. The infanticide is handled through two interrupting litanies. Itys recites a list of inventions and Procne recites a list of wars. Such treatment suggests that technology and war are solely the terrain of men and does little to animate the kind of rage that could provoke such an act. If Ovid’s story is meant as a cautionary tale, this production only handled half of it.

While Philomel Project: a barbarous pleasure probes savage threats to domesticity, Tiffany Hodges’ Rock Out follows people who can hardly make friends, much less form a marriage. Alienated and lonely, two office workers manage a tentative intimacy after accidentally observing each other in reveries of dance. As the liner notes put it: “Aside from giving birth, having an orgasm, and sitting on the toilet we are never so naked as we are when we are rocking out.” The two main characters communicate awkward desire and frustration amusingly, but a bit more naturalism might make the production live up to the liner notes. Subtle secondary performances—the woman on the subway who radiates annoyance at the person who sits down next to her, the drunken hookups at office parties and the half-disapproving, half-envious gaze of coworkers—contextualize the hesitant romance.

Both of the above pieces achieve their success primarily through theatrical means. From a dance perspective, Regina Nejman & Company’s Velocity of Things is much more accomplished. Both spectacular and thoughtful, the dance plumbs the difficulty of aligning feminine seduction with kindness, self-possession, and physical labor. The stage opens on a man and a woman sharing a bucket of sand, literally pouring it back and forth. Jarringly, women in red high heels and black and white 1930s swimsuits diagonally cross the stage like beauty pageant contestants. The fiery Nejman falls into a contorted pose. With red heels planted, shoulders on the floor and her neck seemingly broken, she gazes out at us behind a feather mask. Another dancer takes one look at Nejman and drops into an identical pose. The two continue to dance. Such subtle suggestions—that mimicry is method when it comes to sociable sexiness—are Nejman’s forte.

With an aim higher than Rock Out but less ambitious than Philomel Project, Nejman finds a comfortable level of ambition with which to explore the integration of sexual need and social habit. She approaches the task with humor and an inventive and intelligent vocabulary of movement. –Emily LaRocque

Emily LaRocque works at the Poetry Society of America and freelances as a dance writer.