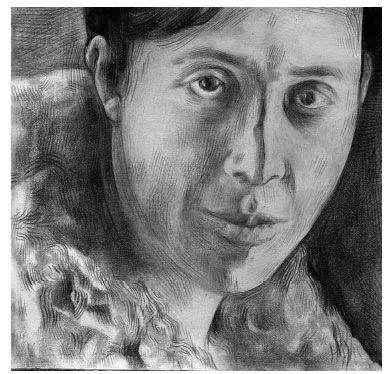 Portrait of Nemirovsky, pencil and paper by Phong Bui, 2005

I headed to the New York Public Library to research the life and work of Irene Nemirovsky expecting to find a plethora of information. The name is most likely foreign to you. In fact, until a friend offered her name and a brief sketch of her life in passing, I was totally unaware of her existence. I climbed the daunting steps knowing only that she was a prolific writer living in Paris during the 1920s and 30s, and had completed 13 works before dying at Auschwitz, during the Holocaust. And yet, these cold and meager facts motivated me to seek something more substantial; I wanted to move beyond mere speculation and obtain a concrete sense of her humanity.

Unfortunately, this investigative trip proved to be a futile effort. Aside from a collection of mundane press releases and one novel, Life of Chekhov, everything was either written in French or out of circulation. My research efforts thus halted. I am neither proficient in French, nor do I have the means to locate out-of-print novels. For instance, David Golder was translated by Sylvia Stuart in English in 1930 but is now inaccessible (at least in my experience) because Knopf/Vintage have bought the American rights—there is only a slight chance that they will be released in the United States. Similarly, A Modern Jezebel was translated in 1937 by Barre Dunbar and published by Henry Holt and Co., but is currently out of print. It is unclear whether they will even retranslate the texts. Since I was afforded only the shell of her work, I was left to surmise like a madwoman.

Therefore, unless you are fluent in French or can obtain rare English editions of her novels, you will have to be content for now, like me, with a very intriguing collection of facts in addition to summaries of her books, many of which appear to share the themes and struggles of her own life. That is, until early 2006, when her novel, Suite Francaise (currently available in French), will be released in English by Chatto and Windus in the United Kingdom and by Random House in the United States. The novel had remained a buried manuscript since her death in 1943. The two parts composing the novel, Storm in June and Dolce, were intended to be included in a five part series based on War and Peace. Storm in June documents the exodus of Jews from Paris as the Germans advanced upon the city, and focuses on the privilege-preserving ethics of the French aristocracy. Dolce moves to a small village inhabited by an aristocratic family, wealthy landowners, shopkeepers, peasants, and German officers. In this setting, Nemirovsky offers a candid and scrutinizing look at the ugly underbelly of a war-torn France. In the meantime, I will provide you with some specifics of her life and the reflections in two of her novels that were reviewed in the 1930s in English.

Irene Nemirovsky was born in Kiev, Ukraine in 1903 to a wealthy Jewish banking family. They were forced to flee Russia in the aftermath of the Bolshevik Revolution, eventually settling in Paris. Nemirovsky’s father re-made his wealth, providing his family with a prosperous lifestyle. Irene frequented affluent social events throughout her young life. After being fully assimilated into the Parisian culture, she went on to study literature at the Sorbonne. By the age of 26, she married a man named Michel Epstein and was on her way to becoming a published author. She soon became a celebrated novelist in the literary community.

Through her early career, her work examined the disparities between rich and poor. When Germany declared war on France in 1939, Nemirovsky found that these harsh and dividing social and economic realities—easily ignored in times of peace by those outside of her progressive circle—were magnified. Nemirovsky, accustomed to a life of entitlement, soon became persecuted herself as she was shunned and deserted by friends and acquaintances in the literary community. Refusing to be an exile, an all-too familiar experience for her, she sent her daughters, Denise and Elizabeth, to live with their nanny’s parents in a small village in central France called Issy-l’Eveque, while she remained in Paris with her husband.

Separated from their daughters, Nemirovsky and Michel continued to work in Paris until laws made it illegal for them to do so; they were threatened by deportation. Therefore, once the German forces invaded France, Irene joined her daughters, followed by Michel one year later.

Prior to removing her daughters from Paris, Nemirovsky baptized her daughters into the Catholic Church. However, for the next three years, she and her family would live in the small village where they were forced to wear the yellow Star of David. During these last years of her life, she took solitary walks in the woods where she wrote Suite Francaise. Before being arrested in 1942 by the French gendarmes, Nemirovsky entrusted her two daughters with a suitcase containing clothes, photographs and her precious manuscript. Her husband was arrested three months later.

Elizabeth and Denise went into hiding, lugging the suitcase, from safe house to safe house until the liberation of France in 1945. At that time, Denise and Elizabeth searched in vain for their parents at the different gathering points for prisoners-of-war and survivors. Only many years later did they discover the circumstances of their parents’ deaths: Irene Nemirovsky died of typhus at Auschwitz five weeks after her arrest; her husband Michel Epstein also died at Auschwitz.

It was not until she had carried the suitcase around for a decade following her parents’ death that Denise began the slow and painful process of sifting through her mother’s belongings. Then, in 1970, she began transcribing the small printed words of what she believed to be her mother’s journals. During this quest to reconnect with her mother, she realized that she had inherited two of her mother’s completed novels. Now, upon publication of these works, at the age of 75, Denise Epstein is hearing the voice of her mother’s experience during some of the darkest days of history sound through the streets of Paris (and eventually the English speaking world) again.

The plotlines running through her novels distinctly emphasize the stratification between rich and poor and allude to the conflicts Irene must have faced in her own life. For instance, at age 26, Nemirovsky completed her first novel, David Golder, in which she presents a man’s painfully reflective view of his life after seeming to fail, both physically and emotionally to satisfy his greedy, shallow and materialistic wife and daughter. A review in 1930 projected that:

“David Golder is a stirring and powerful piece of work. A sordid tragedy which makes us for the thousandth time question the worth of human existence. The impression remains with the reader that it is the work of a woman who has the strength of one of the masters like Balzac or Dostoyevsky, and is capable to an unusual degree of exciting pity and terror.” (‘Some Trust in Chariots’ and other Recent Fiction', New York Times, November 23, 1930.)

In Les Chiens et les Loups (The Dogs and the Wolves), she depicts Russian Jews during the reign of Czar Nicholas II, who in 1917 was dethroned by the Russian proletariat, thus giving rise to the Bolshevik Revolution. She specifically focuses on the journey of a young Russian girl as she migrates from Russia, driven by war to Paris, where the poor and rich exist independently of one another.

“Her talent comes out in best light when she paints the feelings of common humanity. [Les Chiens et les Loups] is the first novel of Mme. Nemirovsky’s which brings in memories of her girlhood in Russia. To this personal touch is due to a vividness in the descriptions and an intensity of emotion, which impart to the story great force of appeal.”

Both novels appear to depict the protagonist’s existential outcry, incorporating both historical and social realities of the time.

This is what is clear: Nemirovsky understood the compelling tensions in her own life and appears to have successfully fictionalized these in her work. She was a Russian Jew from a prosperous family living in Paris at the height of anti-Semitism between World War I and World War II. She was an empowered woman and rising literary figure who expressed sincere alarm about a society gripped by a system of injustice.

In her brief 39 years, she depicted the opposing realities of both the wealthy elite and the peasant, but conceivably the story of her own life was the most intriguing. I eagerly anticipate reading Suite Francaise when the English translation is published in 2006, at which point, through the direct absorption of her writing, we hope to have greater access to her life and work.

Erin Durant is a writer based in Brooklyn.