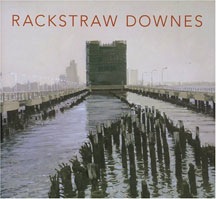 Before we encounter a word of text, this superbly produced monograph begins with a full page image of an unimposing stretch of barren ocher-colored land, traversed by a blue slice of ditch water that moves upward to the right, away from the viewer. Some indistinct details over the horizon, foreground stones and fugitive patches of weed suggest the scale. Turning the page, the image continues from left to right (across the book’s gutter, as it will for four more pages), now given clearer focus and scale by oils rigs, nearby and distant, and three horses in the middle ground grazing. The deep space of the flat desert-like landscape is articulated by receding power lines on poles and distant jack-pumps, and the foreground comes into sharper focus, with darkened, damp soil, patches of water, and sparse vegetation. Turning the page again, we are now fully surrounded by the vast landscape space and grounded within it by the abruptly diminishing size of incidental rocks and the spatial convergence of a lighter, dryer length of ground and a small water-filled ditch, both now moving into the distance in accentuated perspective. A final page turn brings us to the darkening right side of the painting, as though, traveling across space, we have also experienced the day going by. We have been seeing, piecemeal, In the High Island Oil Field, February, After the Passage of a Cold Front, of 1990, a panoramic view of semi-industrial vastness. The shifting light results not from the passage of time but from “turning the head in empirical space” as Downes has titled his entry in the book. We are shown the continuous view to the left, in front of us, and to the right rather than from the static viewpoint of Renaissance-based recession most common to realist painting. The vanishing point of linear perspective has been discarded for what, in effect, is a multiplicity of vanishing points across the picture that describe something close to a 180 degree sweep of the horizon. One could hardly imagine a more sensitive introduction to the concerns of Downes’ art than this unfolding view of a site most of us would drive past at something above the speed limit, an altogether uningratiating, unpicturesque locale in the Texas oilfields.

This is a book that, beyond bringing before the public the work of this uncommonly independent artist, should have an impact on the larger discourse on contemporary art. The three essays that make up the text are diverse in their purpose and thrust, and, taken together, they provide a complex picture of Downes’ art, its intellectual foundations and its place in relation to the work of some of his most discussed and celebrated contemporaries. They also elucidate many key considerations that drive his enormously ambitious project.

Sanford Schwartz fruitfully explores the relationships between Downes’ family and educational background, his literary inclinations and accomplishments, and the paintings themselves. His appreciation of the paintings underscores both the documentary character of their wide ranging subject matter and their formal elegance. He explores the choices of particular subjects and the pictorial structures through which the painter reveals his “poetic, moral, and political” concerns as these have been explicated in Downes’ published essays. Schwartz’ discussion of Downes’ education and his subsequent lectures and writings does much to demonstrate the degree to which the paintings exceed the demands and normal implications of mere verisimilitude, however astonishing the work’s achievement of many levels of likeness may be.

Robert Storr makes a major contribution to the literature on Downes through establishing telling relationships between his oeuvre and that of such seemingly dissimilar artists as Richard Serra or Chuck Close (notwithstanding their having been classmates at Yale, a connection made also by Schwartz), Bernd and Hilla Becher, Jasper Johns, Gerhard Richter, and Robert Smithson. Storr makes a compelling case for such comparisons, and in so doing, dares to elevate Downes’ status well beyond the approbation of admirers partisan to realism. Storr is also keenly aware of the rigorous demands of Downes’ enterprise: “Realism at this pitch is not the average truth of appearances, it is hyperalertness to a maelstrom of data, each unit of which must be reckoned with one at a time and systematically positioned in a coherent spatial relation to the others.”

Finally, Downes’ own essay, “Turning the Head in Empirical Space,” combines a direct, first-hand account of his working methods interspersed with considerations of various spatial paradigms of Renaissance and post-Renaissance, and contemporary modes of painting. Although the historical works he references will be arcane to many readers, the inclusion of small accompanying reproductions make his points entirely clear. Rather than generalize about these, he admirably, and with impressive erudition, uses specific examples of drawings, prints, paintings and photographs of the past and present. In so doing he exemplifies the typically rigorous insistence on particulars that also animates his views of America’s unsung places. The brisk pace of his discussion as he moves from idea to idea, always grounding them in specific instances, will give clues to the temperament behind the hard-won (and in its way, ferocious) body of work he has produced over the past thirty-three years. His own references to contemporary painters are much more extensive than Storr’s and show no concern for the relative renown or their art world status. His generous consideration of the ways space is seen and constructed in the work contemporary artists of various media, genres and aesthetic affinities (disclosure: myself included) shows another aspect of the inclusive mentality that characterizes his thinking.

In Downes’ own words, “What interests me is the contradiction between the continuous enveloping sphere of real space and the delimiting flat surface. A painting on the latter is necessarily a metaphor of the former, involving illogicality and paradox. It is in that metaphorical field that the painter’s imaginations operates.” As Schwartz emphasizes, the artist is lucid in his philosophy and purposes.

Robert Berlind is a New York-based painter who also writes on art for various publications.

Three recent books on scale throw a sharp light on attempts at human-based measurements. Each book induces a humbling sense of the limitations of human efforts to understand themselves in relation to their environment, an incipient awareness that also suggests the possibility of imagining alternatives.

Standing next to any two or three panels, it can be difficult to detect the subtle shifts in shade that the viewer knows are happening along 106 panels between black and white. Yet when we glance down a row of panels, the gradient appears seamless, as the work becomes a perspectival vector through the space. The experience is enveloping, meditative, curious—evoking a slow awareness rarely encountered in the twenty-first century.

An anthology of six hybrid works that approaches translation as an act that occurs not only between languages but also between media and disciplines. Through this dual lens, fourteen contributors on four continents examine timely and thorny questions about the limitations of witness and testimony.