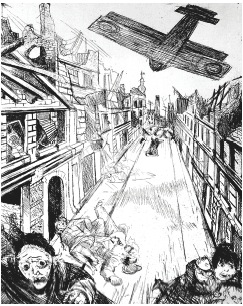 You might expect that Der Krieg (War), a suite of fifty intaglios by Otto Dix, and Die Hölle (Hell), a set of ten transfer lithographs by Max Beckmann, would have been consigned to irrelevance by now. Predating the Holocaust, Hiroshima and Nagasaki, napalm, death squads, bunker busters, and depleted uranium–among countless intervening horrors -what could their tremulous depictions of World War I and its aftermath tell us that hasn’t been eclipsed by the twentieth century’s relentlessly expanding scale of violence?

That, however, is the wrong question. Dix and Beckmann were participants in the war: Dix as a gunner on the western front; Beckmann as a medical orderly. Both artists entered the conflict convinced of its nobility and seeking inspiration from its cathartic power. But the unforeseen, catastrophic destruction unleashed by mechanized weaponry made short work of their illusions. The transformation of their first-hand experiences into art was an act of exorcism in which the pathos, cruelty, and degradation they witnessed were relived across the surface of the print. Every stroke was freighted with rage and mourning over the abject human stupidity manifested by war, endowing each print with its own irreducible truth and rueful timelessness.Hell, published in 1919, is the more stylistically consistent of the two, portraying contemporaneous events like the murder of Rosa Luxemburg as a jumble of flattened, angular grotesqueries in a compressed cubist space. Invoking a theater of folly, Beckmann casts himself as a carnival barker on the cover sheet, luring gawkers with a money-back guarantee. By placing himself at the center of the action (subsequent guises include a noble everyman assisting a maimed and blind veteran; a petit bourgeois at odds with his horrid child and imperious mother-in-law; and a bored intellectual surrounded by supercilious gasbags), Beckmann discloses a deep personal stake in the chaotic and unnerving events unfolding after the war. Paradoxically, he also emphasizes the images’ artifice, anticipating by a decade Brecht’s aesthetics of alienation. And like Brecht, Beckmann laces scenes of unspeakable brutality with inappropriate dollops of caustic humor. Misshapen characters that could have stepped out of the funny papers commit egregious acts of murder and torture. Ghastly images alternate with tableaus of fatuous nationalism or cultural ennui, in which everyone is a vapid fool. Forced to live in a society shattered by a monumentally absurd cataclysm, Beckmann’s sardonic self-portraiture seems to be saying “I’m one of you, and I hate you for it.”

In contrast, Dix’s etchings, even at their most scathing, evoke pity and terror stripped of the idealism required for Aristotelian tragedy. Corpses are corpses, with no point other than that they are dead, and soldiers fight and kill until they attain the status of corpses themselves. The suite was published six years after the war in 1924, yet its images throb with a visceral intensity that defies a single stylistic approach. The demands of the subject matter and the artist’s endless experimentation with aquatint individuate each picture from the next.

A scene of soldiers dancing with whores could have been lifted from Goya’s Caprichos; a close-up of a horrendously disfigured face is rendered with Léger-like precision; a stiffened horse cadaver prefigures the Guernica; a tangle of bodies, severed limbs, and barbed wire displays the same graphic overall-ness employed by Jackson Pollock during the next World War. The sheer multiplicity of images feels like an unstoppable outpouring so frenzied and emotional that the artist could barely structure or control it. Ironically, it is Dix’s precise and delicate manipulation of the medium, and the subtle textures it can yield, that lends the prints their fearsome power. A skull, ridden with squirming worms, is fresh enough to retain its hair and mustache, which are traced in fine lines. Deeply etched aquatint creates gaping holes in the scalp, eye, cheek and jaw of a dying soldier. A squad of machine gunners descends a hill, laden with equipment and munitions, through what at first glance appears to be mud and rubble rendered in light, gauzy grays. But the soldiers are tramping through a mountain of corpses, sinking thigh-deep in the soft, decaying tissue. The killing continues no matter what.

A complete set of War is a rarity. In the run-up to their own preemptive strikes, the Nazis recognized the threat that Dix’s testament of death and putrescence posed for their propaganda efforts—just as it’s now imperative to ignore casualty figures, ban photographs of transport planes offloading coffins, and vilify a grieving mother who dares to ask why. The Nazis destroyed every copy of War they could get their hands on. Their antipathy wasn’t for ugliness in art; it was for the ugliness in truth.

My first encounter with Robert Motherwell’s ink paintings, collectively titled Lyric Suite, occurred in 1965. Not only was this the same year the works in this series were painted, but it was also the year of a major retrospective at the Museum of Modern Art featuring Motherwell’s large-scale works on canvas—such as those from the “Elegy to the Spanish Republic” series—curated by the distinguished poet Frank O’Hara. This would eventually combine with a separate exhibition of the artist’s works on paper, including those from Lyric Suite. It was within this context that the works currently on view at Kasmin Gallery emerged into notoriety.