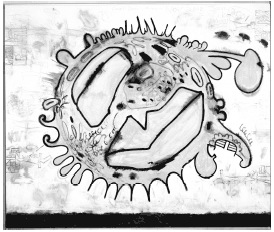 By the mid-1980s it had became apparent that the tradition of Modernist abstraction, a closed, self-referential system exemplified by Donald Judd and carried on through the sixties and seventies, had been infiltrated and subverted by artists—mainly painters. Wielding various sets of quotidian, impure references, they broadened the scope of aesthetic concerns beyond the formal, and, in the process, audiences for contemporary art. Vernacular Abstraction was the title of a 1985 show at the Wacoal Art Center in Tokyo, for which Roberta Smith wrote the typically trenchant essay, though she hesitates to take credit for coining the phrase. Carroll Dunham and Terry Winters were among the thirteen artists included in the show, along with Judy Pfaff, Nancy Graves, Ross Bleckner, and others.

A generation later, vernacular abstraction is the order of the day, with formalists scarce among younger painters. If the term itself has faded from critical dialogue, it is because it has become a set of assumptions, the common currency of abstract painting, no longer requiring identification any more than we would now refer to our “personal computer,” as if to distinguish it from the mainframe we normally use. In part, this is a response to pressures of an expanding market, wherein collectors with deep pockets but little taste for art history, impatient with the linguistic indifference of high abstraction, are provided some anecdotal avenues of approach to the work.

But more importantly, vernacular abstraction is a way for artists to revivify their means of pictorial invention. Ostensibly “abstract” painters routinely impute to their visual vocabularies a second skin, alluding to the world of some other visual realm, and thus blur the distinction between abstract and representational modes. The vernaculars currently under examination on the third floor of the Whitney Museum are those specific to our contemporary glut of data and information. Elisabeth Sussman, curator of Remote Viewing (Invented Worlds in Recent Painting and Drawing), enlists Dunham and Winters as elder statesmen, and extends the thesis to include their juniors Julie Mehretu, Alexander Ross, Matthew Ritchie, Steve DiBenedetto, Ati Maier, and Franz Ackermann. (The title, in the parlance of psychics, is an image-intensive form of clairvoyance.) Many of the artists are concerned with simultaneity, legibility, and metamorphosis, often employing an open compositional structure.

Winters contributes three very new paintings and numerous works on paper. Four drawings in fat graphite pencil have the detached, languid facture of traced projections. This benefits them, as the shapes, scrambled, spiraling patterns drawn from information technology, are satisfyingly intricate, the layering of stroked black graphite rich and velvety. It’s sufficient for a drawing, but in “Display Linkage,” the painting most closely akin to them, the nonchalant application and near-monochrome red looks clumsy and bored.

The effortlessly beautiful surfaces of his earlier work are gone, too, from “Blue Sequences,” in which clunkily repeated shapes, in tints of a single blue, are underlain by nesting ribs of dull, matte gray. In feeling his way forward, Winters enlists his erstwhile biomorphic vocabulary. “Coding” is the best, arranging in three strata stenciled, segmented orbs in vibrant hues. In an adjacent vitrine, on one of a set of small, related drawings featuring variations on this distinctive shape is scrawled “each one is a probe head,” but these balls of closely-packed leaf shapes resemble gigantic, multicolored Brussel sprouts. If Winters is going through a bumpy stretch, he is to be admired for challenging himself with unfamiliar and difficult problems.

The legal battle surrounding the distribution of the work of Julie Mehretu can scarcely distract from the paradoxically visceral power of the best of her highly schematic paintings. The enormous “Seven Acts of Mercy” (2004) is typical of her work in its recombination of graphic elements drawn from the historical rendering of architecture and of weather. In inks and acrylics on silky polymer grounds, an intermediate layer of translucent paint, which partially obscures the underlying configuration and imparts atmospheric perspective, distinguishes the painting. Only a naggingly repetitive, curling ribbon shape encumbers this otherwise sweeping meditation on the public-scale built environment.

An untitled wall drawing in ink and graphite, referring to clouds, reminds the viewer of the difficulty of evoking matter in a gaseous state using only solid and liquid materials. The artist intends to embody the clash of rigid and amorphous pictorial signifiers in this work, but, tethered to the museum’s physical structure, it heightens rather than obviates the viewer’s awareness of the support. But in “Stadia III” (2005), a dissolving latticework intimating colonnades, bleacher seats, and overhead scoreboards shooting klieg lights; logos and symbols from flags flutter like ticker tape in the vertiginous, funneling space. You can almost hear the crowd go wild.

Tossed by swelling ocean waves equipped with enormous cartoon eyes, a human skeleton is entangled in pale blue-gray and amber tendrils in Matthew Ritchie’s “The Eighth Sea” (2002). Striped balls, also resembling eyes, hover in the vicinity, connected by black marker lines to one another and to the skeleton, while a lumpy, popcorn-like scrim further obscures everything. It’s a lovely painting, establishing motifs that are sustained in “The Measures” (2005).

This expansive work is confined by a central enclosure. A continuous wall drawing in drifting, silhouetted black tracery, resembling seaweed or arcane notations, is interrupted by four canvases, one per wall, which pick it up and layer it further with oceanic forms in heavier, colder grays and ochres. Crowding the space is “The Universal Cell” (2004), which reiterates the wall drawing in intersecting, inch-think slabs of perforated black aluminum. The center of this structure, built for one, affords the only vantage point from which an unobstructed, simultaneous view of all four paintings of “The Measures” can be had.

Paintings based on photographs of his abstract sculptures, Alexander Ross’s five canvases (all untitled) fall into two compositional types. Gnarled, predominantly green, vaguely biomorphic masses are rendered in banded gradations against a blue ground signifying sky, which has been meticulously adjusted from brushy to pixilated. Surreal, they are more attention-grabbing but ultimately less mysterious than the two all-over paintings that might be close-ups of the surfaces of these objects. In a vertical work from 2004, a sticky-looking, undulating surface like the interior of a mossy grotto, rises from a ruddy tint at the bottom to a chilly blue-green at the top. It is complicated by a carefully integrated double-exposure conceit. Scale is a big issue for Ross, as, absent of context and devoid of telling details, these objects might be microscopic or planetary in size. The work brings to mind the fragmented yet undulating forms, and the highly rendered yet alien spaces, of Al Held’s late paintings.

Ati Maier shows at Pierogi in Williamsburg, and consistent with that gallery’s aesthetic, makes dense, intricate, airless drawings. In colored inks and wood stain, they are often horizontal in format and laden with imagery appropriated from scientific and science fiction illustration. “Le Vent Nous Portera” (2003) features astrophysical and meteorological phenomena; “The Other” (2003), scroll-like at seven feet long, is the largest among this artist’s works, indulging a penchant for vignettes that ground her apocalyptic warfare imagery—explosions, colliding planets, spacecraft with swooping, rainbow-hued slipstream—in familiar earthscapes, sunsets, and patchwork agricultural fields. Strange horse-and-rider hybrids and castles in the sky give the work a kind of storybook quality. The tiny, clean patches of hot color get slightly fuzzy where they bleed at the edges. For all the layering of imagery, the artist’s paint-by-numbers approach yields a flat, cramped space.

While all the artists in the show (with the exception of Ross) think in terms of line, Steve DiBenedetto literally animates it, transforming it into the tentacles of a recurring octopus motif that often appears in his over-packed canvases. Despite the frequent use of figure/ground reversal, where background color is laid in around a thinly-scraped positive shape, his larger paintings are spatially clogged and materially inert, with little of the sense of veiled, coiled nastiness, the interplay of surface and symbol, that galvanizes the smaller canvases. The crusty, damaged-looking “Dose” (1999), at eleven by fourteen inches, seems more genuinely idiosyncratic than the four-by-six-foot “Codex (Ruins in Reverse)” (2004-05), in which the slumped octopus’s tentacles become the ribbon interlace of a medieval manuscript. The smaller paintings survive the absence of compositional hierarchy, but the larger ones do not; “Codex” collapses under a hot blue ground.

If DiBenedetto’s canvases are uncomfortably dense, Franz Ackermann’s are annoyingly flimsy. Travel is the metaphor here, as the artist refers to many of his small, diaristic watercolor and mixed-media drawings as “mental maps.” Individually they have a certain dashed-off charm, but in a group they are repetitive, relying on simplistic organizational means: a central iconic motif, often a house or barn, elaborately framed by cable-like bands and twisting fronds, apparently meant to suggest pathways. Ackermann’s medium-large oil paintings resemble blow-ups of similar exercises; two canvases from 1996 appear to be line drawings filled in with a paltry film of chalky color, offering no suggestion of development or exploration of the surface. “Last warning last week” (2004) relies on the flashy chromatic jolt of hot red-orange against shadowy, neutralized blues, greens and purples. Ackermann also contributes a gratuitous wall drawing, “Faceland/White crossing I” (2001), a network of meandering white-on-black bands centered on a trite portrait bust comprising an accumulation of graphical symbols and architectural shorthand.

Carroll Dunham’s work of the last decade, with its idiotic palette and iconography out of Mad Magazine, troubles me, but in this context, it is a petulant, bracing blast. The most casually produced body of work here, it includes a vitrine of two-dozen drawings that are unpretentious indeed. The sleeper of the show is “Untitled” (2003), a set of thirteen 7-by-10-inch ink and graphite drawings. On pretty pink paper embedded with tiny flowers, Dunham slaps fat black bars and smoky, bulbous washes, evoking genitalia and furniture.

Finally, the viewer emerges stimulated but not overwhelmed by the enormous amount of visual information on display; and it is understandable that complexity would be a natural characteristic of work that deals with multiple systems and structures. But one wonders if there might be some invented world that is not so fraught, that is evoked by means other than a visual barrage. Every fully formed painter takes us into their particular world, and makes us want to inhabit it for a little while. Mary Heilman, Byron Kim, Joe Fyfe, even musty old Diebenkorn do this. And somewhere in each of those worlds resides a ruthless editor.

STEPHEN MAINE is an artist and critic based in Brooklyn, New York.

So far and yet so near, the antithetical aesthetics of John Chamberlain and Donald Judd are provocatively at play in this compelling show of sculptures, wall pieces, and “paintings” from the 1960s and ’70s. The artists could be considered the alpha and omega of 20th century American sculpture.