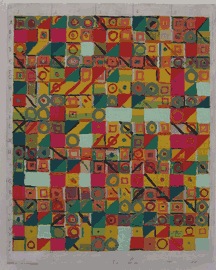 "Ever since that September, time has gotten away from me. Doubts plague me&#x2026;” Thus begins a line of text that, through the intricate imaginings and calculations of Leslie Roberts, is translated or encoded into a grid-based painting called “Bad Attitude” (2004). The painting is small with a pale yellow ground. The left quarter of the canvas is filled with columns of letters, the graphed text. A tall rectangle of solid color blocks of acrylic gouache fills the central half, while the narrow grid on the right is made up of squares filled with diagonal and horizontal lines, circles and crosshatchings of various colors. Without the key (the lines of text, numbered and color coded), the central grid pictures are satisfying as pure meditative non-objective paintings, perhaps a type of color exercise or digital abstraction. Once the viewer realizes that these pieces can also be deciphered as linguistic codes, a swarm of questions engulfs the previous quietude.

“Content is ineffable” was a slogan of the formalist abstractionists, but what if a supposed abstract work did have precise meaning, did mask a realm of covert content that without the key remained “ineffable?” Would that work still be “abstract?” Roberts, with this group of works delves into a deconstructionist mode of re-interpreting text but translates it into a visual syntax that further stretches the notion of “text.” As we transition from an analogue world to a digital one, the potential for a new gloss on visual abstraction becomes an imperative. The presence of the grid, an aestheticized device that came to prominence with minimalism, carries a natural capacity to express numerical, chronological, or quantitative information, as well as to flatten visual space. This kind of calculus could rapidly turn into dry math and it’s a testament to Roberts’s mischievous sense of the whimsical that she’s able to keep things light.

Having watched this artist’s work over that past several years, I’ve written about a previous body of work in which she fabricated puzzles (another way to confound the viewer) using fragments from various historical art works juxtaposed with puzzle pieces of her own photos and paintings, a type of postmodern statement on the fracture of the image within history. This new body of work began about eight years ago with tiny drawings made while Roberts commuted on the subway. The development from the simple pastel colored patterns of the small works gives way to a more complex series on larger graph paper which includes notes, keys, color notations, and texts forming an informational framework around the grid picture. As the works increase in size they also increase in complexity. The codes become denser; color blocks are overlaid with lines, triangles, and circles till they begin to weave themselves into a nearly homogenous field of marks. Because the works are based on language, there seems to be an even greater randomness of design when compared to the grid paintings of Alfred Jensen or the geometrically symmetrical designs used by some of the pattern-decorative painters.

Still one returns to the idea of the visual nature of language. The simple phrases, lists, and fragments of e-mails that Roberts chooses to make drawings or paintings from have the subtle starkness of an Emily Dickinson verse or a line from e. e. cummings. The transcription of these mundane features of everyday life, through the use of color, codes, and numbers, somehow elevates them by means of a mysterious process to the state of relevant contemporary abstract paintings. Perhaps for Roberts the use of puzzles, codes, and ciphers is a subversive means of embodying within the context of abstraction those parts of life that had been excluded as unimportant—the messy, sensual, boring, or frustrating. Things which are unimportant, at least until they’re gone. —James Kalm

“My paintings used to be dense and layered, and lately I’m separating out the parts.” This was Keltie Ferris’s remark in a September 2015 interview with Jason Stopa about her exhibition that year with Mitchell-Innes & Nash.

Janine Antoni: I am fertile ground

I am fertile ground is a piece imbued with the themes of Antoni’s work—the body as an artistic tool, both for making and meaning-making, which corresponds to the art objects that will inevitably outlast it. Her work as a product hinges upon her physical form in the time she makes it, a period sometimes as specific and short as the instant of a photograph.