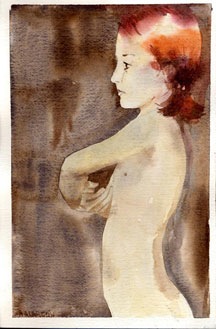 Primarily featuring works on paper and two animation projects by thirty-one artists who live and work in Mexico City and Monterrey, Killing Me Softly is one of this summer’s best surveys.

While diverse in pictorial vocabulary and expression, the works meld into a cohesive reflection of promising talent, all sharing a unique forcefulness and authenticity that often seems to be largely absent in Chelsea shows in which the ever-exhilarating art market dictates the demands. With the astronomical rents pouring down on local galleries, who is to blame that everything is targeted toward the quick buck and that artists are primarily chosen for their commercial value and easily marketable personas? It is more than refreshing to stumble upon a show on 24th Street that brings together works by mainly unknown artists (with the exception of Germán Venegas, who in the 1980s was a member of Neo-Mexicanism), whose works are all of high quality and are surprisingly all priced below $5000, although granted, the exhibition falls into the galleries’ seasonal hiatus.

Curated by Acopilco Workshop, Killing Me Softly is rich in variety. From a miniature landscape, realistically rendered by the duo Anabel Quirarte and Jorge Ornelas (“Snapshot 13”) to Rubén Rosas violently loose and almost childlike portraits in pencil (“Fernando”), the exhibition unfolds by embracing the eclectic with a strong tendency towards the figurative. Reminiscent of 1950s children’s book illustrations, Alessa Esteban’s humorous depictions of girls and pigs are delicate and playful, yet contain a touch of the obscene. The young girls cannot shake a certain Lolita flair, which is supported by the overt suggestiveness of their poses when clinging onto the pigs’ backs with widely spread legs. Different in mood, yet of similar subject matter, Alejandra Alarcó’s stunning watercolors portray young girls caught in the transitory stage between childhood and teenage years. Translucent purples, deep oranges, and flesh tones capture intimate glimpses of nude body parts that seem to burst with hormonal anticipation. In opposition to the physical beauty of each subject, a faint sense of nostalgic sullenness is woven into the texture of each scene, silently accompanying the approaching loss of childhood innocence.

Another dominant source of inspiration is religious iconography, as in Venegas’s “Christ,” a striking ink drawing featuring a proud lion towering over the crouching figure of Christ, or Miguel Ángel Estévez Nieves’s naïve description of a scene in which God is creating man and man is creating God. Outlined in simple pencil marks, Estévez Nieves’s presentation of Creation as an abstract concept traditionally inherent in the imagination and longings of human kind is equally witty, radical, and pungent.

As a final image, Mariano Villalobos’s large paper collage of multiple outline drawings of buildings, paths and insignia, culminates the exhibition with the idea that “Things are Closer Than They Seem,” like terrorism in big cities. The piece also suggests that in the modern age the world seems to become more unified on a superficial level based on co-dependence. Nonetheless, Villalobos’s work remains beyond limiting specifics. Whatever the original meaning, image and title favorably support the idea that art can function as a contemporary Esperanto.