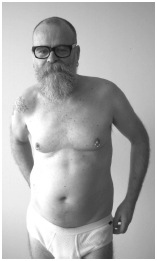 From Christopher Clary, THE MAN (AA) (2005). Courtesy of Exit Art and the artist.

This year marks the thirty-sixth anniversary of the Stonewall rebellion, and no one can argue that the world has not changed for the better for the gay, lesbian, bisexual and transgender (LGBT) community. Once characterized as the love that dare not speak its name, today gay issues are discussed during Presidential debates and regularly featured on network newscasts.

Perhaps it was only a matter of time before we started considering the institutionalization of great homosexuals, hence Exit Art’s show dedicated to exploring those individuals that inspire queers today. Entitled Homomuseum: Heroes and Moments, the exhibit is neither campy, nor overtly political—as would be expected in an older queer show. The clever title evokes the childhood taunt used by kids for those that don’t fit in, the Latin word for human being and a shortened version of the medical term which until a few decades ago was a condition many worked to overcome. In fact, homo is many things to many people and this show gets lost in that multiplicity.

An exhibit, video program, performance series and archive project, Homomuseum consists of twenty-seven artists that have chosen a homo-icon to honor with their art. The result is a hardly curated collection of objects that run the gamut from fabulous—Mary Ellen Strom’s “Nude No. 5” (2005) dedicated to Gustave Courbet’s “The Sleepers” (1866)—to dull—Leor Grady’s “Arm” (2005), which successfully offends both Michelangelo and Felix Gonzalez-Torres.

Some of the heroes, like Jack Smith, the grandfather of camp, deserved something much more spectacular than what they were given—ak burns’s “fountain of salmacis (a heart for Jack)” (2005). Others, like Quentin Crisp, were given their due. Phillip Ward’s “Quentin Crisp: Waif Retired” (1960s–1999) is a precious collection of Quentin-iana that allows the fey one to tell his own story in a part reliquary, part natural history museum format stuffed with personal artifacts.

Mary Ellen Strom’s “Nude No. 5, Eleanor Dubinsky and Melanie Maar” (2005) is without a doubt the prize of the show. While I would argue it deserved far greater artistic company, even in its awkward location it is subtle and elegant. From a distance the video projection appears to be a slightly altered version of Courbet’s great painting. As you approach the work, you become conscious that the image moves slowly. Hands caress arms, bodies turn and the picture transforms into something more sensual than the static icon—the effect is powerful. It is unfortunate that what the artwork achieves the artist’s statement destroys. A pastiche of art history and memory, Strom’s text collapses her superlative artwork into something akin to therapy. This problem is not Strom’s alone, and I suspect the curators are partly to blame for their inclusion of awkward “Artist Statements.”

Another standout is Aaron Krach’s “DANCEFLOOR” (2005) picks a ubiquitous hero (the dance floor) and gracefully establishes a nexus between the arch-minimalist, Carl Andre, with a disco era icon. Andre’s floor tiles meld so perfectly with the boogie platform I’m amazed no one thought of it before. While the newer art dominates the show, there are two notable older artists that were deservedly included: James Bidgood, whose “Five Photographs: Untitled” (c. 1967/2005) are a pretty and sweet homage to Tony Duquette, and Alvin J. Balthrop’s Ashes from a Flame photography series (1975–1986) that portrays Manhattan’s West Side Piers (his chosen monument) before the dawn of AIDS. Balthrop’s black and white images are striking and capture the lives of men who found sex by the Hudson. It is remarkable that most of the men in the photos seem distant and romantic—they feel part of a very remote era.

While some works are more successful at grappling with the notion of the museum than others, Christopher Clary’s “The Man (AA)” (2005) is the only one to take the institutional form seriously. He presents AA Bronson in a manner that maintains his hero’s quirks while creating something that is a celebration of the man and his ideas. Like an updated Roman marble bust that revels in detail and the personality of the sitter, the slide projector shuffles images of AA Bronson that oscillate from the posed to the natural. “The Man (AA)” has a meditative quality that seems to teach you something about its hero; it is an unspoken lesson that doesn’t exist in most of the other Homomuseum works. No need to know that he was a founder of the art collective, General Idea, you can sense the man’s humor, humanity, and love of life. Clary allows his hero to emerge unhindered by artsy pretension.

In an age when sex discrimination is rapidly eroding, it is assuring to see Homomuseum seemingly prove what most of us knew all along: LGBT art has permeated mainstream discourse and doesn’t look much different from any other. Robbed of the shock of Robert Mapplethorpe or the once surprising queer domesticity of Nan Goldin, Homomuseum suggests that queer isn’t all that queer anymore.

On its 100th Anniversary, the World's First Electronic Instrument Continues to Awe

The theremin was created accidentally when an eccentric Russian scientist named Léon Theremin was experimenting with electromagnetic fields.

Emily Hashimoto's A World Between

In 2004, Eleanor Suzuki sees Leena Shah in an elevator in their college dorm. For Eleanor, it’s love at first sight (or at least young lust); Leena isn’t so sure. From that moment, we see the development of their friendship, intense love affair, its collapse, and later coincidental meetings that complicate both their lives.