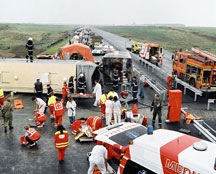 The New Museum was founded on a social agenda that was loosely associated with what now sounds academic: “Art holding a mirror to society.” This motto had more sway during the museum’s founding in the late seventies than most of us would expect today, especially considering its temporary location in the latest center of the art world, the Chelsea Museum on 22nd street. Times have changed. But although the New Museum is in the process of changing as it builds a large state-of-the-art museum on the Bowery, it has not lost touch with the origins of its mission; instead it has broadened through an international agenda. For example, a new video project titled Three M is displayed in the basement of the building. Three M is a part of a multi-funded project in conjunction with the Hammer Museum in Los Angeles and the Museum of Contemporary Art in Chicago and, in Aernout Mik’s case, the Mondriaan Foundation and the Consulate General of the Netherlands. Mik’s new video Refraction is a high-budget Hollywood-type production, on the level now considered museum-worthy by art market standards. And though Mik keeps up with the Mathew Barneys and Sarah Morrises, he maintains a strong impulse to reflect the social in his art—in this case, contemporary society’s response to tragedy.

Refraction is one of three videos projected simultaneously in the lower galleries of the New Museum and the first to be encountered by the viewer. The video is projected on a low dividing wall that sprawls diagonally from either side of the gallery. The projection is itself smashed into the floor, rising from the ground to about six feet. The wall, described in the guide provided as “broken,” is closer to a designed angle, letting the video be seen from three sides, as if it were falling back in space. This broken wall also cleverly mimics the scene we are witnessing: the twisted shell of a commuter bus.

The video seems to run in slow motion and follows neither a storyline or grand narrative. Along a lonely Dutch highway, we are introduced to a crime scene/accident/terrorist bombing. Sprawling along this interstate, a white commuter bus has split in two, the front half twisted and turned upon its top. Time is at a standstill and Mik steady-cams through the wreckage and swoops overhead on cranes. His camera combs through the wreckage in pace with the actors: policemen, firemen, forensic specialists, emergency workers in chemical suits, a scraggly platoon of army infantrymen and a few dozen bystanders lumbering around their dead-ended cars. The disaster looks major, yet we are never introduced to any of the victims. In fact, there are no body bags, nor is there any blood present, which makes us wonder if this is actually an emergency or just a terror drill taking place deep in the heart of nowhere.

Mik as an artist has always kept his distance. He is known for his rubbernecking photos of emergency scenes and, through the medium of video, we now are allowed to get in close to investigate them, or at least as close as he allows us. Once Mik looses interest in his props and silent actors, he pans out of the scene to a nearby farm with its wallowing hogs. About half way through the looped video, his controlled set is split by a parade of sheep and goats. The use of the animals is a cheap trick—their parade looks out of place and a bit too contrived. I am sure that their presence is a gesture to Flemish landscape painting, but in the context of the set, they seem to be nothing short of a visual metaphor to tie up his disaster mystery. The animals stand in for us, not as viewers of art but as witnesses to a tragedy. European artists, like Mik, seem to get the green light to use metaphors in this way. In the case of this video, Mik’s usual role of the distant artist/director is a problem. He gets to stand on his pedestal and tell us that we are all sheep, unaware of what surrounds us.

What Refraction does well is that it resembles almost any disaster scene, and we today have many to pick from. Open the paper and read about our war on terror: bombings in London’s underground, suicide bombers on buses, constant car bombs rocking Baghdad. These images, printed and televised, are much like that of Mik’s portrayal of mangled objects covered like ants with emergency workers and soldiers. It is generally hard as the viewer to find empathy for the victims of such attacks, even when the papers or television diaries profile them: soldier, 22 years-old, dead in roadside bomb, leaves behind a wife and one child, and wanted to teach kindergarten when his tour of duty was up. We can read and watch each one of these profiles, but just as in Mik’s video, the victims dissolve away and what we remember is the scene of the crime. We are momentarily awed by the spectacle of such events, and then as we close the paper or turn off the television, we get on with our day.

Refraction is a tragedy without empathy. It does reflect the real world: one of disaster and disorder without recognizable victims. The question remains, though, whether Mik’s art is relevant in light of our current global situation. Warhol’s car crash series is a perfect example of how the repetition of disasters in the mass media as well as art dulls our sensitivity to their tragedy. That was in the early sixties at the start of another confusing war. In light of Warhol, Mik’s video seems a bit boring, if not wimpy. But barring any political take on Mik’s event, all the viewer is left with is time wasted bottlenecked from a traffic accident. Large tragedies play out on television everyday and yes, the rest of society walks on by with merely a glance. It is the perfect mindset to not only view a war, but to allow a government to wage one as well.

An artist gives a museum lecture in the guise of Dr. Zira, the chimpanzee/psychologist character from the 1968 movie Planet of the Apes.