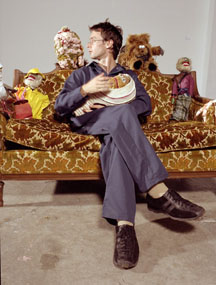 It’s been a rough year for Captain Clamp. The cabin boy whom he loved is dead—killed inadvertently by his own hand. He’s having heart trouble. To make matters worse, life on the high seas has hit the economic doldrums; in his own words, “plundering fell below first quarter expectations.” Clearly, the piracy bubble of the 1700’s has burst.

Clamp may be a Balinese rod puppet with a green complexion and bad teeth, but on the Bowery Poetry Club stage he has earned a loyal band of sympathizers. Clamp is one of the central protagonists in Jollyship the Whizbang, a self-proclaimed “Pyrate Puppet Rock And Roll Sea Saga,” a multimedia effort that take silliness very seriously. In 2001, writer Nick Jones and musician Raja Azar created a skit about a depraved band of pirates that has since evolved into an ambitious aggregate of puppet theater, rock band and vaudeville review, leaving in its wake an album (“Songs to Drown By”), a devoted hipster fan base, and six “episodes” in a series of sequential rock operas, including Sleepless Fishes, which enjoyed a successful eight-month run at the Bowery in 2004. The show has been performed in San Francisco, Fort Worth and Vancouver, in addition to local music venues The Knitting Factory and The Hook.

In the latest installment, now playing at the Bowery Poetry Club through July 28, the pirates have found themselves in the New World, where the Captain and Jack—the token crustacean—are enlisted by missionaries to convert the natives to Christianity in return for “cash and prizes.” The scheme to restore their riches doesn’t sit well with the first mate (played by Azar) who is inconveniently revealed to be Jewish. Invoking the loopy, mock historic grandeur that pervaded its predecessors, the show is titled Crabquistadors: Scavenger of God.

That Whizbang’s genre-spanning brand of absurdity defies categorization is, in part, the intent of its creators, who regularly employ the term epic saga. “The most challenging and most rewarding thing about our show is that we’re using every medium,” notes Brooklyn-based Jones, who professes that Whizbang is about “realizing the perfect multidisciplinary art form.” These are aspirations that some might deem suspiciously lofty for a “nautically-inspired” rock musical laden with bawdy jokes and a menagerie of drug-addled, Henson-esque sea creatures.

But Whizbang makes a solid case that artistic innovation and grandiosity need not be confounded with tastefulness. Low budget showmanship, improvised dialogue and a predilection for ribaldry imbues the episodes with a spirit of joyful anarchy. While critical to the show’s audience appeal, this illusion of spontaneity often conceals the meticulous degree of precision and labor harnessed to synthesize its many components. (In Whizbang, everybody multitasks: the onstage band often doubles as the crew of the ship.)

Like other epics, Whizbang’s origins can be traced to more than one source. Jones and Azar have been collaborating since their undergrad days at Bard College. Searching for post-collegiate performing outlets in NYC, they discovered Bindlestiff Family Cirkus. Enticed by the opportunity to create spectacle with a minimum of production requirements, they joined the raunchy vaudeville—bastion as roadies, honing their skills while doing tech and music direction. When Azar went to visit a sibling in Bali, Jones quit his day job to take part in the expedition. They returned with a traditional puppet—an archetypal patriarch character—who would soon be reborn as the dentally-challenged Captain Clamp. Clamp made his stage debut at the Cirkus’s open mike night, where Azar and Jones—further inspired by a pirate-themed, Harlequin-style bodice ripper, presented a musical number that longtime fans still clamor for at encores:

Remembers Keith Nelson, co-founder of the Cirkus, “They had us rolling in the wings.” Whizbang was born. The Balinese puppet went body surfing afterwards.

As the concept expanded, Jones and Azar—now self-taught puppeteers—recruited former classmates from Bard to enhance the musical accompaniment. Jones was invited to bring the work to the Bowery by the club’s proprietor Robert Holman, populist magnate of the downtown performance scene. Holman, who had taught Jones in a poetry performance class at Bard, was impressed by the scripts, which he likens to the “surrealist tradition” of Charles Ludlam. Upon Whizbang’s arrival, it elicited “an audience that began to come repeatedly.”

Azar acknowledges that Whizbang is experiencing growing pains as it becomes progressive larger in scale. The set must be assembled and taken down in 15-minute shifts, and rehearsals now accommodate the schedules of eight artists, including a sound and lighting designer, the five piece band, and two additional puppeteers. This has not prevented the group from welcoming their youngest collaborator yet: Jones’s seven-year-old daughter Teja, who co-wrote the catchy song “Converting to Christianity” with her father.

Jones and Azar have adopted an even-handed approach to song writing in which the story is sometimes written to accommodate the musical numbers, which are intended to advance the narrative as well as stand on their own. As in the preceding episodes, Azar’s melodies for Crabquistadors pay cheeky homage to pop convention while allowing every musician a chance to ham it up. In Sleepless Fishes, chameleonic vocalist Jones grimaced and growled with such conviction that it was easy to forget that the songs’ object of forbidden desire—the cabin boy—was played by a stuffed clown with a minimum of facial features.

Clearly, Jones and Azar enjoy setting up and then defying expectations as to how seriously we should all be taking any of this. Is there any concern that their quest to “realize an ideal of multimedia performance” might be undermined by its subject matter? Says Jones, “my attitude is if you give enough care and devotion to something, it eventually will transcend what it appears to be at face value. Because we’re naturally drawn to the absurd, we believe we can apply as much intelligence and craft to our ‘silly’ themes as anyone to a ‘serious’ one.”

With Crabquistadors, its creators are serious about exploring some new territory, attempting to ante up the narrative cohesion and technical complexity, not to mention a direct foray into topicality. While right-wing religious fanaticism is currently an easy target on downtown stages, it is hard not to be won over when one character chastises, “You’re welling in the mire of a different interpretation of scripture!”

Although the latest episode finds the characters on dry land, Jollyship the Whizbang is by no means done with voyages. The cast is slated to take part in the Dublin Fringe Festival in the fall, followed by a festival in Thailand. In anticipation of future episodes, Jones and Azar entertain visions of television or off-Broadway, but they are quick to note Whizbang seems to flourish when performed cabaret-style, maximizing spectators’ access to both the events on stage and to alcohol, both of which are usually heavily rewarded with ebullient audience participation.

From Jones’s and Azar’s perspective, they have earned the enthusiasm. Prior to their Bindlestiff show, the artists found themselves on board a ship en route from Seattle to Alaska, and decided puppets would be the ideal medium for producing Ionesco’s Bald Soprano. Convinced that their fellow vacationers harbored a latent appetite for some existentialist theater, Jones and Azar laid out a sleeping bag across two deck chairs for a stage. Upon noting the audience’s limited attention span, they discovered they were being upstaged by a whale that had breached the opposite side of the ship.  Since this ill-timed experiment, “we’ve been on a mission of revenge against that whale,” Jones deadpans. “It’s a Captain Ahab-like monomania.”

For more information, go to www.thewhizbang.org. Performances are at the Bowery Poetry Club through July 28, Thursdays at 10 pm and Sundays at 8 pm. Tickets are $8 and can be purchased at the door or at www.virtuous.com.

What To Do When You Grow Tired of Words

In her luminous and searching essay, theatermaker Jeesun Choi uses her multifaceted identity as a springboard to explore the social justice-oriented words, acronyms, and phrases that have flooded our world over the past year—and how these words might be, and only be, shorthanded expressions unable to fully unpack increasingly complicated issues.