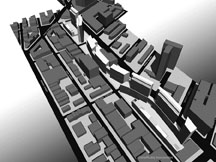 “Perspective rendering of the Extell proposal: A saner vision for the Atlantic/Vanderbilt Yards?” Image from Cetra/Ruddy Incorporated

The month of June began with over 500 critics of Forest City Ratner’s Atlantic Yards proposal marching over the Brooklyn Bridge from Borough Hall to City Hall, voicing dissent to what they view as a sweetheart deal between the developer and the power brokers of the city and state.

The image of marching Brooklynites found its way into an odd New York Times article from June 9th, accompanied by copy that positioned opposition to the project as dwindling, while casting ardent supporting groups such as ACORN and BUILD as latecomer converts to the Atlantic Yards cause—which they have publicly supported from the outset.

The Times’ lopsided coverage of the Atlantic Yards (including an interview with Ratner in which we learn he does not use steroids) would serve to buttress a month full of seemingly positive occurrences for the developer and his supporters: the announcement of the Kelo v. the City of New London U.S. Supreme Court Decision, the launch of Forest City Ratner’s Brooklyn Standard, the release of the Community Benefits Agreement, as well as the unveiling of Frank Gehry’s latest concept for the proposal.

On Thursday, June 23rd, in a 5-4 decision, the United States Supreme Court upheld the City of New London’s right to use eminent domain to take property in order to convey the land for use by a private developer. Justice John Paul Stevens wrote the majority opinion, stating: “clearly, there is no basis for exempting economic development from our traditionally broad understanding of public purpose.” The courts’ affirmation of municipal land grabs for developers was not total, however. In his concurring opinion, Justice Anthony M. Kennedy noted that “transfers intended to confer benefits on particular, favored private entities, and with only incidental or pretextual public benefits, are forbidden” by the Constitution.

Justice Sandra Day O’Connor in her dissent cautioned that the decision could create an environment where: “Under the banner of economic development, all private property is now vulnerable to being taken and transferred to another private owner, so long as it might be upgraded.”

The Kelo decision will likely prove to have far reaching consequences for property owners all around the United States as the years progress, but for those threatened by eminent domain as a result of the Atlantic Yards, the high court’s judgment left room for hope. “We believe there are serious legal challenges to Ratner’s use of eminent domain,” notes Daniel Goldstein of Develop Don’t Destroy Brooklyn, who also owns a home within the boundaries of the proposal. Citing Justice Kennedy’s opinion, he notes that it would be difficult for Ratner to demonstrate public benefit that would warrant the seizure of private property.

Another important aspect of Kelo is that it defers to the states with regard to how eminent domain can and should be used. Utah’s Senate Bill 184, signed into law in June, effectively bans the use of eminent domain by redevelopment agencies. Opponents of the Atlantic Yards and other property rights advocates are “looking to pressure New York State legislators to call for reform of eminent domain [law],” according to Goldstein. Reforms of the same scope as the Utah law would not only stop the Atlantic Yards, but would change the nature of organizations such as the Empire State Development Corporation.

Apparently dissatisfied with the coverage of the Atlantic Yards proposal by local newspapers, Forest City Ratner has gotten into the publishing game. The Brooklyn Standard hit newsstands in mid-June. According to Barry Baum, Forest City spokesman and Editor-In-Chief of The Standard, the publication fulfills the developer’s promise “since the beginning of this project to be open and provide as much information as possible.” Despite its newspaper-like layout, its masthead, and its “Letters to the Editor” section, Baum insists that The Standard is not a newspaper but a “publication.” He mentions, “we’re saying right on the front that it is a ‘Forest City Ratner Publication,’” in response to the assertion that The Standard’s tabloid-look might confuse or mislead readers into thinking they are reading an actual journalistic endeavor.

Patti Hagan, an opponent of the arena and towers, is unsure if it is that clear. “It is misleading,” she asserts. “I found a whole stack of [The Brooklyn Standard] on my newsstand where I go to buy real newspapers.”

It isn’t just neighbors or opponents that are confused about the purpose of The Brooklyn Standard. In the “Letters to the Editor” section of the publication, Mayor Bloomberg and State Senator Martin Malave Dilan each wrote letters welcoming what the Mayor referred to as a “paper.” The Mayor’s office had no comment on his letter. When asked if he was aware that The Brooklyn Standard was a release of Forest City Ratner for the purpose of promoting the Atlantic Yards, State Senator Dilan replied, “No, I was under the impression that it was a newspaper.” As to whether he would still have written his welcome, had he known better: “I don’t think I would have written a letter, no,” the Senator conceded.

June would also mark the long anticipated arrival of the Community Benefits Agreement (CBA). The CBA was unveiled at Fulton Ferry with Mayor Bloomberg on hand to lend a legally irrelevant witness signature. The document, a contract between FCRC and eight community groups, has been touted as a major victory for the developer and for Brooklyn as a whole.

It details a number of initiatives expected to be implemented as part of the Atlantic Yards project, including: set-asides for minority hiring during construction, a pre-apprentice program for membership into the unions, a health care center, an intergenerational facility, and the 50/50 affordable housing model put forth by ACORN and Forest City in the Affordable Housing MOU released the previous month.

The agreement reads more like a wish list than the ironclad contract. The devilish details of how these programs might be implemented—and what Bruce Ratner is on the hook for should they not materialize—have been left to a series of Project Implementation Plans (PIPs), which are still in negotiations. The meat on the bones of the CBA cannot be fully known or fairly assessed until that time.

Should the designated groups fail to complete the PIPs within 120 days of the CBA’s June 27th release, the whole agreement goes into default. Marie Louis of BUILD, for one, is not concerned that they will be unable to meet the deadline despite the protracted nature of the initial CBA negotiations. “We’ve really already started our implementation plan,” she says, since the PIPs were initially being contemplated and developed for release in one larger CBA document.

Bertha Lewis of ACORN is also confident that the PIPs will be developed within the allotted window. “I don’t think it’s going to be as difficult as the CBA,” she considers, “since at the time [of those negotiations] we were doing something new.”

It should also be noted that, as anticipated, the contract will not have state or city enforcement. Lewis does not anticipate difficulties with this detail: “The housing piece has built-in enforceability since we had to negotiate with HPD,” she says, and she believes “the other pieces don’t really call [state oversight] into question. None of them have the state or city signing off.” Forest City Ratner did not return phone calls or e-mails for comment regarding this issue.

City Councilwoman Letitia James calls the CBA an “individual benefits agreement,” and a “paper tiger.” She questions the lack of government oversight and adds, “It has a lot of escape clauses that are vague.” She also finds concern with the organizations that aren’t involved, such as the unions and commercial tenants. BUILD’s Louis expects to have agreements with the unions ironed out in a project-labor agreement that will become part of the job’s PIP.

The scope of organizations involved in the CBA was once again called into question with its release. “It’s only eight groups—some of whom I’ve never heard of before,” quips Patti Hagan. She additionally believes that some of the signature organizations “only consist of one person.” Of the groups involved, only three had been mentioned by Forest City as participants prior to late May.

Bruce Ratner’s magical June would extend a few days into July with the release of photos of Frank Gehry’s revised plan for the Atlantic Yards. Creating a cityscape of cartoonish villainy, the architect plays fast and loose with perspective as towers protrude haphazardly on the 22-acre blank canvas Bruce Ratner expects to create from rail yards and a demolished neighborhood. Like a section of Tim Burton’s Gotham City, the models cast ominous shadows in fake night, out of scale and out of proportion with the neighborhoods surrounding. Garishly shaped buildings jut at odd angles as if they had erupted fully formed from the ground below. Others are bathed in red from Nets insignia lights that for some reason burst forth from the arena.

In creating this comic book interpretation of the classic city skyline, and making every effort to clash with the buildings in the existing neighborhood, Gehry is realizing in steel and glass Ratner’s bombast. The developer’s proposal, whatever its possible benefits and detriments to the area, fulfills through Gehry its ultimate purpose of cementing Bruce Ratner’s Brooklyn legacy. It is the developer’s monument to himself.

At the eleventh hour, Extell Company has entered a bid for the MTA Atlantic rail yards, according to a press release from Develop Don’t Destroy. Calling for 1,960 units of housing, 116,000 square feet of retail, and a community center in 11 buildings ranging from four to 28 stories in height, the proposal has the potential to cause residents and politicians to rethink Ratner’s vision. Given the hubris the developer has demonstrated in his activities over the last month, this is not a bad thing.

June Canedo de Souza is a Brazilian artist based in New York.