Both Bertolucci and [Ingmar] Bergman, like spiders, weave their films out of their own neuroses and inner conflicts. Their films are best regarded as psychodramas, in which the characters represent projections of different aspects of their creators’ divided psyches. 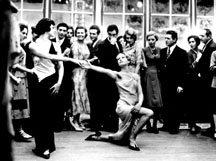 Images from The Conformist, Courtesy of Film Forum

Expanding their extraordinary list of refurbished, impossible-to-see masterpieces, Film Forum will show Il Conformista, Bernard Bertolucci’s opera of Italian Fascism and sexual repression, from July 29th through August 11th. This newly restored print, which features four minutes lost from the original American cut, is the only way to see The Conformist in its original state. There is no version originale available in any home video format. (The U.S. market VHS tape is clumsily dubbed.) The restoration was personally overseen by cinematographer Vittorio Storaro (for Bertolucci, he also shot Last Tango in Paris, 1900, The Last Emperor, and The Sheltering Sky; for Francis Ford Coppola, he photographed Apocalypse Now, One from the Heart, and Tucker:  The Man and His Dream).

Storaro’s style is one of intense lights and darks, and of fluid camera moves, often in the most impossible situations (cf. The Sheltering Sky). Bertolucci does not seek the perfect visual metaphor for the emotional valence of a scene—like, say, Howard Hawks. Bertolucci prefers to make everything as beautiful, sumptuous, and difficult to photograph as possible, a tendency that fueled the debate surrounding Last Tango in Paris and, to a lesser degree, Il Conformista. That debate in a nutshell:  I like the frosting, where’s the cake? That said, the visual poetry of Bertolucci/Storaro is seldom pure decadence—form without content. Their excesses reflect a cultural, psychological complexity, and a rare grasp of how camera movement affects emotion. Il Conformista is their finest moment. The relentless sublimity may wear your ass out or put you in an ecstatic trance. 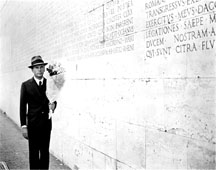 Does all this style serve or distract from the plot? Bertolucci manages, in a way that few following him could match, to make his Baroque excesses merge with—if never exactly serve—the story. The former carries greater meaning and seems nearer to the director’s heart than the latter. With, say, Welles, to search for an appropriate comparison, the story never exists only to support one or two bravura camera maneuvers. With Bertolucci it just might.

Our Conformist is an anonymous bourgeois (Bertolucci’s favorite kind). Tormented by memories of a homosexual liaison in his youth and desperate to squelch his inner confusion, he joins the Fascist Party in pre-war Italy, seeking a perfect mass identity to replace his own tragically flawed individuality. This cultured, repressed Everyman marries a passionate but idiotic woman—representing the destructive lure of the bourgeois life for the outsider/artist—in an attempt to become normal, to belong, to conform. Intrigues follow, and the plot, which races about in time like a Nicolas Roeg film on methedrine, remains fairly conventional. For Bertolucci, that is.

While presenting this story, Bertolucci undertakes nothing less than a visual history of the cinema, employing every style from the earliest days of silent film onward. As the plot advances, the cinematic style grows increasingly modern. Alienation, sexual confusion, Oedipal rage, incredible risks taken to slake momentary lust, betrayal, nice clothes, and lovely interiors:  classic Bertolucci themes, fully explored here for the first time.  Il Conformista remains one of the most beautiful films and certainly Bertolucci’s most coherent work, an accomplishment of genius. It’s never tedious, pretentious, or overly arty. It can be disturbing as hell.

Raised in a wealthy, cultured household, son of a noted Italian poet, Bernardo Bertolucci proved a prodigy in poetry and literature. Sophisticated and well-connected enough to be hired as Pier Paolo Pasolini’s assistant at 21, Bertolucci had just won a literary award for his own book of verse. After working with Pasolini, Bertolucci launched his own career, which included co-authorship of Leone’s Once Upon a Time in the West. BB’s films before Il Conformista use a snail-like pacing to suggest greater profundity than the stories supply. Happily, with The Conformist BB achieved a more universal standard of art-film pace. While slow, it’s not unbearably so and events unfold appropriately. 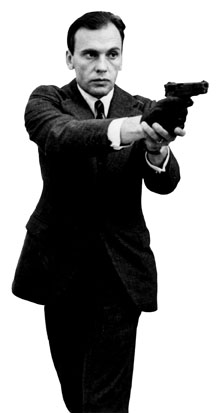 All of Bertolucci’s films (save the twin embarrassments of The Last Emperor and Little Buddha) first concern cinema itself, addressed through a constantly moving camera (a modern version of Max Ophüls), naturalist lighting, character-revealing mise en scene, and editing that drives the narrative while unveiling character psychology. Bertolucci’s earlier films feature complex, opaque plots. The story and characters serve primarily to express Bertolucci’s own inner conflicts and confusions. These are ample.

For a man who came of age in the shadow of Bergman and Godard, Bertolucci has a surprisingly Fritz Langian obsession with the irresistible power of fate—viewed through a distinctly un-Langian stew of never-quite-convincing, limousine-Marxist politics, doctrinaire Freudian analysis, and an ever-increasing nihilism (wait!—maybe ever-increasing nihilism is Langian). Bertolucci mirrors Lang in his obsessive depiction of the paralytic, quirky, and totalitarian shifts of human moods, emotions and sexual desires.

Given Bertolucci’s ambition and ability to hold a grudge (just read the stories of wardrobe one-upmanship wars with John Malkovich on the set of BB’s underrated The Sheltering Sky), it’s no surprise he adapted Alberto Moravia’s novel Il Conformista (The Conformist). Hadn’t Godard made his masterpiece, Le Mépris, from an eponymous Moravia novel? And if playing dueling adaptations with Jean-Luc wasn’t provocation sufficient, Bertolucci gave the character of a doomed, cranky professor Godard’s real-life Paris address and phone number! Bertolucci hired George Delerue, who composed the score for Le Mépris, to create the soundtrack for Il Conformista. In case we still might not get it, a woman in Il Conformista says of the old professor, “He’s a typical intellectual:  disagreeable and impotent.” So many Bertolucci films showcase the son’s need to murder Dad, and clearly Godard functioned as Bertolucci’s bette noire.

Bertolucci’s dialogue illuminates character and seldom supplies narrative drive. The spoken word is often an attempt on the character’s part to conceal, to spar verbally with another or to defuse a character’s emotions by saying the opposite of what the character truly feels. Bertolucci’s dialogue is modernist; he wants his characters to speak as clumsily, as self-blinded, as they might in life. Bertolucci’s reliance upon naturalist dialogue creates the necessity for naturalist acting. As he proved in even his worst work, BB is an extraordinary director of actors. He strives for natural performances—in the style of Italian Neo-Realism and Jean-Luc Godard. Though Brando chews the scenery in Last Tango, his performance is never unconvincing and he never (quite) goes over the top. The actors in Il Conformista serve a more symbolic function, while, for example, The Sheltering Sky features the most natural, complex and moving performances in a Bertolucci film.

Since BB’s films spring from his tortured and complex psyche, the assumption is that he understands all sides of the turmoil his characters face, and is expert at explaining that torment to the performers. Bertolucci casts with insight, and his choices, though seldom predictable, become so fused with the characters they play that it is impossible to imagine his films re-cast. That is particularly true of Jean-Louis Trintignant in Il Conformista.
Bertolucci’s tolerance for boredom far exceeds my own. He prefers a slow pace and even slower, more elegant camera movements. Proof of his genius is that he can drag a scene out until time seems to stand still, yet his actors move and speak with what appears to be a perfectly natural cadence. Given that his mentors were Pasolini and Godard, two men who could not care less about dramatic flow, it’s unsurprising that pace is Bertolucci’s weakest link. However, few directors can touch him for proper pace, cadence or rhythm within a scene.

Once Bertolucci has established the basic relationships between characters, he edits for the sake of art, not narrative or character insight or climactic moment. Bertolucci edits to connect his beautiful, complicated camera movements; there is no director working who can move the camera with such narrative and emotional power. Il Conformista can be frustrating because there’s such power in the camera movement, but that power reveals little of what underlies the characters’ motives—they can remain ciphers and it’s frustrating. The visuals define the space in which we observe the characters. And that space—designed to an elegant fare-thee-well—is supposed to be all we need to understand their motivations. Sometimes it is, sometimes it ain’t.

In Bertolucci we have the consummate auteur:  poet, designer, visual genius, psychological empath, ambitious bastard. Does he care about his characters, or is it all Opera? Is this human suffering—so accurately drawn and compassionately depicted—just an excuse to create beautiful scenes?

“Non Ti Schiantare”—On the Road to Rome and Fascism

A hundred years after Mussolini’s March on Rome, Italy is once again asserting itself as a laboratory of the Western world, with a party directly descended from historic fascism headed for power. Faced with this situation, a Calabrian writer friend recently invited us to come and learn from his people of Aspromonte. These descendants of shepherds and Greek philosophers of millenia past have an saying redolent of centuries of resistance to colonization in the north of Italy: “non ti schiantare”—“don’t be afraid.”

The first African American to sing a leading role with the Metropolitan Opera is cast as Ulrike in Verdi’s Un ballo in mascara. A century earlier when the opera debuted in Italy, the composer was compelled by censors to repeatedly change the setting, first from Sweden to Poland, then from Poland to the United States, specifically to Boston.