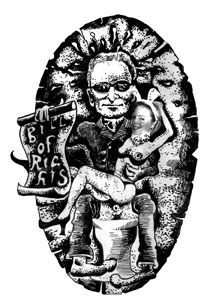 Courtesy to The Brooklyn Rail Collection

Hef sought to answer the critics who accused the magazine of debasing the morality of the country, spoiling the virtue of American women, and convincing young men that girls “folded in three and had a staple where their navel should be.” He argued that Playboy was not, in fact, leading a “cult of irresponsibility,” nor “aiding the decline of the Western world,” and he tried to situate himself amidst the great minds and freedom-loving American patriots of the 20th century.

The philosophy was an ongoing rant calling for free speech, the separation of church and state, and the need for modern “heroes.” Hef lamented the denigration of the “Uncommon Man” during the lean years of the 1930s when aspirations were ground down by economic depression. This, he felt, had boosted mediocrity. Typifying the postwar economic boom and Cold War ideology, Hef celebrated the merits of free-enterprise capitalism, individualism, and free expression as forces that would nurture the heroic “Uncommon Man.” And along the way Hef would meander into topics such as the “forgotten” legacy of Charlie Chaplin and the unfair treatment of Picasso. Then after much philosophical heavy lifting, he occasionally got around to talking about sex.

Embracing a light-hearted humor in his approach, Hef maintained that sex was neither profane nor a “sacred cow.” But even then, hedonism and sexuality ranked far behind religion in Hef’s worldview. He argued that the religious communities of the 1950s and 1960s had been particularly fixated on his magazine—and not just critically. Hef showed that some clerics “sympathized” with Playboy’s “interest in ‘style’ ” and its “revolt against narrow, prudish Puritanism.” He started the Philosophy by citing the critiques of a Jewish professor, a Methodist reverend, and Unitarian minister, and ended the series over two years later with a four-part transcription of a “religious roundtable” that was broadcast by station WINS in New York. The roundtable focused on The Playboy Philosophy and the emerging American sexual revolution.

The panelists were a Catholic priest, “well-known for his interest in...jazz,” an Episcopal minister, a rabbi, and Hef. The roundtable had been organized “in cooperation with the Archdiocese of New York, The American Jewish Committee, and The Protestant Council of the City of New York,” and of course, Hef, “president of...the whole Playboy empire.” With all this attention, he might as well been the president of sex itself.

The panelists discussed issues like—once again—the separation of church and state, the separation of sex and love, and the role of pornography in promoting teen delinquency. Notably, Hef critiqued mainstream religion for regarding women “as a depersonalized object, or possession, by continually associating her with its antagonism toward sex.” The religious leaders offered no rebuttal.

Another focus of the philosophy pages was the Cold War. Hef saw his magazine—and thus himself—as doing battle with the prudish drab menace of Soviet socialism abroad and creeping collectivism at home. He felt that the Soviet Union had “caught up” to the US in the years after World War II because America had “drifted dangerously in the direction of socialism during the 1930s and forties” and thus “stifled her natural growth” with “initiative-inhibiting taxes and restrictive legislation regarding the roles of labor and management in business.” To combat this, Playboy attempted to “motivate a part of our society to work harder, to accomplish more” and was thus “contributing to the economic growth and strength of the nation.”

On this point, Hef wasn’t entirely wrong. Conspicuous consumption, that great American pastime, was a much larger part of the Playboy lifestyle than the naked girls, who were just one of the commodities being sold to randy, professional class bachelors. But unlike the pessimistic right wing of his era Hef presented a cliched, even cartoonish, gosh-darn, Kennedy-era optimism: “For today in America, a new generation is taking over—with all the upbeat spirit, questing impatience and rebel derring-do that are needed to put the US back in the position of unquestioned world leadership.”

The editorials were often meandering and repetitive, or as Hef himself put it: “The Playboy Philosophy is a sometimes rambling, disorganized discourse...a succession of ideas and feelings that vie for expression...This more direct, organic approach suits our purpose, since the Philosophy is intended as a living statement of our beliefs, our insights, and our prejudices.” Anyway, it reads like so many of my college students’ term papers that rely too heavily on Microsoft Word’s “Thesaurus” function to insert words they don’t actually understand. Given the magazine’s reputation for literary elegance, which was established in its early days, one has to wonder if many readers didn’t notice how many times Hef argued for a reformulated notion of religion that honored the “harmony of the mind, body and soul,” or how often he told us that “we believe wholeheartedly in the Uncommon Man and in his right to be uncommon.”

The writing is so filled with flighty platitudes that one begins to suspect that Hef just liked to hear himself talk, and as editor and publisher of the magazine he had the right to do so. If he hadn’t hit the jackpot with Playboy, Hef would be the nerdy guy at parties that insists on telling you lots of stuff you don’t care about or already know. Really, he was not obsessed with young, naked blondes, but rather he was and remains obsessed with himself, so much so that for many years now he has employed a professional archivist to document every detail of his personal life for posterity. Viewed through the prism of the Philosophy, Hef’s Playmates were really just tools used to construct a world revolving around Hef, the ultimate male ego.

Above all, the Philosophy, like much homespun unsystematic American wisdom, was a study in contradictions. The magazine came out in favor of civil rights, yet Hef wrote that the real reason Americans ultimately shunned Charles Lindbergh in the 1930s was not for his dalliance with Nazism, but rather because downtrodden Depression-era America had come to resent heroic men. While very conservative and elitist in its drive for free enterprise and explicit anti-communism, Hef nonetheless critiqued McCarthyism for promoting conformity and stifling free expression. For him anti-communist hysteria had no place in the world of art and literature. Further, by the mid-1960s, Hef and his magazine had in one way or another taken a stand against censorship, for legalized birth control and abortion, and defended of the rights of gays and lesbians who in those days were referred to by the clinically polite term “homosexuals.”

As a feminist historian, I began studying Playboy expecting to be offended by the magazine’s juvenile fixation on naked ladies. Indeed I have those moments. But in this age of cynicism and played-out irony, one cannot help but be charmed by Hef’s nerdy sincerity when, for example, he humbly admits: “We must confess that we feel closer to our readers while working on each new installment of The Playboy Philosophy than we have at any [other] time...” He really means it, and unlike us he wasn’t joking when he called it a “philosophy.”

So often associated with mere frat-boy sexuality, Hef’s magazine was much more than that—maybe not as much as he would like to think, though the magazine did outlast the Soviet Union. Founded in 1953, Playboy appeared at a time when the country desperately needed to lighten up. And forty years after the strange formalization of the magazine’s Philosophy, it is clear that many of us are just as obsessed with Hef as he is with himself….or maybe almost as much so. Recently, officials in Chicago christened one of the city streets “Hugh Hefner Way.” He has rung the bell at the New York Stock Exchange and his Bunny logo is as ubiquitous as Nike, Coke, or McDonalds. I am struck by how many Bunny-emblazoned shot glasses, socks, and panties fill novelty shops. Today there seems be a kind of Playboy revival—if not of the magazine itself, then of its cultural iconography.

Playboy symbolizes to sixteen-year-old girls who wear it on their tight little t-shirts. To an older generation of men, and certainly some women, however, I think it represents their coming-of-age. This magazine taught them about sex and accompanied them on their journey into adulthood. I recently passed an art gallery that had an enormous framed print of Hef and his Bunnies displayed on the sidewalk, probably taken sometime in the 1960s. I watched several passing men stop and gaze – not gawk – but reverently gaze at the photo. The Bunnies were not posed seductively, and by today’s standards those costumes are certainly not revealing. The gazes were less about desire, I think, and more about nostalgia. You could practically see memories of childhood passing through the men’s minds.

Though it may be bizarre and retro, The Playboy Philosophy addresses issues that are still relevant. Free expression, the separation of church and state, and American foreign policy are at least as problematic today as they were during the “duck-and-cover” days of the Cold War. And maybe Americans, who are now sexually liberated in a crass and commercialized way, could still lighten up about sex. But in this intellectually bankrupt age of men’s magazines like Maxim and TV programs like The Man Show, perhaps what is most instructive about the Philosophy is how it points out that pop culture need not be merely mindless, it can be simultaneously frivolous, politically engaged and take ideas seriously.

Carrie Pitzulo is a Ph.D. candidate in American history at the CUNY Graduate Center.

With Dylan, a few words go a long way. Nothing is belabored. When you are discussing songwriting, and you are arguably the finest songwriter of your era, it needn't be. I wouldn't call it shop-speak, it's more insider knowledge.

Chime Lama (འཆི་མེད་ཆོས་སྒྲོན།) is a Tibetan American writer, translator and multi-genre artist based in New York. She holds an MA in Divinity from the University of Chicago and an MFA in Creative Writing from Brooklyn College. She serves as the Poetry Editor of Yeshe: A Journal of Tibetan Literature, Arts and Humanities. Her work has been featured in Exposition Review, The Margins, Street Cake, Volume Poetry, Tribes Magazine and Cadernos de Literatura em Tradução, n. 24 (Notebooks of Literature in Translation). She teaches Creative Writing at the Rochester Institute of Technology (RIT). Instagram: @chimi.choden

“I became a pop star because I hated football at school,” recalls a British pop star who was bullied in Catholic school for being “soft” (i.e., gay). “Becoming a pop star was my revenge. Revenge for being bad at football. For not being athletic. For being mocked.”

The desire to archive her own work, which undergirded the philosophy of much of her photographic practice, became a necessity and a means of surviving as an artist. A selection of these portfolios are reproduced in Bettina and their sleek, simple design style informs the zine-like feel of this expansive book.