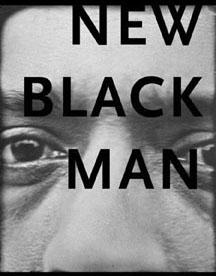 Are you one of those wobbly intellectuals or cultural critics who feels uneasy around strong black men, especially those young black dudes who distrust whites and don’t have a kind word for gays? Guys who love to schtup bodacious black women and still distrust them as bitchez?

Based on the highly original premise that black men are in “crisis” (as if they never been, huh?), Neal’s book argues that the problem confronting today’s black men is that they have been juiced on a retro-masculine identity, the “Strong Black Man,” which they can’t and shouldn’t live up to. After all, if one examines Africa’s post-colonial formation, one gets a good idea of where the Strong Black Man derives from. But the problem is that since African men came here as slaves, facing as Orlando Patterson once called “social death,” their idea of manhood couldn’t exist. As Steele Pulse once sang in “Bad Man”:

Identity formation—“black feminist manhood”—is the heart of Neal’s analysis, which is based on pop culture criticism, the flotsam and jetsam of current academic scholarship. According to Neal, the genesis of the book began with his relationship to Alexis De Veaux, an intellectual mentor, but one suspects it really began at the 2001 Progressive Black Masculinities Conference, which could be also read as “Check Yo’ Balls Outside the Hall.” As Neal contends:

A crisis of black masculinity exists not only in the scapegoated, so-called hip-hop generation, but in the legions of well-adjusted, middle-classed, educated, heterosexual black men, who continued in a powerful American-style patriarchy (often remixed Black Nationalism and Afrocentrism) and its spring homophobia, sexism, and misogyny, represents a significant threat to the stability and sustenance of black families, communities, and relationships.

Only an academic residing in a college town (Chapel Hill) could say that nearly all of the men who get up and go to work—doctors, lawyers, mailmen, police officers, all of the working class and middle class—are a “significant threat” to their families and communities. In effect, Neal is saying that all black men are as guilty as the criminal minded because they don’t embrace “black feminist manhood.” Perhaps they don’t embrace “black feminist manhood,” but instead respect women as people, which does not need a theoretical construct.

The trouble with this formulation is that Neal doesn’t give any evidence to support his conjecture. Is there a survey that takes a look at African American males’ attitudes towards women? Towards gays? Towards gender roles? Are these attitudes broken down by ideological preference, such as Republican, Democrats, Black Nationalist, Afrocentrist? What, exactly, are the attitudes of black men in these matters? As of now, we don’t know. Neal doesn’t really know either, but he acts like he does

Given that blacks are perhaps the most studied people in American society, I suspect that there are studies that could possibly give some insight into these matters. However, Neal basically does the same thing that everyone does. He condemns a wide cross-section of black men of a certain class (he neglects to include working-class black men) and assumes that they share the same attitudes towards patriarchy, homophobia, misogyny. Where’s the evidence?

This is the essential problem with this school of cultural criticism: it eschews other disciplines—history, sociology, political science—and makes sweeping generalizations based on the ephemera of pop culture and narcissistic self-involvement. Anyone can say anything about blacks and needn’t show one shred of evidence to support one’s position. And Neal is a professor at Duke University.

This book is mostly about Neal’s deification of The Black Woman (“Mama Soul”), or, if one uses Michael Eric Dyson’s format in Why I Love Black Women, the trivialization of black women. His father, a man with a tenth-grade education, got up and went to work for his family, is called “homie.” And his mother? She was a woman who “chased bourgeois dreams, agonized over the utter inability of my father to ever find values in those dreams, and always thought that it was important that she be heard.” He asks if his mother was a feminist, and although the question never occurred to him at the time, he concludes that she was.

However, one is hard pressed to understand why she is a feminist. Is it because she strove to be “heard,” or because she has “bourgeois” ambition? If so, that would also make conservative women like Phyllis Schlafly, Laura Ingraham, Ann Coulter, and Condoleezza Rice “feminist” simply because they are heard, and even have power.

Neal doesn’t give one a sense of what feminism is, except that it’s not inherent to those who are born with outdoor plumbing. (One has to be made a Black Feminist Man.) What feminism is and isn’t ought to be outlined, but Neal doesn’t do that. Feminism, at least in America, has gone through at least three distinct stages: the suffragette movement in the mid-to-late 19th century; the women’s liberation movement that came out the late 1960s and 1970s; now, present-day “third wave” feminism which takes for granted the achievements of the previous era and questions old assumptions. What makes a woman a feminist? What makes a black woman a feminist? Today, almost all Americans, men and women, are “feminist” insofar that they accept the basic premise of equality of opportunity regardless of sex. If you’re good at killing people, join the Marines, Alice.

Neal has no sense of history or sociology. Like most intellectuals of his time, he’s (not just) knee-deep but totally head over heels into pop culture and himself; most of his references are to film images and songs, the coin of the realm in discussing criticism, and not substantive incursions into books or ideas. As matter of fact, Neal’s discussion of the images of black men should draw on George Frederickson’s The Black Image in the White Mind, Joseph Boskin’s Sambo, and Donald Bogle’s Toms, Coon, Mulattoes, Mammies, and Bucks, but none of these works appear in 159 pages that are less about thought and more about attitude.

The conceit of this book is that Neal is concerned about a construction of the “New Black Man” from his perspective as a “hip-hop intellectual.” As a professor at Duke (the Princeton of the South), he can afford to avoid such issues as class, lack of money, and education that affect nearly 40 percent of what Martin Kilson called “status static” blacks. These are people are stuck in poverty and social disorganization. Neal can afford navel gazing because his belly is full.

The notion of being a “hip-hop intellectual” is a fraud that informs this class position, and underscores the anxiety that some blacks have become the new black bourgeoisie they oppose. Writing about hip-hop has given some black intellectuals a sense of authenticity that they find missing, especially while they are treated as affirmative action suspects on white college campuses. However, it’s questionable that hip-hop scholarship has produced much knowledge. Instead, it has given rise to a cottage industry of attitude that masks itself as critical thought, and refuses to challenge what hip-hop has become: a cult of social deviance.

The issue of black masculinity is the latest subject for black cultural critics (cf. bell hooks, Kevin Powell, Michael Eric Dyson) because they really don’t have anything to say about the substance issues that have been hijacked by black conservatives: crime, education, money, wealth creation. As a matter of fact, if it weren’t for hip-hop, they probably wouldn’t have much to write about. One can easily be concerned about one’s soul or inner feminism when removed from the rough and tumble world that unfortunately informs too much of many black men’s reality, namely lack of work, violence, and alienation.

This is not to say that certain sectors of the African American male population don’t engage in homophobic practices, or haven’t taken advantage of women sexually, with some liking to have sex with women but not respect them as human beings. Some black men may fantasize about being Strong Black Men; however, what has developed is a “black gender gap,” in which black women are doing better in education and jobs when compared to black men, as noted by both Newsweek and The Atlantic Monthly in 2003.  While Neal mentions numerous films, he overlooks what is perhaps the best film about black “masculinity,” Nothing but a Man (1964). Written by two white men, Michael Roemer and Robert M. Young, and directed by Roemer, the film centers on Duff Anderson (Ivan Dixon), a free and easy railroad worker who marries a preacher’s daughter (Abby Lincoln) in the Civil Rights-era South.

Duff has an uneasy time because he’s resentful of his uncaring father and holds class resentment of his wife’s status; he knows that her preacher father doesn’t care for his ilk. He also neglects his son, and because he’s a proud man he doesn’t kow—tow to the local whites. Frustrated, he physically rebuffs his wife when she tries to console him; he leaves his her and finds his father dying nearly alone in another city. Looking at his life, he realizes that the best thing in his life is struggling with the woman he’s just left and the son he doesn’t bother with. Collecting his boy, he returns to his wife with his son and tells her that things are going to be rough but they are going to make it. Why? They are together and have each other.

A simply told story, it sums up the difference between everyday people and pseudo-intellectuals who are called cultural critics. The former use their raw wisdom and can sometime understand their own limitations on the way to self-correction without writing a pointless treatise. A compendium of pop culture tics, New Black Man is a narcissistic handbook for those who over-intellectualize every goddamn thing, but don’t understand simply that if you want a do-right woman you have to be do-right man. Or as the Naz once said: Do unto others as you would have them do unto you.

There were people running, falling over each other through the dusty street. The Pakistani police, embodying the lessons passed on by their British overlords, swung their lathis as they rushed ahead. Some aimed their pistols while running, yelling, pulling the trigger at every other step. The screaming never stopped.

Speaking with two members of his BIPOC Critics Lab, a new initiative hosted at the John F. Kennedy Center for the Performing Arts that uplifts voices long left out of arts criticism, theater critic Jose Solís looks backwards on the culture that has silenced too many writers, and forwards toward a more inclusive paradigm.

To interpolate an old line about sports, fans hear with their hearts. Hopper is a critic who, like all of us, is originally a fan, and that delineating is often hazy and, in the space of this book, self-contradictory—not in the way that happens to us all, having an opinion about a thing and then later changing our minds, but in terms of values.

Encounters with the Unknown in a Catalogue Raisonné Project

How can we observe Motherwell’s reworking of his canvases (and titles) through their exhibition history? How did critics understand his early work, before signifiers like “Irascible,” “New York School,” and “Abstract Expressionism” cohered around Motherwell and his contemporaries? My colleagues and I were enmeshed in these questions (and more, so many more questions), as we delved into the pleasures (and frustrations) of research.