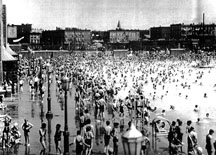 With its light blue, peeling paint, remnants of broken glass bottles, cracked basin floor, and graffiti, the abandoned, 50,000 sq. ft. McCarren Pool is an unlikely space for dance. But Williamsburg-based site-specific choreographer Noémie Lafrance has chosen just this site for her latest work, Agora. A piece for 30 dancers, Agora (marketplace in Greek) employs movement to draw attention to the vastness of the space. Built as part of the WPA in 1936 and designed to accommodate 6,800 people, McCarren Pool closed in 1983, and it is Lafrance’s hopes that her site-specific work will revitalize this public space. After a recent rehearsal at the pool, Rail Dance Editor Vanessa Manko sat down with Lafrance to discuss Agora and her plans for the future of McCarren Pool.

Vanessa Manko (Rail): How did you discover McCarren Pool and what made you drawn to the space?

Noémie Lafrance: I discovered it in 1996 just wandering around and being curious about the spaces in the neighborhood. I thought it was very beautiful. I don’t think I understood at that time what it really represented in terms of it being a WPA project. I didn’t know that it was a pool for 6,800 people. I thought it was extremely sexy and interesting because a pool is a representation of recreation, and pleasure, and people having fun. And, of course, only in New York would you find such a massive, public space. I also like it aesthetically—the effect it has on how you look at people in such a large space and how you look at what’s closest to you and what’s furthest from you, and how that distance makes narrative stories. When you have six or seven people running around, you start seeing how much interaction there is. There’s a multiplicity of things happening and the audience makes meanings—what’s interesting to you might not necessarily be interesting to the person next to you. So it’s multiplicity on the same stage, I think, that’s very interesting about this space.

Rail: In Agora the vast pool is meant to invoke Agoraphobia. Can you talk about this a little?

Lafrance: Agoraphobia was the theme in the beginning, but I’m also talking more about the meaning of public space. Such a large space especially, being empty is scary. It’s different then when it’s filled with water; it’s more romantic and peaceful. The agoraphobia is inherent to the space. The first thing that you feel here is “wow, this space is too big for me and I don’t know if I can handle it.” Agoraphobia became serious at the beginning of the century. It was an urban-induced disease. People with agoraphobia are scared of tall buildings or scared of large spaces, scared of leaving home. But the signification of Agoraphobia is so large. It also includes fear of the public, fear of people, fear of your own self. So all these things are filtering into the piece, but, in the end, I think I want it to be a happier representation of public space—the multiplicity of the public space and how it can serve the community by being a place for discussion and exploration. It’s really when you collaborate with other people that you get other ideas.

Rail: So Agora is a celebration of public space as well, correct?

Lafrance: Exactly. That’s what it became. I discover the piece as I’m working and really collaborate with the space; this is something that I’m discovering everyday.

Rail: So the space really factors into all of your works and into the actual choreography.

Lafrance: Exactly. For instance, in Descent, there were a lot of other things I could’ve done with the stairwell, but it’s a lot of what you don’t say as much as what you say. It’s the same thing when I choose to use a space in a certain way. In Descent, I chose not to do a lot of things on the landings of the stairs, but to use the center, and to exploit that and use it from below and above. Here, in Agora, you’re going to get the feeling that the dancers are never getting out of here. The only time they get out is when they sit on the edge of the pool with the audience. So there’s this sense of infinity and sense of continuity that gives the space another meaning in Agora. I think people will be fascinated by just entering this space. Just to give them this space is an extraordinary thing.

Lafrance: I think I’m going to work on this piece for many years. I’m leaving a lot to chance in Agora. I’m composing, let’s say, different instruments. There’s going to be a structure that’s very clear and dominant, but then there will be substructures inside of that. A duet will be happening in one area and something else will happen in another. So there will be synchronized cells. Meanwhile, there might a whole group doing a whole other thing, but you’ll make a relation in your head and the dancers might make these choices too. I’m actually going to train them to have those skills. I think I can teach them and they will understand the concept of working in the space and doing multiple choice with the movement. The dancers will be sitting in the audience and they’ll be looking and they’ll be able to jump in, so at some point they’ll be able to rest and say that’s interesting over there I want to go do that and then they’ll go there. Maybe I need more than 30 dancers? [Laughs.]

Rail: How do you think performance, specifically site-specific work, can add to a community and/or public space?

Lafrance: I think that site-specific work has a huge impact on improving the lives of people and the community because it allows for people to look at space in a different way, to understand the city that they live in, and help them to create other meanings, and to see other qualities that they haven’t noticed before. And people who are not interested in architecture may be able to discover the beauty of architecture, and for people not interested in dance, to discover dance and movement being something that communicates to them, and that they can come to a space because they’re curious and adventurous, and because they want to see what’s going on.

Lafrance: Well, the aesthetic of fear is very engaging, and I like to play with danger. My work always places me and the audience and the dancers on a line of what’s possible and what’s impossible, and this project is still, basically, impossible—until we actually do it. I’m also interested in the element of suspense. There’s a kind of excitement and mystery. When you come here, you have to expect that your heart is going to be beating fast, especially at night. When you come at night you get that feeling. It feels like you’re far away from the world, and it’s grandiose and scary.

Rail: Can you talk a bit about the plans for the future of McCarren Pool?

Lafrance: I’m envisioning a performance venue that’s not like the other performance venues that we have where you’re expected to do something on a stage. The program supports the works of a range of different artists from large scale projects to smaller works. We’re going to ask potential artists, “How do you want to use the space? How do you see the audience being integrated into the work? How do you want to transform the space? Where do you want the audience to be? Do you want them to follow you or sit?” So we’re going to weave that into the process and the artists will be able to rehearse here and build whatever they need to build that’s integrated into the space. Maybe you want to take a piece of fabric and attach it across the pool, or build a bridge. So bringing in this way of thinking for performance in a very large space that’s sort of neutral allows for a range of possibilities—there’s endless possibilities.

Maltz’s project is to make something but still deny the fruit of his efforts a description; his process is also calibrated to reject bourgeois definitions of art—he stacks, piles, and arranges objects but refuses to force them into a state of permanent association.