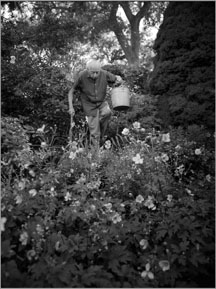 Stanley Kunitz, poet, editor, teacher, activist, leader, and collaborator approaches his one-hundredth year—Farnoosh Fathi speaks with him and his literary assistant, poet Genine Lentine, about his life-long devotion to and extraordinary achievements in the world of poetry.

Farnoosh Fathi (Rail): Genine mentioned to me a beautiful and intriguing remark that you made in light of the recent “Stanley’s Century” tribute given by many of your closest poet and artist friends; in the presence of that audience, with all the caring in that room, “you felt that you had inherited a better world than you had thought.”

Stanley Kunitz: Yes, I thought that tribute was a demonstration of a bond that is part of the world I’ve inherited. There is a bond and it is really very important to recognize it and to feel the same way about other poets. I think that it is a different world than the one I grew up in—there was a sense when I was growing up that poetry belonged to another generation and that we were lucky to have any encouragement at all.

Genine Lentine: You must have felt a lot of encouragement and sharing in that room, not only with the ten poets who spoke, but with the thousand people who attended; so that sense of intense community must be a really different experience from what you described about your early days when there were no poetry readings—today they’re so abundant…

Rail: And you’ve not only seen but helped catalyze and foster that change—

SK: I hope so. I think poetry itself has changed so much since my first adventures in that direction.

Rail: You’ve said somewhere, Stanley, that a poet who is still writing at the age of sixty has a tremendous will to survive—what is the relationship in your mind between survival and the writing of poetry?

SK: Well I think it’s very important to find one’s self at an early age and to know that this is what you want to do, that this is a part of the dedication of your life. I began writing very young and it was not a casual thing. It changes everything as you grow and start sending out your poems and getting a feeling that you belong to a brotherhood and sisterhood—it is very important you know that.

GL: Is there anything in the act of writing poems itself that has helped you to survive?

SK: Well, you feel that poetry is more than a job or any kind of job that I can think of—it’s a kind of life and it’s part of one’s claim on life—and to recognize it early is to really become what one dreams of becoming. But you don’t really invent your dedication or your talent—it doesn’t just suddenly seize you by the throat. It’s part of your inheritance…My commitment was not a simple exercise. Even when I was ten years old I promised myself that I would make every effort to observe and to read; it was a kind of dedication. I felt always that I must never betray it, and it is something I have continued to do and experiment with. It was very important to read the poets of that time and become familiar with them. Also, I felt very encouraged by my friends and teachers; I was lucky in my teachers; there was never a feeling that I wasn’t entitled to a kind of encouragement—I had it and I used it.

SK: When I read that poem I feel I am still mindful of that experience as one of the major events of my childhood. I feel that if I had not written the poem I would write it today or at least try to write it. Some experiences are at the core of one’s existence and it is terribly important to catch them on the wing, not to let them fly past you and be forgotten.

GL: It’s a balance though because you don’t want to get stagnated either. Do you think that event mobilized you? I’ve heard you say that her slap motivated you to defend death as a positive force—that you had to come up with a way to think about death in a way that had some kind of positive force—because you were born into such grief, into such a huge sense of loss—how that slap forced you to rethink death.

SK: That’s true, and don’t forget that my mother was not in the habit of slapping me, but that she was so hurt herself that she responded that way.

Rail: There’s a moment from another poem, “Raccoon Journal” which I couldn’t help but be curious to ask about: a wish “to be like Orpheus, who could talk with animals in their own language—”

Rail: Yes, it seems to speak to your powerful and intimate relationship with the natural world.

Rail: You said once that if you could live forever you would translate poems into every language? What would make it worth it?

SK: All those poems!

GL: Poems being able to travel.

SK: Well I can’t think of wanting to do anything in place of writing poems. The greatest reward is in the very act of writing the poem. I can’t imagine doing anything else that would mean as much to me, even gardening.

GL: Does that reward have something to do with being awake and alive—would you say that while writing a poem you are in a one-to-one relationship with time?

SK: Yes, but also, writing a poem identifies you with the poets of the past and there’s a sense of brotherhood and sisterhood and there is no substitute for this.

Rail: And it also seems the reward is that it is a real challenge, that you are confronting and digging and really going, as you’ve said it, “beyond the day” into the really the deepest part of yourself—so the reward is also being able to do that.

GL: Do you physically feel better when you are writing a poem?

SK: It isn’t so much physically; it’s something deeper than that. But yes, in simple language—yes.

GL: I ask because you have talked about how even if you have been coughing a lot or feeling horrible, you start to read and your voice is suddenly really clear.

SK: Yes that’s true; it is mysterious too that even at almost one hundred, one feels recreated in the act of writing a poem. It’s like claiming whatever out of your life seems worth preserving.

Rail: I’m very thankful; this has been a real honor, to speak with you. There’s such a widely shared sense of deep admiration for what you have achieved; it seems as though you set out to achieve a kind of—what you’ve described as—wholeness, in your work and in your life, something that you thought was rare in the world of poetry; that there were few poets, like, taking an example you’ve given, Pasternak, who seemed to excel in their humanity in their work and in their life. It seems clear that you are, and will continue to be deeply appreciated as, one of those exemplary poets.

Stanley Kunitz’s new book The Wild Braid: A Poet Reflects on a Century in the Garden, with Genine Lentine, photographs by Marnie Crawford Samuelson was just released by W.W. Norton. An exhibition of photographs from the book is on exhibit at Poets House (www.poetshouse.org) 72 Spring Street through June 25.

Farnoosh Fathi is the author of Great Guns (Canarium, 2013), editor of Joan Murray: Drafts, Fragments, and Poems (NYRB Poets, 2018) and founder of the Young Artists Language and Devotion Alliance (YALDA).

Born in Brooklyn to a relatively poor family, Harold Rosenberg spent a couple of years at City College and briefly attended law school. In the 1930s he wrote poetry and worked as an editor. Then during World War Two, because he had an injured leg, and wasn’t drafted, Rosenberg lived in Washington, DC and worked for the Office of War Information.