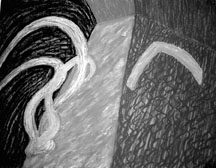 On the heels of Raising the Bar, the critically acclaimed painting show that paired Thornton Willis and James Little, Vered Lieb and Richard Timperio have co-curated this show and selected some of New York’s most enduring, though perhaps lesser known, abstract painters. Willis and Little both participated in Barbara Rose’s American Painting: The Eighties exhibit, which though flawed, refocused critical and artistic attention on a phase of post-minimal, post-Greenbergian abstraction that is still the impetus for a large sector of current activity.

Ray Parker had two loves in life, painting and jazz, and there are shared characteristics between the rhythms, phrasing, intervals and spontaneous riffing of great jazz and the works of more than a couple of the represented artists. In his small paintings, Parker lays in rounded blocks of color, establishing a chromatic atmosphere and notation of rhythm. Smaller patches and drawn lines twist, flutter and punctuate the larger shapes like a saxophone solo. Shades of brown, gray, and toned-down blues keep the palette from overt sweetness.

Tom Evans contributes black and sepia ink drawings with veils of modulated washes. Though abstract, there remains an echo of figures or landscape, and the delicacy of these works recall the richness of Rembrandt’s simple sketches, or the initial excursions of the early cubists. The color works feature ragged organic forms with intense color edges that fade towards the center overcast with a unifying web of gestural marks that bind the compositions.

Heavy leaves of paper, laminated to metal sheets, and floated a couple of inches off the gallery wall form the unique method of presentation chosen for the drawings of Brian Henderson. Broad regular strokes of black oil stick are emphatically drawn; the straights, curves, and loops seem calligraphic, akin to the brash attack of a graffiti tag. Vertical smudging and the addition of squibs of brilliant color lend a feeling of gravity and velocity.

Bracketing chronologically the time frame of the developments represented within this show are two small pieces by Dan Christensen. The first is a signature sprayed spiral from 1967. The lightness of the pigment and the apparent effort lessness of execution reflect the sunny side of the late sixties. The other, a work from 2003, is also a color spiral although the paint is not sprayed, but squirted. A plane of deep cobalt blue is the base upon which lines of white, ochre, magenta and orange circulate. While the earlier piece deals in the vaporous transparent nature of sprayed color, the later demonstrates the material state of opaque hues described as body color. Together they are an interesting parallel comparison from over thirty years of development.

Cecily Kahn may have chosen the most demanding and challenging position of any of these artists. These works are stuffed to bulging with historical references and technical means, representing nearly a century in the evolution of abstract painting. They include: skewed cubistic fields, surrealistic biomorphic shapes, ab-ex scribbles, drips and splatters, color field staining, decoratively patterned areas and obsessively drawn or textured sections. Ironically, by combining these various devices and the historical connotations, Kahn in the best works, achieves a certain timelessness, which is after all, a stated aspiration of many abstractionists.

Whereas Kahn’s interests are in retaining devices, James Little is intent on eliminating all but color, shape and edge. Like a super-charged dragster, these paintings are stripped down to the essentials, and like a music score they read horizontally. The preferred shapes of diagonal and vertical stripes, slender triangles, and sliced rectangles extend from top to bottom. Slivers of intense hue slash into fields of contrasting shade, setting off visual vibrations sharp as a razor.

The realm of ultra-high keyed florescent and phosphorescent colors is the area of current research for Margrit Lewczuk. Many recent pieces approach symmetry and contain cruciform elements as well as freehand grids. With the addition of glow-in-the-dark pigments, though Lewczuk claims no spiritual intent, one can’t ignore the iconographical nature of these works, and the implied transcendental spiritual desire these images engender.

In “Warf” (2005) a block of wavy red strokes lets enough ground color through to distinguish it from an abutting section of the same red laid down in closely knit parallel dashes. Joan Thorne’s painterly sensibility can’t be ignored. These oil stick paintings bring a tropical flavor with them and their vine like forms and geometric grounds allow Thorne to create pictures from a sophisticated vocabulary of mark making that articulates form through the development of both a coloristic and textural space.

There is somehow rightness to the geometric divisions in a Thornton Willis painting. The rectangles and triangles that divide them find an awkward balance that expresses a hard won struggle. The linear divisions have, in the more recent pieces, become blunt bold beams that extend color structure and shift from mere edge to self contained slender shapes. Willis’ use of analogues tints and contrasting hues lends an elegant and unequivocal directness to the compositions.

Finally, Chris Martin, a long time resident and vital member of the Williamsburg artist’s community, is well represented. Though having a strong affinity both philosophically and artistically with what might be called the “third generation New York School,” Martin overlays this paradigm with his own eccentric spiritual motifs. In a watercolor of matching squares, composed of numbered trapezoids, the observer is encouraged to study the progressions and compare the different placements and the relationships between forms. In another piece, three green balls branch up through a Fibonacci progression and result in eleven, the airbrushed red branch lines appear to glow with radiant energy.

Despite the recent hype of the “triumph of figurative painting,” this diverse group of artists provides examples of accomplished works representing some of today’s most vital directions in contemporary abstraction.

Last fall I imprudently ran up my company Amex to buy materials for a body of sculpture I wanted to make. So begins Darren Bader’s latest foray into the funny, sexy, sad lives of objects: a compendium of wall-mounted and floor-balanced assemblages—knickknacks, tchotchkes, doo-dads, detritus, debris, and crap—all of which exclaim a certain thingness, plus a sentimental value somewhere between an Etsy-trained AI and at least 10,000 Midwestern monkeys banging out Hamlet.