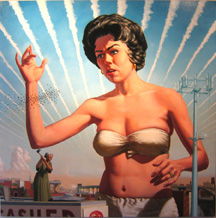 How does an artist who has an abiding respect for a grand ancient tradition and a desire to remain completely contemporary, meld these two opposing urges? John Jacobsmeyer utilizes his abundant skills to perform a provocative pastiche transposing the classic techniques of under-painting and glazing to the project of depicting sci-fi B-movie and TV characters from the fifties and sixties. Though trying to depict space aliens from the original StarTrek, or the Fifty Foot Woman in a style reminiscent of the Late Renaissance might seem incongruous, resonance does appear. The gallery press release mentions Jacobsmeyer’s interest in the styles of the Italian Mannerists, particularly Bronzino and Permigianino, and it seems appropriate that this style be used to picture what might be considered American cinema’s own version of Mannerism, the Science Fiction Thriller. The element that ties these Italian masters to the likes of the Incredible Hulk is the double-dutch of kitsch and the grotesque. As Robert Storr observed in regards to the grotesque, nature cannot be grotesque. A form must undergo a type of abstraction, an exaggeration of its structure or shapes to become grotesque. As the late Renaissance left artists with a desire to extend the pictorial dynamics they had devised beyond naturalism, the science fiction writers and designers likewise based their creations on extrapolations of scientific theories.

“Vaterhaus” (2005) pictures a female space warrior in futuristic gleaming armor. The classic half-length portrait format shows the figure in three-quarter profile with hands extended in front. Above the hands, a pair of white arrows depicts movement, a reference to American Sign Language. This amplification of classic hand gestures—used extensively since the beginnings of figurative art—into the embodied language of the deaf, is a device Jocobsmeyer uses in many paintings, with mixed results. In “Howl: Lou Ferrigno’s Soliloquy in Central Park” (2005), we see the wide eyed “Hulkster” with a Beatle haircut, his pumped arms motioning, trying to express some unstated point. Yellow curved arrows above the hands contain the beginning text of Alan Ginsberg’s “Howl” written in reverse. However clever or facile these kinds of painterly devices are, unless carried out to some more absurd extreme, they seem a distraction from the overall thrust of the paintings, as if to overcompensate for some perceived lack of conceptual content that the paintings, in their own right, don’t really call for.

Also presented are an ongoing series of wood engravings illustrating James Dickey’s poem “The Sheep Child.” This project involves cross section cuts from a single tree, and the wood slices are displayed on narrow shelves along with the prints. Of the dozens of circular blocks, some surrounded with worm clamps I assume to forestall splitting, only about a third have yet received their images. This series, with its fine detail and recognizable likenesses of Dr. Spock and others, demonstrates Jacobsmeyer’s considerable recognition as a printmaker, and his commitment to reinvigorating this technique

The centerpiece of Superhero Lonely is the eight-foot square painting “Invasion.”  Based on the 1950’s movie The Attack of the Fifty Foot Woman, Jacobsmeyer has added a sense of narrative and action that the portrait pieces don’t have. A giant woman (more like three hundred feet tall) looms over a sunny Southern Californian urban landscape. Looking like a young Elisabeth Taylor, she is clothed in white bra and panties, and wearing a wedding ring (which has somehow have managed to accommodate the tremendous growth of her body). A flock of pigeons flutters around her raised right hand. In the foreground on the roof of an industrial building, an old lady is ready, with upraised ax, to chop a small flying saucer, a reference to an episode of The Outer Limits or The Twilight Zone.  Vapor trails form an icon-like burst in the sky behind her massive head. Though unclear, these exotic threads of narrative and the inclusion of other players in this drama, develop content and an implied action that his other paintings lack, and signal a potentially rich direction for development.

Dear Unformed Desire… I started this project thinking that I was going to write a book review of Unformed Desire, newly out by the Swiss artist Flurin Bisig. But the more I work on it, contemplating the book, its materials, his talks, our conversations, and so forth, I start to realize that I am actually writing a love letter.