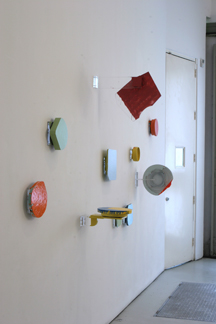 Born in 1964, in Winchester, England and currently living in Brooklyn, John Beech is known for his innovative transformations of seemingly mundane industrial objects into extraordinary epitomes of mysterious beauty. Be it three-dimensional containers, pieces of scrap wood, or photographic images of junkyard dumpsters, Beech’s sources for inspiration are as eclectic as they are drawn from the familiar, bestowing the seemingly bland with exotic charm.

Comprising works from the past three years, Beech’s current exhibition features examples of the artist’s so-called “Dumpster Drawings” as well as large-scale sculptures. While rooted in the Duchampian question of the distinction between art and everyday life, Beech’s work adds a strong sense of theatricality, which is initiated by the artist’s careful alteration and presentation of each object. Leading into the main gallery are ten “Rotating Paintings,” all differently shaped Plexiglas shards coated with bright enamel. Though reminiscent of standard geometric shapes, each work seems slightly “off,” and hence, imperfect circles and uneven rectangles with rounded edges dominate the scene. Installing these paintings in unusual angles or even perpendicular to the wall, Beech provides them with a dramatic aura that raises their otherwise simplistic characteristics to a new level. Viewed together and from different perspectives, they become part of an elaborate re-examination of the basic relationships between color and form, a reconsideration of the boundaries between painting and sculpture.

The main gallery features two of the artist’s “Container Sculptures”, both counterbalancing each other, as one is vertical, the other horizontal in nature. Stripped of its former function, the plywood enclosure “Blue Container” is shown with one of its side panels removed. While allowing a thorough glimpse into its interior life, the tall sculpture is partially coated with bright blue enamel that looks like swimming-pool insulation plastic. Lush drips have seeped through the bottom plane and hardened on the corner edges, defying a false image of perfection and generating an overall sense of autonomy. “Low Container,” a rectangular structure, measuring no more than nine inches in height, shares this quality. Painted in deep sunset orange, the work spreads over the floor, encouraging the viewer to examine the now slick angles and original indentations from above. One would not be able to guess this alien creature’s former function.

Framing these centered objects, a series of “Dumpster Drawings” dominate the gallery walls, such as the monumental “Large Double Dumpster Drawing (Silver/Bonn).” The work features two black-and-white photographs of the same image on whose subject only the title offers any information: a dumpster as seen in Bonn, Germany. However, covered by metallic silver paint, the former host of trash has been made invisible and its three-dimensional likeness has been replaced with the flattened shape of its authentic volume. Whereas Warhol colored his silkscreen images and personas without disguising their identity (in fact he relied on their easily recognizable likeness), Beech removes everything but the object’s outline and setting. Despite this difference, it is arguable that in both oeuvres the creation of adaptable ghost-images and blank screens onto which the viewer can project his imagination is essential. Abstraction becomes both the artist’s signature and a means to elevate the altered image to an object of its own and of independent value, or better, to a work of art.