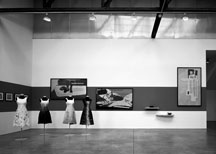 Recent visitors to the Andrea Rosen Gallery may have sensed an uncanny edge in the air. Although everything was very still, there was an underlying flurry—a calm sea as it were—that pervaded the space. The cause was Andrea Zittel, and the problem was her latest show, A-Z Advanced Technologies, a striking installation of objects and ideas that ricocheted with import and exploration, and showcased some of the results of her latest project/compound—A to Z West—her new home and studio in the Mojave Desert of California.

A-Z Advanced Technologies represent the new creative strategies Zittel designed in response to the oppressive natural conditions of the desert, and it stands for modes of making art that avoid high overhead and strenuous physical toll. The striking spell the work cast came from more than the demonstration of the artist’s prowess across a wide variety of disciplines, including clothing design; crocheting; furniture making; painting; printmaking; textile design; and writing. It came also from the presentation of a range of objects that cascaded from abstraction to representation, and because the installation, whose structure was akin to a sleek design salesroom, managed to dance around the line of art and design and land full-square in both.

Because she is interested in functionality, self-sufficiency, systems, and order, Zittel’s practice has always pushed and pulled at art through the lens of a designer. Bauhaus is the natural touchstone to which comparative assessments and formal precedents are frequently made, but there are important differences. Where the Bauhaus sought out a pseudo-utopian form of co-joining applied and fine arts, and revolved around a school that promoted specialization in specific design genres, Zittel approaches the applied/fine art divide through her variegated practice, and presents her modes of living as an artwork in itself.

The resulting work is inherently personal, idiosyncratic, and quirky. The “fine-art” appears around the edges: in the suite of prints documenting Raugh furniture, their forms as yet un-solidified, slurring across the page; in the bowl she professes to love in the form of a watercolor testimonial; in the delicate crochet constellations that seem to stand in for the desert’s expansive celestial dome. The applied work—the structures, the furniture, the clothing—is the core of her practice, and it seems no small trick that her garments take the shape of a smock or apron, sutured together with a large kilt pin. It is the costume of makers—mothers, potters, cooks, welders—and placed in the gallery it reflects Zittel in action. In fact, active verbs played a big role in A-Z Technologies, for the aura of the lingering presence of Zittel’s own hand lent a haptic pull to the work, and any with a slight inclination towards craft must have surely felt inspired to go home and get going.

Zittel’s projects indulge her desire to make things, and though she presents a lot of different finished items, the exhibition buzzed with the resonant promise of that which hadn’t yet been made. There was a pull and energy, from one idea to the next, and the exhibition charged forward, carried along by the strong cadence that is Zittel the instigator. In one painting she locates the viewer behind the steering wheel, cruising through the canon lands and towards the promise of the next project.

There is a conscious identification in this newer work to align with an earlier generation of American western bound artists, among them, Walter De Maria, Michael Heizer, Nancy Holt, and Robert Smithson; indeed, the very concurrence of the Rosen exhibition and Zittel’s participation/project in the summer Artforum reeks of nostalgia. But while Zittel’s projects couldn’t be more different than her predecessors, there is a resonance with her desire to consider the scale, scope, and shape of the natural world, and to create a practice that can operate outside the main frame of the gallery. The recent acclaim of the Robert Smithson Retrospective, the thousands flocking to see the newly reemerged Spiral Jetty and De Maria’s Lightning Field, are testament to the importance of projects outside of center.

Zittel’s following among her fellow artists is evidence of her magnetism as a leader. At A-Z West, she has continued the communal feeling nurtured originally at A-Z East in Williamsburg (with its Thursday night A-Z Personal Presentation Room open-house/cocktail party) by inviting other artists to come west and build High Desert Test Sites, experimental art sites in the vicinity of A-Z West (www.zittel.org and www.highdeserttestsites.com). Their mission—to counter the standard criteria of the art world—is neither new nor revolutionary, but this doesn’t make it any less interesting or relevant. As a founder of the new western guard, Zittel is a bellwether for her generation, and it is inspiring to imagine what might come next.

I write about the edge in my own painting as a way of situating myself in the world and figuring out how to receive it.

In 2009 the Museum of Modern Art made a major announcement concerning its displays that was dutifully reported by the New York Times: the chief curator of painting and sculpture, Ann Temkin, had decided to remove the frames from the museum’s collection of Abstract Expressionist paintings, thus “freeing” the paintings from the “domestication” of the gallery space.