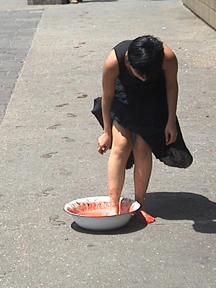 With Always a Little Further, curator Rosa Martínez has taken Venice’s impossibly vast brick-and-limestone Arsenale—the 500-year-old shipyard serving as an adjunct venue for the 51st Biennale—and filled it with a bristling array of audacious, turbulent and visionary art. Martínez’s unlikely sources of inspiration are Corto Maltese, a comic-strip adventurer created by the Venetian artist and writer Hugo Pratt (1927–1995), and Samuel Beckett, who in his Three Dialogues with Georges Duthuit invoked an art that is “weary of puny exploits … of doing a little better the same old thing, of going further along a dreary road.” The exhibition walks a delicate line between “enthusiasm and exhaustion”—as Martínez states in her notes—assimilating the dauntless spirit of Pratt’s globetrotting treasure-hunter and the hemmed-in, fatalistic world of Beckettian archetypes.

In less assured hands, the curator’s deliberately nonspecific and contradictory criteria might have led to a discordant, unfocused mess. But Martínez displays a finely honed aesthetic and a flawless knack for pacing, space, and scale. The monumentally proportioned artworks that comprise most of the exhibition seem to be grouped according to a gut-level sensibility, rather than a predetermined scheme, which places them in harmony with the surrounding space and each other.

Household names are in short supply, leaving fertile ground for discoveries like the proto-neo-expressionist paintings by the recently deceased Turkish artist Semiha Berksoy, or the violet and golden onion skins strewn across a white marble slab by Italy’s Bruna Esposito. But film and video, often in combination with performance and installation, rule the day. The most trenchant works, by and large, come from developing countries, thick with politics yet tempered by poetic indirection.

In her film, “Vapor,” Berni Searle (South Africa) follows a barefoot walk among rows of steaming metal caldrons over flaming open pits—a hellish nighttime tableau with resonances of ritualistic punishment and repentance. Rich twilight colors infuse “Turn On” by Adrian Paci (Albania), whose opening close-ups of roughhewn men in scruffy caps feel like an homage to Italian neorealist cinema. But the film soon turns elusively metaphorical as the men rev up ear-splitting generators attached to large, dangling light bulbs. As the lights flicker on, the men hold the bulbs aloft like so many beacons against the gathering darkness.

A two-channel projection, “Ramallah / New York” by Emily Jacir (Palestine), presents side-by-side fixed-camera views of hair salons, convenience stores, delis, and other businesses in those two cities. The pairings give no hint of the troubles beleaguering Ramallah; in fact it’s sometimes difficult to tell in which city a particular office or shop happens to be. The very ordinariness of these moments of calm imparts a flatfooted poignancy to the scene, stirring in the viewer a melancholy longing for peace. And in “Under Discussion,” a video by Jennifer Allora and Guillermo Calzadilla (USA and Cuba, respectively), a lone boatman pilots an overturned wooden table through the waters around the Puerto Rican island of Vieques, its shoreline pockmarked by American bombs and littered with undetonated shells, charred tanks, and smashed planes.

The work of Regina José Galindo, a Guatemalan performance artist, would be easy to miss—three mute videos and a large pale gray cube—easy, that is, if not for “Himenoplastia.” An unflinching video document of a hymenoplasty the artist had performed on herself, it provides the exhibition with its most riveting can’t look/can’t look away moment. Shot in extreme close-up, we’re spared no detail: the anesthetic syringes, the cutting, the blood—geysers of it—and then the sutures. As you watch, agog, you can’t help but contemplate the power of the male fantasy of possessing a virgin, and the pressures that some cultures exert on women to fulfill that fantasy. But if Galindo succeeds in demonstrating the gruesome barbarity of the patriarchal order, isn’t she also subverting it by underscoring its baseless illusions? And wouldn’t she, as the keeper of secret knowledge (that she’s not really a virgin), hold the true power?

Galindo, rather than playing the victim, assumes the victim’s pain—a feat of steely strength and superhuman resolve. In “Skin,” she is seen shaving every last bit of hair off her body, including her eyebrows, and then walking naked through crowds of casual strollers, none of whom will look at her. Hers is a blunt, simple and powerful indictment of collective willful blindness—the kind that makes brutal dictatorships possible.

Even more devastating is “Who can erase the traces?” The artist, stepping into a basin of blood, leaves a trail of bloody footprints all the way to Guatemala’s Corte de Constitucionalidad. When she reaches the policemen guarding the building, there is a stomach-churning moment of suspense as this tiny, silent, barefoot woman faces down the smirking, puzzled guards, then sets her bloody basin on the sidewalk before them and strides away.

The above-mentioned gray cube is actually a performance space for “(  ) hits.” During the first five days of the Biennale, Galindo crawled inside the cube and whipped herself 256 times—once for each woman systematically murdered in Guatemala from January 2005 until the day of the performance—and wept. My initial reaction was to question the artist’s sanity. But what constitutes madness in the world we live in? Anyone with an ounce of sensitivity must experience a daily wave of anguish over our own government’s actions; if anything, living in Guatemala is ten times worse. Galindo’s self-flagellation feels like the logical conclusion of countless assaults on her spiritual and moral integrity by a corrupt and brutish power structure.

Galindo won the Golden Lion for a young artist. But after witnessing works this searing and otherworldly, you have to wonder, what is she going to do with it?

Eleanor Heartney speaks with the artist Enrique Martínez Celaya about his two concurrent exhibitions, the beauty of physics and philosophy, and why all artists should aspire to be prophets.