“The United States is losing the war of images,” U.S. Senator Chuck Hegel was recently quoted as saying in the New York Times. In his recent essay “Sports,” artist Seth Price anticipated the senator’s comment, writing, “The real battle is with images.” Images do a public identity make, not only in the cases of governments flailing for credibility, but also in the realm of commerce. The explosion of the market popularity of iPod and Vitamin Water over the past few years provides an obvious example. Since iPod has been proven to be a product of dubious manufacturing quality (witness a recent court ruling against Apple for the product’s faulty batteries) and Vitamin Water isn’t appreciably different from several competitors (except that Paris Hilton LOVES it!!!), why is this so? To revive the persistently relevant Andre Agassi quote, “Image is everything.” Both companies offer the promise of a healthy, vital, and sexy lifestyle—nothing new there—but their ads’ light, warm color schemes and striking graphic appeal are the seductive hook.

Several recent shows by New York City-based artists have taken as their subject the symbiotic relationship between images and commerce. Whether this work—which often comes across as static in the pants of capitalism—allegorizes the ludicrously inflated market for young contemporary artists like themselves is debatable. It seems that a piece like Mike Bouchet’s “The New York Dirty Room” (2005), a large room at the Lower East Side gallery Maccarone, Inc. filled with 50,000 pounds of topsoil bought at Home Depot, is an attempt at something timelessly memorable (the intentionally pathetic cousin of Walter de Maria’s “New York Earth Room”) yet totally uncollectable. Ditto for the precariously cracked sheets of glass Price showed last year at Reena Spaulings Fine Art. But aside from gestures such as these, which may or may not represent mocking smirks in the faces of collectors, much of the recent practice of a small group of New York artists apes corporate behavior. They’re innovating and selling products in a commercial marketplace; printing promotional labels; and arbitrarily asserting authority in hazy zones of ownership or authorship. 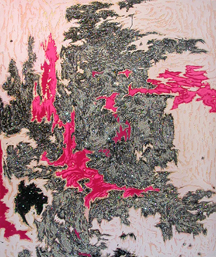 “The New York Dirty Room” is the featured production of Bouchet’s current show at Maccarone (on view through August); his sculptures and canvases on the gallery’s second and third levels are the advertisements, the white noise. “Top Cruise” is an installation of 1,000 (although many have yet to arrive) busts of Tom Cruise (although it doesn’t look much like him) strewn about the gallery floor, several Cruiseheads still wrapped in packing foam. The press release reads like the back of a baseball card, mostly stats: the installation occupies 600 square feet of floor space and its total weight is 3,550 lbs, each head is 13.18” tall, 3,520 pounds of clay and 30 liters of paint went into the production of “Top Cruise” when it was outsourced by the artist to a factory in Mexico. On Maccarone’s top floor is “Long and Skinny,” which Bouchet classifies as “an interior cola sculpture.” Its components: a fish tank containing gently bubbling diet cola; a stack of canvases leaning against a wall (the only visible one pictures a Nutrition Facts label—0% daily value of everything); and an installation containing several canvases stained with Bouchet’s cola to create images in the shape of bottle caps. Logos, slogans, and taglines—the Virgin logo, half-nonsense texts like DIET TWIN DOUBLE COLA ING or HARD QUENCH DIET—appear within said caps. To be in the presence of “Long and Skinny” is akin to wandering into a Chinatown manufacturing storefront, the premises overflowing with shelved ideas, surplus goods, printing errors, and extra commerce, the black sheep of the market.

What’s not immediately obvious without a little research is that this is Bouchet’s cola; he calls it My Cola Light. He invented the recipe, first using the concept for his show at Galerie Michael Neff in Frankfurt. From his project proposal: “I want to produce my own diet cola. I will make my own diet cola formula, and then I would like to produce and bottle enough cola to fill a sea shipping container. I would like to bottle the cola in large bottles. They will be printed with labeling that I will design. The sea container will also be painted like the cola logo. I will leave the sea container in the exhibition space for half the time of the show, and then ship the sea container to a destination in China. Once My Cola Light reaches China, it will be available for people there to drink.” For the 2004 project Cape Denim Colombia, Bouchet designed jeans to be produced by factory workers in Colombia. When completed, Bouchet threw the jeans out of an aircraft as a re-gift of sorts to the region that produced them. These actions transcend commentary on the politics of image control, corporate branding, and economic globalization. They locate Bouchet within the producer-consumer matrix of the “real” world—not just the art world—as a producer of images and products, a dependent of outsourcing and a branded public image.

Seth Price is perhaps the artist whose work most shrewdly performs the identity of artist as amateur corporation. His output is exceedingly polymorphous—a German-style romantic fairy tale, close-up photos of bread displayed on empty CD cases, vacuum-packed bomber jackets set in relief against shiny slabs of polystyrene, various files downloaded from the internet and repackaged for consumption, the aforementioned cracked glass, and a slew of razor-sharp and highly quotable essays on topics ranging from image philosophy to the early 1990s musical movement New Jack Swing. Price cultivates ambiguity. His work is defies categorization, and, often, interpretation. What is clear, however, is his willingness to place himself within the capitalist superstructure of the “real” world, a gesture similar to Bouchet’s. Yet while Bouchet interfaces within a global system of producers and laborers to fabricate products that often have unclear or negligent markets, Price creates saleable commodities on his own by using the Internet.

Price writes, “An art grounded in distributed media can be seen as a political art and an art of communicative action, not least because it is a reaction to the fact that the merging of art and life has been effected most successfully by the consciousness industry.” Much of Price’s own distributed media takes the form of easily saleable, inexpensively produced products, an aspect of his work he flaunted by administering a merch table selling an inverted DVD download of the Nicholas Berg beheading at his Reena Spaulings show. “Early Video Game Soundtracks” is probably Price’s best-known work up to this point, because of its penetration into the marketplace. To execute it, he sought and downloaded the primitive, looped bleeps of video game soundtracks from 1982-87, burned them to a CD, and sold copies of the pirated product, later repeating the process for various other forgotten or lost genres of music. Price demonstrates the ease with which commodities can be excavated from a previous existence as a non-commodity, essentially flipping the corporate gesture of branding and exposing to the masses a movement, concept, or situation previously imbued with hipster cred. He demythologizes the fabrication process and fills holes in consumerism that corporations have yet to plug, acting as both a glitch to the system and an inventor of sorts, testing out consumer reactions to his own products that look and seem like “the real thing.”

The opacity of “the real thing” is exactly what Nancy Drew’s strident body of work traffics in, seeming to posit that essentialism doubles as naïveté. Drew re-makes the work of modern masters, and her two shows at Roebling Hall have been akin to greatest hits compilations of art, except that these Mondrians, Stills, Pollocks, Manzonis, Johns, and Naumans are done up in glitter and flocking, rhinestones and feathers. Obviously, Drew is feminizing the modernist man-titans, seeing what happens when Ken slips into Barbie’s clothes. But she’s also extracting the museum experience from the museum, robbing it of its iron grip over the interpretation of modernist art history. The artist Olafur Eliasson has said of his own Weather Project installation at the Tate in London, “...I realized that the engagement with my work was being branded. You were having, for example, a Tate ‘experience’ when looking at The Weather Project…If the museum brands this experience, it’s no different than going to Macy’s.” The “Drew” experience is to realize that, as a viewer, you’ve never seen these (master)pieces without an attendant air of sanctity or specific expectation. You were in the presence of greatness; your experience was branded, not uniquely of your own psychology.

Guyton\Walker’s recent show at Greene Naftali cribs just as explicitly from art history (Warhol, Fischli and Weiss, Russian Constructivist graphics, and others), but whereas Drew enlivens the work she appropriates, the team of Wade Guyton and Kelley Walker utterly deaden it, corrupting it by combining images from art history with scanned objects, as well as using such images as labels for paint cans. Additionally, Ketel One Vodka ads and Vitamin Water labels pervaded the show, giving the entire atmosphere a corrupted aura, as if any second a salesman might burst from within the walls and aggressively hawk Warhol paintings or Vitamin Water. Surely there are copyright snafus just waiting to happen here, and the same seems true of Drew’s work. This challenge to the “owners” of such images is passive-aggressive, but certainly present.

What, then, are the implications of the artist staging such a coup? Does the theft of corporate identity and the challenge of corporations’ monopoly on commodity market access pose something resembling a real threat? Should Bouchet’s morals be questioned for outsourcing jeans to a sweatshop in Colombia, or was his gesture of giving the (generously one-size-fits-all) jeans back to their producers honest redemption? The pieces in this year’s Greater New York excepted, Price’s work seems to represent a negation of art as a singular fetish commodity; consequently, his distributed media appears in commercial zones autonomous from art world commerce. Instead of experimenting with integration into market systems, Drew and Guyton\Walker seem to be encouraging a showdown with the entities whose brands they plunder, undermining the persuasive magic of advertising and image dispersion. Each of these four artists poses something sincere and utopian. Their non-acceptance of images as truthful or authoritative, and a detournement of the notion that corporations are the only bodies capable of producing authentic products or experiences, or, in the words of Vitamin Water, “More of what you need.”

Can art change the world? American philosopher and educational reformer John Dewey (1859 – 1952) certainly thought so. Dewey's progressive politics and their relationship to art, more specifically how they illustrate social practice art as an aesthetic experience, are the focus of Chicago-based curator Mary Jane Jacob's new book, Dewey for Artists.