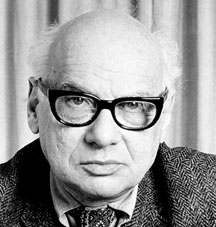 Anyone who has ever heard the composer Milton Babbitt speak, informally or formally, has come away awed by his sheer verbal facility. In the highly verbal community of contemporary music, he has long been regarded as a composer-talker’s talker. Even in his ninth decade, his ability to marshal pungent, informative sentences into coherent paragraphs has not waned: Speaking last month at the Works & Process concert celebrating his 89th birthday, his talk was as sharp as ever. And Babbitt writes as he speaks: with the complex, energized prose of the person who has so much to say that his sentences and his paragraphs can’t be long enough.

It has always been a mystery to me why someone so appreciative of books took so long to collect his fugitive writings into a single volume. Some of Babbitt’s writings were meant to be for literate audiences; others are less for professionals of music in general than for those involved with contemporary music in particular, and then with a particular tradition of high modernism epitomized by Béla Bartók, Edgar Varèse, Igor Stravinsky, and Arnold Schoenberg. These last essays invariably include musical examples not only with the familiar staves but also with a notational shorthand consisting entirely of numerals; they have such forbidding titles as "Twelve-Tone Invariants as Compositional Determinants," "Set Structure as Compositional Determinant," and "The Synthesis, Perception, and Specification of Musical Time"—titles that laymen couldn’t have coined if they tried.

A second sort of Babbitt essay is the tribute to musicians with whom he worked—the composers Roger Sessions, Stefan Wolpe, and Ben Weber, the pianist Robert Miller, and the British music administrator Hans Keller—because he would always be asked to speak or write for their memorials. Since Babbitt here was addressing an audience that necessarily included non-musicians, these are more accessible.

A final kind of Babbitt essay is meant for the larger literate audience, the most famous being “The Composer as Specialist” (1958), initially published with the more provocative title of “Who Cares If You Listen?” in which he articulated, in prose comprehensible to many, his elitist position that truly sophisticated contemporary music, much like advanced contemporary science, would be comprehensible only to a few, mostly centered in liberal arts universities (rather than music conservatories) and thus more predisposed to impressive talk. So classic is this last essay that I reprinted it in both editions of my anthology Esthetics Contemporary under its original title, Babbitt to my gratitude frequently recommending my book for that reason.

Other masterpieces of this last introductory kind include Babbitt’s memoirs, "On Having Been and Still Being an American Composer" (1989), "A Life of Learning" (1991), and "My Vienna Triangle" (1999), in which he connects the serial music developed in the Austrian capital to the empirical philosophy also dubbed “Vienna School”—a connection uniquely important to Babbitt, who subscribes to both (but not to Viennese psychology!).

The trouble with the Collected Essays is that the essays are reprinted thoughtlessly in chronological order by date of publication, such chronology making no sense at all except to children who know how to count. As a result, only a few would read this book from beginning to end, which is how a book is meant to be read, all doubletalk to the contrary notwithstanding.

A more intelligent sequence would have presented the third sort of Babbitt essay first, thereby introducing the radical position that the more complicated essays exemplify, thus inviting the reader fresh to Babbitt’s prose to progress as far through the book as he or she can. Here the editors could have also reprinted the brief program notes that Babbitt has written for individual compositions over the years. One about his clarinet quintet appeared in the saddle-stitched booklet accompanying a NYC concert by the Juilliard String Quartet as recently as May 2004. Their brevity notwithstanding, such essays are no less valuable, even if no more available, than were Babbitt’s longer texts.

You get the impression that for all their sophistication about music, the four professors editing this volume never critically considered the questions of what a “collected essays” should include or, concomitantly, how a book (not a website) of them might work best. Accounting for how such faux pas are made, is to be, as Babbitt would say, “characteristically unintelligible or unbelievable.”

One final caveat is that I recall not only program notes but yet other miscellaneous Babbitt texts, such as a witty poem initially published in Dwight Macdonald’s Journal Politics (1944–1949), that, yes, should have been reprinted here. Having heard the man speak for nearly four decades, I missed mementos of his politics I would characterize as rigorously (and unfashionably) un-left, which is not the same as anti-left.

Some 35 years ago, I included an extended profile of Babbitt in a book of major American artists and intellectuals titled Master Minds, along with more familiar world-class figures, such as Glenn Gould, Robert Rauschenberg, Allen Ginsberg, and Marshall McLuhan. Though younger bucks in contemporary music nowadays like to dismiss him, his music, and even his style of writing and speaking as passé, my estimate of Babbitt’s presence remains superlative.