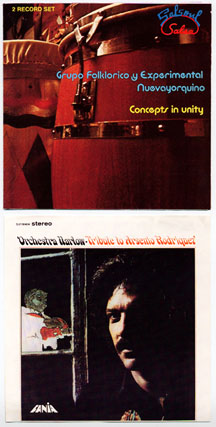 Colon replaced Lavoe with savvy songwriting sonero Ruben Blades. Their ’78 release, Siembra (regarded as salsa’s biggest seller and still huge on Latin radio), is a summit of that decade’s popular music in any genre. Colon had debuted during the watery, mid-sixties popularity of boogaloo, a thinning process salsa now ran in the search for broader sales. In ’75, though, Colon had engaged legendary Puerto Rican plena singer Mon Rivera on There Goes the Neighborhood, backing Rivera’s rapid, plaintive warble with an ace lineup and a fierce coro (chorus) featuring the leader, Blades, Lavoe, and Fe Ortiz—a telling display of the music’s imperative to engage its roots.

In Colon’s case, that meant Puerto Rico. The Cuban embargo was well into its second decade and, in bandleader Larry Harlow’s words, “Puerto Ricans had really supported our music.” Rene Lopez, one of Latin music’s great offstage presences as lay scholar and producer of Rockefeller Foundation and Smithsonian recordings, said in a phone interview that “Willie Colon goes back to Puerto Rican roots—not Cuban, but Puerto Rican. His Christmas album [’71’s Asalto Navideno, with its wildly successful “La Murga”] hit to the core: The cuatro player Yomo Toro sounds like God on that album, and Hector Lavoe—whose intonation I sometimes don’t like—when he sings more in the jibaro [country] style, he kills!”

Orchestra Harlow—whose Salsa went gold at mid-decade—had been surging on a layered sound of rhythm and trombones with burly coro, topped with violins and trumpets, even before their ’72 Tribute to Arsenio Rodriguez, which hit just after the man Lopez described as “the most important musician in the history of Cuban music” died in obscurity in L.A. Tribute updates Arsenio originals; the band’s Salsa, too, is primarily Arsenio music, with other choice picks from the songwriter’s trove jacking both Harlow’s and Johnny Pacheco’s late-sixties releases. The masters of Cuban piano had paid dues in Arsenio’s band—Lili Martinez and Ruben Gonzalez in Havana, Rene Hernandez in New York—before he permanently relocated to the Apple, still too raucous and too black for mainstream appeal. He appeared on cutting-edge roots releases: with bassist “Cachao” Lopez on Verve’s Patato y Totico in ’68, while a decade earlier his harsh vocals and rhythmically ornate tres guitar playing had spurred Sabu Martinez on the renowned conguero’s "Palo Congo" on Blue Note.

Harlow’s Tribute features Manny Oquendo’s fearless timbales and Yomo Toro’s cuatro guitar; the notes also credit Rene Lopez with research. “He’s always been very respectful of tipico music,” Lopez said, “that’s what I love about Larry. People hated him for introducing that goddamned electric piano [on ’71’s Electric Harlow], but it was going to happen anyway, and eventually everybody started using it.”

The credit Harlow gave Lopez’s musical acumen runs deep, pointing to the latter’s sway with a new band declaring its mission in its now-legendary name: Grupo Folklorico y Experimental Nuevoyorquino. Their two Salsoul releases, Concepts in Unity and Lo Dice Todo, strung a gauntlet at a time when sales policy was rapidly stripping the music’s originality. “Grupo was born of musicians playing with the popular bands as sidemen,” Rene Lopez said. “It was a reaction, an answer, to what was happening in salsa: the marketing of this music to follow the American concept, which was what Jerry Masucci [of Fania records] was doing. With certain exceptions, they were all Eddie Palmieri alums, including their lead trombone, Jose Rodriguez.

“And Eddie had a rule with all his young players,” Lopez continued, “with Andy and Jerry Gonzalez [Grupo’s bassist and conguero], with Nicky Marrero [Palmieri’s timbalero at age fourteen]”: Palmieri told them to spend time with Lopez. “They were intellectually curious, gifted people; the Gonzalez brothers attended the High School of Music and Arts. They all studied music and were already accomplished jazz, Latin jazz, and salsa musicians. I played them Los Munequitos de Matanzas [Cuba’s essential rumba group]—I was older, I used to see Mongo Santamaria’s group when he played at the Black Hawk in San Francisco. Andy, Jerry, [singer] Frankie Rodriguez, [conguero] Milton Cardona, and the other percussionists first called themselves El Conjunto Anabacoa, jamming in Andy’s basement apartment as this enormous spread of percussion and one trumpet player: [Alfredo] Chocolate Armenteros.”

“They would come to my house,” Lopez said of Grupo’s inception, “and we’d listen to music until three or four in the morning. They had other interests, like the music and religion of Santeria through Julito Collazo [who also recorded with La Perfecta]. In the 50s and 60s, he was the first real bata [ceremonial drums] player who played and taught in New York. He and Francisco Aguabella, another master bata player, came over with [choreographer] Katherine Dunham. Collazo, Aguabella, and other Cuban expats were the first to record guiero in the U.S.—they did that with Tito Puente on [’57's] Top Percussion for RCA.

“Grupo knew all that music, through myself and through their own initiatives. They were moving on to other things—Chocolate’s conjunto, and Manny, Andy, and Jerry formed Libre [splendid live to this day, Libre debuted in ’76 with the searing Con Ritmo…Con Salsa], so the Grupo was more of a recording concept,” Lopez explained. “But they knew they would kick ass, and my co-producer Andy Kaufman and I talked Joe Cayre [owner of the Salsoul label] into recording them.”

Over two April days in CBS Studios, Grupo Folklorico toploaded Concepts in Unity, a double LP of tracks at once loose and fierce, propulsive and rife with naked feeling, covering ground from Oquendo’s unleashed abandon on tracks like “Anabacoa” and “A Papa y a Mama” to jaunty Puerto Rican bombas and Francisco Martinez’s lolling harmonica.

“Besides what happened in the band context,” said Eddie Bobe in an interview, “a subculture always maintained the folklore traditions, in terms of drumming. Rene Lopez went to Cuba and brought back field recordings: Grupo Afro Cuba, Los Munequitos. That particular era he recorded was bata-rumba, and those recordings were incredible. Today, rumba is very erratic, speed and chop-driven. For that generation in Cuba, the rumba was still serene.

“The major [folkloric] colossus in New York was Julito Collazo. The drumming in his day was more secretive; it was still in a ceremonial setting, and private. The secular rumberos’d play in parks in Brooklyn, or uptown. It was a handful of participants, both high-caliber drummers who understood the nuances and vocabulary of the style, and regular people who just brought a drum.

“It began to grow in terms of recognition and prowess—we were getting the XYZs to our ABCs,” Bobe continued. “When I arrived in Central Park around ’75, ’76, I was already trained by my teacher, Frankie Malabe [Alegre All-Stars; Fania discs by Larry Harlow]. Orlando ‘Puntilla’ Rios [whose singing opens Bobe’s Piranha release, Central Park Rumba] brought the missing pieces in the 80s on the Mariel boatlift; he was the second colossus in the folkloric movement. Also on Mariel was Manuel Oliveras Martinez, who was an old man—his nickname was el Llanero Solitario, the Lone Ranger—and a great rumba singer.”

With jazz as the music’s other promised land, Julito Collazo’s top student was Steve Berrios, who with Jerry and Andy Gonzalez went on to co-found the brilliant post-bop, Latin jazz outfit, the Fort Apache Band. Through the 70s, Lopez recalled, “Mongo’s Latin jazz group popularized the conga drum around the world, while [conguero] Patato worked with Herbie Mann, Francisco Aguabella was with Peggy Lee, and George Shearing had Armando Peraza. And there was Rafael Cortijo’s break out, La Macchina del Tiempo, with guitarist Edgardo Miranda, like the avant-garde [Time Machine on Musical Productions; the buzz has pianist Chucho Valdes hearing the disc in Havana and forming his hyper-skilled band, Irakere, with Paquito d’Rivera and Arturo Sandoval]. Then, in 1973, Grupo Irakere makes their first recordings in Cuba, and we start hearing them here.”

And the limber revival rolled intently along.

The Alchemist:
A Profile of Jack Brogan

Wade in the Water

Since her beginnings as a key member of the Black Arts movement in the 1960s and seventies, Nikki Giovanni has shared her distinctive poetic voice with us. Hearing her doing so in this context feels like a homecoming.

Parenthood is essentially a temporary arrangement, but one that can provide an abundance of joy even in the most ordinary moments. Billie Zangewa refines this muddle of emotion in eight fabric collages that make up her current exhibition.

In the late sixties, Hantaï abandoned the rounded biomorphic contours for an all-over approach, seeking an increased flatness in the finished paintings, a project that occupied him for the rest of his career. It is this period of intense production, from the late-sixties through the seventies, that the current show surveys.