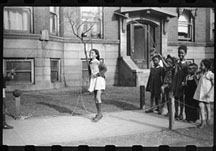 Jumping rope on the sidewalk, Chicago, Illinois, 1941. Photograph by Edwin Rosskam. Courtesy of Library of Congress Prints and Photographs Division.

This is the face of joy: a 10-year-old girl with an open, vulnerable smile as she jumps on one foot, turning twice to the right, twice to the left, then left over right, right over left, then 12 rapid high steps where her knees must rise above her waist. Her face is one of sheer delight as her braids and white cubic ponytail holders bob above her head.

The girl’s name is Angelise, and she has just completed a “compulsory”—the standard series of technical moves for double Dutch competitive jump rope. It is quite possible that Angelise has never been told by anyone in her life that she is good at a sport. The fifth grader from Public School 308 is severely overweight at roughly 160 pounds and just under five feet tall.

Here, Angelise is a star. Or she will be if she keeps jumping with these girls. Two double Dutch teams, the Junior Jumpers Unlimited and Baby Jumpers Unlimited, are practicing after school at the Police Athletic League in Bedford-Stuyvesant. The Junior girls are a fifth-grade team, although some of the jumpers are in the sixth and seventh grades, and the Baby girls are a third-grade team, although their ages vary a bit too.

Double Dutch is a cross section of culture and athleticism, play and performance. It’s like inserting yourself in a rope Rototiller. Two ropes are spun in opposite directions by a person at either end. Each team generally has four jumpers, almost always girls. The jumper or jumpers—one or two jumpers will go at a time—then insert themselves between the spinning ropes, both jumping simultaneously so as not to disrupt the ropes’ motion. The soft ropes range from 12 to 14 feet long and are approximately one-half inch in diameter. At the competitive level, double Dutch jumpers perform all sorts of athletic feats—such as handstands and flips—while between the ropes.

The Junior and Baby teams are following in big footsteps—their coaches’ earlier teams, Jumpers Unlimited and Jumpers Unlimited 2, both went on to win the New York state competitions and place in the World Championships. Their coaches, Betty Cooper, 63, and Rhonda Glasgow, 23, are both watching over the practice. Cooper, a gentle woman with long, graying braids, has been jumping for nearly six decades and coaching for more than two. Glasgow, a former student of Cooper’s, recently graduated from John Jay College and has been coaching for five years. Technically, the Junior and Baby teams are Glasgow’s—Cooper is just volunteering.

Glasgow, wearing a jean jacket and jeans, was an accomplished jumper herself in high school, going to the World Championships with her team, the Hot Steppers, under Cooper’s tutelage.

“We went to the World’s and came in fourth,” Glasgow says. “We came in first in the state for singles and doubles.” She is now employed part-time at the Police Athletic League, where she helps children with their homework and teaches double Dutch at $12 an hour.

As a seasoned coach, Cooper is paid quite a bit more. She teaches double Dutch two days a week at the Shell Bank School in Sheepshead Bay for $32.50 an hour, and also teaches at another school on Saturdays for $36 an hour. “It’s not bad money for doing something you love,” she concedes.

Cooper, who also designs dresses for church choirs, has been coaching double Dutch jumping since 1980 as a “positive learning alternative” for children in Brooklyn. Originally a program for children with learning difficulties, it soon gained momentum as a competitive sport and eventually attracted higher-performing children.

Daziah, a pretty fourth grader with braids, just started jumping this past fall. As she puts her earrings back on after practice, the 9-year-old says, “My mother tries to teach me. She used to jump really good.” Daziah is also a student at P.S. 308 in Bedford-Stuyvesant. When asked if her mother is as good at double Dutch as Cooper, she glances at the coach and smiles. “I don’t think so!”

Cooper says of the “problem kids” she started off coaching, “it helped them to come to school more often, and lot of them did pass their grades.” All four of the eighth-grade girls on last year’s team, Jumpers Unlimited 2, have since gone on to high school. Their squad placed second overall at the World Double Dutch competition in Sumter, South Carolina, an impressive feat for girls who had been jumping for only a year or two.

Cooper has been coaching competitive teams since 1985, and for the last three consecutive years her teams from Middle School 143 in Bed-Stuy have gone on to the World Championship.

Quadasha, 10, is on Baby Jumpers Unlimited and says that while her teammates, Diamond and Daziah, are in third and fourth grade, respectively, “I’m in the fifth grade.” When asked about her favorite part of double Dutch, Quadasha tilts her head and answers, “Freestyle, because you get to do a lot of tricks in the rope.”

While jump rope has been a pastime among American children for generations, particularly in black communities, it is only in the last few decades that double Dutch has attracted respect as a legitimate athletic and artistic endeavor.

The recognized founder of competitive double Dutch is David Walker, the president of the National Double Dutch League, which is based in New York City. The league hosts regular double Dutch competitions, including the annual Holiday Classic competition, which is hosted at the Apollo Theater in Harlem. Betty Cooper’s Unlimited Jumpers 2 from M.S. 143 competed in 2003, where they placed second in one category—novice fusion—and fifth and sixth in two others, speed and compulsory.

“In 1974, that’s when it started, in Harlem, at Intermediate School 10,” Walker says. Then a New York police detective, Walker and his partner, Detective Ulysses Williams, worked with physical education instructors at I.S. 10 to devise rules and structure that would transform the game into a competitive sport.

“We were helping youngsters to understand the right side of life from the left,” Walker said. “Literally, too. Some kids, you’d ask them to hold out their right hand and they’d put out their left.”

Walker and Williams devised three arenas for judgment in double Dutch jumping, similar to the rating scales in figure skating: compulsory, which is the technicality of a jump routine; endurance or speed, which is measured by how many times a jumper’s left foot touches the ground in two minutes; and freestyle, which measures the creativity and artistry of a routine.

According to Cooper, Walker’s goal of using double Dutch to improve the lives of young women has worked out for some of her Brooklyn jumpers. “I want to say that 80% finish high school once they start to jump,” Cooper says of her jumpers, “and 70% of them go on to college. It gives them such a positive attitude and an incentive to achieve.”

Walker speculates that the origins of jump rope lie in ancient Phoenician, Chinese, and Egyptian rope makers who had to jump nimbly over ropes as they were winding them. The Dutch then brought the sport to New Amsterdam—what today is New York City—and the game was called double Dutch by the English. As radio boomed in the 1950s, and as the amount of public recreation space dwindled, the game was almost eliminated in the United States. By legitimizing double Dutch as a sport, Walker and his partner may have saved it from vanishing.

Cooper’s own beginnings with double Dutch originate not in ancient Egypt but with laundry. “Our mothers would have clotheslines from the laundry, and they would give us the leftover clotheslines,” she says. “We would jump underneath the window out on the sidewalk so they could see where we were.” The coach says that as a girl, she would start jumping at 9 a.m. on a Saturday and would keep going until dinnertime.

Although the third- and fifth-grade teams in Bed-Stuy have been working hard, Glasgow feared that they would not be ready for the state competition in Bellport, Long Island, on May 7. She had no reason to worry: the Baby girls came in first place and the Junior girls came in second.

“It’s really something,” Cooper says. “Both teams are going to go on to the World’s, which are being held June 16 to 18 in Sumter, South Carolina.” Cooper says both teams could use help in order to make the trip to the competition, and contributions can be directed to the Police Athletic League at 495 Gates Avenue, earmarked for the double Dutch teams.

The girls on Junior Jumpers Unlimited and Baby Jumpers Unlimited did well in the state competition—better than expected of such new teams. Now they’re hard at work training for the World Championships, jumping in time to Cooper’s melodic, “one, two, one, two.” Angelise, “the chubby girl,” as Cooper calls her, is not on a team yet because she only just started double Dutch. She looks on as one of the more experienced girls, Shakira, squats on the floor, doing “tricks” while jumping.

“Those look pretty tough,” Angelise says. “But if I think I can do it, I can probably do it.”

Music-making is a social activity, bringing people together into a temporary society and culture that exists around the performance. Culture is how we share and pass on ideas and values, so it is important for venues and institutions to look beyond the pandemic and plan on once again creating these myriad enlivening evenings of small societies with shared pleasures and purpose.

Culture as Strategy for Survival

Erasure of local cultures as a viable tool of imperialism has been systematically used by hegemonic powers since the dawn of time.

Loot Sweets, on view at Bridget Donahue in New York until September 25, is a heady collage of found objects, paper scraps, and nostalgia that transforms into an uneasy meditation on consumption as a performance—on the things we buy, make, and throw away as an extension of self and culture.