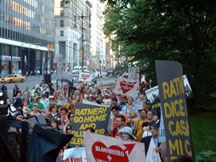 On May 26, the Economic Development Committee of the City Council held a public hearing about Forest City Ratner’s Atlantic Yards proposal. As the first city council meeting about the project, many residents hoped for a genuine forum to voice their opinions to elected officials about this substantial development.

Unfortunately, in keeping with the tenor of the dialogue thus far, Forest City’s presentation took up most of the available time, leaving the public a small window in which to comment. Additionally, due to a poor choice of venue, many who looked forward to participating were literally shut out due to the “safety and security” concerns of the building management. In the lobby of 250 Broadway, where the meeting was held, a zealous guard threatened Schellie Hagan and others with removal from the building for the egregious offense of asking when they might get in. Another guard quipped, “No room at the inn,” to a coworker while gazing at the line of distraught neighbors. At one point, the queue of the unfortunate extended to the end of the block on that gloomy afternoon. 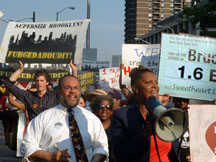 Council Speaker Gifford Miller noted that the city council “made an exception,” mentioning that “during May this was the only hearing not on the budget.” Miller did not mention for whom the exception was made, but it is worth noting that committee member Letitia James, the councilwoman representing the affected district, “had asked that [the committee] adjourn the meeting” but was dismayed that “they chose to move ahead.”

Committee Chairman James Sanders, Jr. “personally warned those in authority” that the meeting room would be insufficient for such an important hearing and believed that, “ultimately the people deserve a type of respect that is not shown by having them stand in line.” When asked to elaborate as to who “in authority” was warned, the councilman would only offer “the staff that makes the room assignments,” conjuring images of a Brazil-like bureaucracy where nameless, faceless bodies switch to metric without telling anyone.

Alas, an exception was indeed made for someone, and it wasn’t for the speaker, the committee chair, or the councilwoman representing the affected district. Perhaps it was for Forest City Ratner, who took the full opportunity to carpet bomb the media with new information, including making more or less official the idea that the number of residential units will now be over 6,000 (with as many as 7,300 being considered), that the project is now expected to cost a distended $3.5 billion, and that the Forest City–owned property on Flatbush Avenue across from the rail yards—which is currently home to Modell’s and P.C. Richard’s stores—may also become home to another high rise.

For nondevelopers in the cheap seats, the whole affair was universally derided. James Caldwell, President of BUILD—a group in support of the project—was taken aback. “At first, [the committee] didn’t want me to speak,” he commented afterward. Fortunately, Caldwell was ultimately given a chance to comment but summed up, “I didn’t think [the hearing] was a great process.”

Daniel Goldstein of Develop Don’t Destroy Brooklyn was given a time limit to his comments, and in the end there were some who never got an opportunity to make comments. In his statement, Goldstein implored the city council to end “developer first, community last” building, which he says is exemplified in the Atlantic Yards proposal. Noting Ratner and many of FCR’s officers’ former lives in public service, he accused the developer of “learn[ing] to game that system in the private sector over the last twenty years or so. [Ratner] learned how to feed off the public trough, put more risk on the public than himself.”

Referring to the arena as a “sideshow,” Goldstein also demanded that “if the goal is to build ‘affordable housing,’ then let’s build affordable housing, not a sinkhole that would diminish the quality of life for those living in the new housing.”

Less than a week prior, the affordable housing Memorandum of Understanding (MOU) between Forest City and ACORN arrived with an exuberant Bertha Lewis planting kisses on the billionaire mugs of both Bruce Ratner and Michael Bloomberg in late May. The smooches came during the Borough Hall photo op where the housing deal was announced.

This MOU was not entered into with the city or state, but it does commit Forest City to what is referred to as the “ACORN/Atlantic Yards 50/50 Program,” in which 20% of the 4,500 residential units mentioned would be set aside for low-income residents and 30% for middle-income families. The remainder would be market rate. Worth mentioning is that despite the relatively concurrent announcement that the Atlantic Yards will likely contain far more residential units, the document limply offers that “both the Developer and ACORN will work towards developing a program that follows the same guidelines and principles set forth” in the agreement.

The memorandum is pretty much a contract to contract, as it hinges on the ultimate sale of MTA lands to Ratner as well as the approval of the Empire State Development Corporation (ESDC), the city, and others. Nonetheless, it heartened even longtime critics such as Councilwoman James that the long-discussed housing plan had made its way into writing. “I applaud the administration and ACORN for reaching this agreement,” she said, but admonished that “it should not be quid pro quo that you’ve got to accept the housing with the arena.”

The document does provide some puzzles for Brooklynites to mull over. There is a seemingly stringent confidentiality clause. Also, while it does compel the developer to action at future points unknown, paragraph 3 calls on ACORN “to take reasonable steps to publicly support the Project by, among other things, appearing with the Developer before the [city, state, ESDC, and MTA] community organizations and the media as part of a coordinated effort to realize and advance the Project and the contemplated creation of affordable housing” for as long as it includes the 50/50 housing program. In other words, it appears that ACORN must shill for Ratner from now until the last affordable housing unit is constructed in order for Forest City to build them at all. ACORN could not be reached for comment.

The Rail was recently privy to a working draft of the long discussed Community Benefits Agreement (CBA) between a small coalition of community groups and individuals (including ACORN, BUILD, and the Reverend Herbert Daughtry) and Forest City Ratner. Languishing to the point where its existence could be fairly questioned, the CBA does in fact look to be near completion, which is another feather in supporters’ caps. As such, there were points in the draft that should concern even the most ardent fan of the Atlantic Yards proposal.

If the document is a mere weeks away, as most who are involved note, it is distressing that there are clauses in the draft that would allow Ratner out of many of his obligations with mild monetary penalties.

It is also notable that, beyond a series of councils that the CBA will set up to monitor various aspects of the agreement, the only direct recourse for the public to bring grievances will be through the Downtown Brooklyn Advisory and Oversight Committee (DBAOC), and there will be no state enforceability of the agreement. This is of particularly acute concern because of the present difficulty one might encounter finding the oversight group. A quick Internet search for the DBOAC finds a page full of links to articles regarding the CBA which, further, only offer the committee among a list of participants. There was also no phone number available through directory assistance.

Marie Louis of BUILD notes that there are “still some things that we have to work out” for the agreement to be finalized, including the compensatory measures Forest City would be required to make for not living up to their end of the agreement. Further, she felt that attempts to “push for the state to play a part would delay” the release of the CBA. “We’re not going to try to fight with the state. Our lawyers felt comfortable with that,” she concludes.

BUILD and other participants in the CBA negotiations accept many of Bruce Ratner’s boasts regarding Atlantic Yards with the sincere belief that the community will be able to hold Forest City to the contract. A weak or even mediocre CBA will effectively only leave them with the developer’s track record of previous Brooklyn projects—the MetroTech and the Atlantic Avenue malls. With these, the delivery on stated promises was spotty at best. With regards to generating local jobs, it would be a stretch to say even that.

In addition to this long-anticipated agreement, June will also see the United States Supreme Court rule on the Kelo v. New London case, which should, at the very least, better define the limits of eminent domain use. Depending on the breadth of the decision, those who have not sold out to Ratner could effectively force the developer to become far more transparent regarding his designs on Prospect Heights.

Forest City has thus far dictated how and when it will communicate information regarding their colossal proposal. The company offers the sky in the future for allegiance and silence today. Gifford Miller promises, “We’ll keep having hearings until everybody’s heard from.” But, as Daniel Goldstein said in his testimony at the hearing, “the people of Brooklyn did not vote for Bruce Ratner to plan our futures.” So when will those we did elect stop caving in to his tactics and abetting his game playing, and start demanding that he answer questions and appear in forums on the people’s terms? It is, after all, our money and our neighborhood that he’s after.

BRIAN CARREIRA is a writer living in Prospect Lefferts Gardens. You can follow him on Twitter @BrianCarreira.

Deschamps’s interest in the losses and gains through the process of translation illustrated a mode of construction based on altered meanings. Just like a foreign language, the hotel is an abstract location that, through a visual and literary discovery process, becomes a familiar one.

Somehow Abdul, on the stage of the Shrine Auditorium in 1990, makes it look as if her dance couldn’t exist with any less space, but replicating (to the best of my ability) her dance in close quarters is a reminder of how dancers can expand the most confined of spaces. Abdul only needed a bathroom and half a mirror.