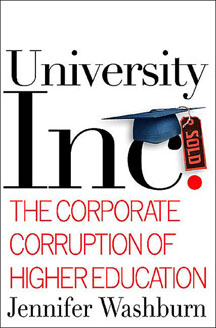 Expanding on a subject she originally wrote about six years ago in the Atlantic Monthly (“The Kept University”), author Jennifer Washburn’s University, Inc. (Basic Books, 2005) explains the troubling collusion between higher education and corporations. Norman Kelley recently sat down with Washburn at her Park Slope apartment.

Norman Kelley (Rail): American higher education is under attack from two forces: the market and right-wing ideology. Your book focuses on market forces. Here’s the full title: University, Inc.: The Corporate Corruption of Higher Education. What exactly do you mean by “the corporate corruption of higher education?”

Jennifer Washburn: Well, essentially I’m looking at how, over the last 20 years, universities have been drawing more and more of their support from private industry. Industry funding has gone up about 8% annually since 1980, rising to about two billion dollars a year today. But the other part of my argument is not just that outside corporations are funding universities more, but that universities themselves are also starting to look and behave like for-profit corporations. Thus, we are seeing that they are running their own industrial parks, their own venture capital funds, and some universities even have early-stage drug development operations that previously were something only the drug industry did. Some also have very expensive patenting and licensing operations. So in many ways we’re really starting to see them mimic the commercial sector.

Washburn: There’s nothing wrong with making money and certainly nothing wrong with universities having ties to the commercial sector. Dating back to the mid-nineteenth century, universities have had close relationships with private industry and these are very important for transferring academic knowledge to the private sector so it can be developed into the commercial products that we can benefit from. The problem is that it’s also been critical that we have a place in our society that can perform research that is not simply driven by the bottom line. It’s also been essential that we have a sphere in our society that can provide a really broad-based and well-rounded education and not simply serve as a training ground for industry. In terms of having checks and balances in our society and functioning as a true democracy, it’s critical that the university be there to perform independent research, and also to nurture critical thinking and critical thought.

Rail: When did this shift begin? In your book, you discuss the 1980 Bayh-Dole Act. Tell us about it.

Washburn: Congress passed the legislation because our leaders started measuring our society versus foreign competition. In the late 70s we were facing growing competition from Germany and Japan, our economy was stagnating—and so Congressional leaders thought, “Well, why is that we fund so much research in this country, but we’re not able to compete?” They thought that if they gave universities automatic intellectual property rights to federally funded research, that this would stimulate innovation, and that it would speed the transfer of academic knowledge to industry.

Washburn: That’s a longer discussion. Universities put out very convincing statistics that say, for instance, that by 2000 the U.S. had generated $40 billion in sales from products that had stemmed from academic research. They also claimed that was associated with approximately 270 thousand jobs. But it turns out that those statistics—I spoke to economists, and in the book I break down the numbers—those are very erroneous, the way they’re used. Basically there is not good statistical evidence that the Bayh-Dole Act is actually responsible for all of that. We don’t know how much of that academic invention would have happened without the Bayh-Dole Act. So what you need to be able to measure is the pre and post-Bayh-Dole numbers and that’s precisely what we don’t have. Universities tend to claim that absolutely anything that comes out of the university now is evidence of Bayh-Dole success, but in fact universities transferred knowledge to industry all the time prior to Bayh-Dole—they just did it through open channels, through publication, through graduate students going on to work in industry, through informal relationships with private industry that professors had. So now most of the focus since Bayh-Dole is on licensing, because universities, now that they own property rights to federally funded research, can license that research to industry in exchange for royalties.

Rail: One of your concerns is that private corporate funding institutes a proprietary relationship, and you argue that this has a bad effect on the accumulation of knowledge within the university setting, correct?

Washburn: Yes, this is a big problem with the Bayh-Dole Act. As I say, it basically encouraged universities to start treating their academic knowledge just the way a private company would. They slapped proprietary restrictions on their research, and tried to then find ways to commercialize it, and to generate profits—part of which would come back to the university. A good example of this is when a researcher at the University of Utah discovered the human gene that is responsible for hereditary breast cancer. Rather than making that gene broadly available to the scientific community, the university actually raced to patent the gene, and license the exclusive monopoly rights to the professor’s own startup company, a company by the name of Myriad Genetics. So we, the U.S. taxpayers, paid 4.6 million dollars to research and discover that invention, and now the University licensed the rights exclusively to one company. That company then proceeded to hoard the gene, and prevent other academic scientists throughout the United States and the world from using it in their own breast cancer research and diagnostic testing. So I think that’s a really clear example of how the intrusion of a proprietary culture into the university has been harmful in terms of the broader innovation system.

Rail: This also shows a closing down of the intellectual commons, so to speak.

Washburn: True. Science is a cumulative process, by which I mean anyone who is in the sciences acknowledges that the work that they do rests on the discoveries of those who’ve come before them. And increasingly what’s happened is that universities—which used to play a critical role in safeguarding this public domain for knowledge, in making sure that the basic building blocks of science were available to everyone—are now acting like private companies. They’re slapping these restrictions on research, and really creating proprietary fences around new information that can actually impede discovery in the future. Economists and historians of scientific innovation, and even some leaders in industry, are now increasingly concerned about this.

Rail: One of the other things you discovered is that as the hard sciences, or discipline sciences—medicine, pharmacology, biotechnology—become more profitable, there also seems to be a decline in the humanities at universities.

Washburn: Yes, there’s been a real shift away from subjects that can’t be self-supporting, but subjects that make money, study money, or attract money are doing fine. Business classes are doing fine, as are business schools, law schools, economics classes—but the humanities have never been a very lucrative part of the university, and they’ve always required subsidy, and now increasingly universities are not subsidizing them sufficiently. And so their support is declining.

Washburn: Historically, yes, U.S. universities have always had a more utilitarian orientation. Consider the history of the land grant colleges, or the notion that university professors should provide public service—both are distinctly American ideas. U.S. professors have always been expected to do research and teaching but also to provide expert advice to government, expert advice to other industries, and in the sciences they’ve worked very closely with agricultural interests. There is a long history of this relationship here, whereas Europe has long had what we think of as the “ivory tower,” where intellectual inquiry is entirely removed from what’s going on in the broader society.

Rail: Some people might argue that the American form might be a little better, or at least more democratic, while the European form is more elitist.

Washburn: You’re right, but it’s interesting because we’re now hearing people who defend the current academic/industry alliance say, “There’s nothing new here, we’ve been doing this all along, this is part of the American tradition.” And in some sense, they make a good point—but what they’re not acknowledging is that in the past, yes, universities had relationships with industry, but as I said, most of the knowledge was transferred through open means, not through these proprietary means. And also, the universities themselves were not trying to profit off of their own research. The U.S. university professors were not actually going into business themselves.

Rail: Ultimately, you feel that this process threatens the autonomy of universities, yes?

Washburn: Yes, I think this really goes to the crux of what my concern is. Historically, universities have fought very hard to preserve their independence from various outside interest groups—whether they were political, religious, or commercial. They didn’t always do so perfectly, and didn’t always maintain their autonomy—we know that during the McCarthy era, political intrusions into the academic sphere, and that throughout the Cold War, the military exercised far too much influence over academic researchers. But it’s important to note that in all of those cases, the university professors, and various constituencies within the universities, fought back to preserve their autonomy and their independence. What concerns me today is that no one’s fighting back. Since Bayh-Dole, there’s been no stigma attached to commercialism, and so university administrators have embraced it. And since they’re actually profiting from it, they have no interest in stopping it. And since so many professors now have a financial interest in their own research—holding patent rights to the drugs they’re testing and equity interest in the companies that stand to profit off their research—neither are they defending the university’s autonomy.

What’s the Use of a University?

By Samuel Feldblum and John Schmidt

The history of the University of California over the last half-century has been written through protest. Student movements and labor actions alike erupt iteratively in response to changes in the UC’s structure. Amid one longer struggle, each generation fights its own particular battles.

Maria Speth’s epic vérité portrait of pedagogy in action was among the standouts in this year’s Berlinale competition, a work that respects its viewer in much the same way that its subject respects his pupils.