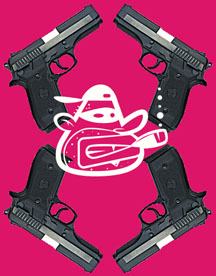 I am jogging down a side street near my home in San Francisco; the sun is setting. Suddenly, a huge SUV surges up behind me. I race to get out of the way. As it careens past, I yell, “Slow the fuck down!” It’s the type of vehicle favored by the dotcom Yuppies who have nearly destroyed this town.

The SUV skids to a halt. “What the fuck did you say?” This guy seems like a fraud, and in SF gangsters don’t drive SUVs.

Then I see the gun tucked in his waistband. An automatic, like a nine-millimeter or .45. He’s lifting his sweatshirt with one hand, ready to reach with the other. It’s a pose, the type of dick-oriented fantasy posture that some guys make in front of the mirror while riffing out on the memory of bad films. Then the gun is in my face, held sideways for style. Just like on TV. The macho tropes are all so stock, so familiar. The smell of pop culture is everywhere. It’s all an act, but it’s also real.

“What! What the fuck did you say?” yells my assailant.

I put my hands up in front of me, instinctively trying to calm the situation. A second guy, a passenger who seems about my age with long blonde hair, is now out and grabbing my throat. I compress my neck to thwart his grip but keep my eyes on the gun. Everything moves very slowly. Just like in the movies.

The guy with the gun slams the pistol across my face; I put my hands up to block, and the passenger starts swinging. I can imagine how cool they feel. It later turns out they’ve had very few experiences like this. But check it out: now they are inside the movie, acting just like John Wayne or Shaft or Captain Kirk. They’re heroes. It’s the way of the American Man.

I am blocking, protecting my face; their blows make contact with my arms and the back of my head. Then, the gun hits me on the last vertebrae before my skull, and I go out. Witnesses said they kicked me in the head several times.

I hear the clap of the pistol shot and wake up on the sidewalk. I notice that someone has painted the concrete with red diamonds. Gun Boy has just fired at my head and missed. There are shouts and tires screeching away. I think: even if I’ve been shot, I am going to get up and walk out of here. And as I think this, I am aware that it’s a ridiculous idea, the type of silly notion held by people in shock. As I push up off the ground the entire inside of my skull throbs with one tremendous grating pulse, and I pass out.

Aaron Rush, Gun Boy, was then 27. His mother was a Stinson Beach yoga teacher, and he looks white like his mother but is part Asian or Black. He had hopes of a music career, worked as a security guard, lived in a peaceful little beach town, and had no criminal record whatsoever. Two blocks away from where he tried to kill me, Aaron Rush and his drug-addled buddy, Timothy Crandall, make their second big mistake.

Pulling away from the scene, they find themselves directly in front of the Mission District police station. They turn down a small street, and pull up onto the sidewalk near the Albion Bar. Rush is still hopped up on the fantasy. So when a homeless recycler named Joe Turner looks askance at the two men bailing out of the SUV in the middle of the sidewalk, Gun Boy replays his favorite scene.

“What are you looking at, bitch?”

Now, Joe Turner has the sideways gangsta gun to his head. “Better not say shit.” Rush lets go of his prey, and he and Crandall head into the Albion for cover while Joe Turner heads into the street looking for cops.

Cruising down 16th come two police officers in a white Crown Victoria, no hubcaps. It’s one of those “undercover” cop cars, the kind that always contain two beefy white guys with mustaches and plaid shirts. They’re the kind of strange dudes who come up to you from out of nowhere, call you “guy,” and want to score drugs. Turner hails the car and directs the officers into the bar.

And this, according to the police and other witnesses, is how it goes down:

Rush and Crandall are at the bar trying to be cool, but Rush has cut his hand somehow. The two cops go straight up to Rush and ask, in that totally-out-of-the-blue-cop sort of way, “What happened to your hand?”

Rush has the clarity of mind to answer, “We had to kick some dude’s ass.”

“Yeah, I got my ID right here.” Gun Boy lifts his shirt to reveal the piece tucked in his waistband.

The cops aren’t happy about this. Suddenly Aaron Rush is on the floor and a cop is stepping on his neck, weapon drawn. Backup is fast and thick. The fading light of evening is illuminated with red and blue strobes.

It turns out that Aaron Rush is not actually in a rap video or a gangster flick. He’s never been under arrest. And, now, he’s instantly very sober. The movie has stopped, and he wants to see a lawyer, wants to know what the charges are, wants to know when he’ll be arraigned. He wants to call his mother, the yoga teacher.

Timothy Crandall, 28, is from a working-class family of Okie stock, not a pampered bohemian only son. He’s wasted: drunk, been smoking weed, and is most likely tweaking on speed. Crandall is fresh out of rehab, his father has just died, and young Timmy is back in town for the funeral. He uses the occasion to fall off the wagon with a bang. He, too, has no criminal record, save one little possession bust. When the cops lock him alone in a squad car, he completely flips out—swearing, yelling, weeping, screaming, and kicking the seats.

Witnesses think I’ve been killed. The cops think it’s a gang related and begin circling out from the scene. I remember the paramedics lifting my shirt and asking me where I’d been shot. The next thing I remember is ten hours later.

“Why are you checking my reflexes?” I ask the nurse. I feel relaxed and warm and very glad to be around people, but my memory is only 30 seconds long. I can’t remember the last six months at all, and every new thing I learn is forgotten in exactly 30 seconds.

“You were injured. You have a concussion.”

Also tending to me is one Officer Costello. “Costello?” I ask. “Are you Italian American?’

“No, I am Irish American,” he responds.

Then it starts all over again. “Costello? Is that Italian?”

Luckily, I’ve sustained no major injuries from having my brain slammed against the inside of my skull. The effects of that should wear off, and I’ll be no more brain damaged than I was before.

Eventually I am released into the custody of some close friends. They take me home to my apartment. I explore my office—a small, comfortably familiar, yet somehow exotic nook. It’s full of my books and papers strewn around in suspended animation; they look as if they’ve been arranged for me, by somebody else. I feel like I’ve been transported forward in time, but only by a little bit.

Soon I am back to reality, but still pretty spaced out. During all this, my memory of being beaten and shot at float in my mind like a dream. The next day I walk back to 84 Sycamore and the patch of red-diamond painted sidewalk where death passed me by. Looking around, I realize the dream is a memory.

Later, I am questioned by a steely Chicano detective, Inspector Sarujo. He’s straight out of a noir novel: pockmarked face, brown sports coat, Marlboro Lights, dead eyes that look right through you. In fact, he’s so noir that, if a writer made him up, an editor would say to tone it down. Now the question of what I remember becomes very political, technical, and crucial. I do my best. Eventually my assailants plead guilty—Crandall will get three years, while Rush gets four.

Strangely I feel very little resentment toward my two would-be assassins; nor do I feel any sympathy or mercy for them. I know exactly what happened to them—they were high on celluloid representations of masculinity and they almost OD-ed.

I know I am supposed to feel more about all of this than I do, but really I don’t feel anything. My interest in the case is literary or cinematic. I watch it unfold, just as Gun Boy and Side Kick watched themselves make a series of seemingly unreal choices.

People say that men are classically cut off from their emotions. Maybe we aren’t cut off so much as over-mediated, so used to watching the templates of masculinity that we confuse the real and the imaginary. My detachment is like their detachment, a product of over-mediated, clichéd masculinity: the internalized templates, the movie, the near-death experience as literature.

The one time I meet my assailants in court, I sit right behind Crandall. I watch him act polite and confident; I watch him act to comfort his mother, and I watch his jaw tighten as the silent waves of regret wash over him. In that moment, I can relate completely. It’s that feeling you have during the first five seconds of a car accident, where you feel like you’re watching a movie.

Later, while reporting in Iraq, I would see the same sort of imaginary masculinity motivating American soldiers—motivating them to be cruel, but also heroic and generous. And at those times I would let my mind drift back to Gun Boy and Side Kick. I would imagine them in prison and wonder how they were doing, what tropes were playing out. Then some times I would wait for a big insight, or even a little insight, and I would feel nothing.