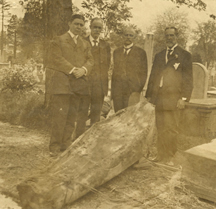 In 1898, the grave of New York’s first governor, George Clinton, was opened in Washington, D.C., the coffin removed, his bones examined and then reassembled in a new coffin, which was buried with great fanfare under a monument in the Old Dutch Reform Graveyard in Kingston, NY. Photo courtesy of Senate House State Historic Site (NY State Office of Parks, Recreation and Historical Preservation).

Recently waves of neo-conservative historical revisionism have been washing over us in New York, exalting as true patriots such Founding-Father figures as Alexander Hamilton, and his reactionary clique of bankers and would-be aristocrats. A conspicuous silence seems to have fallen over the real New York Revolutionaries, however. No fat new biographies and no big museum shows are being launched to puff the memory of genuine radicals like George Clinton.

George Clinton, Revolutionary hero and first Governor of New York (elected seven times between 1777 and 1800), bravely defended the Revolutionary Hudson Valley against the Brits and won General Washington’s undying admiration, gratitude, and friendship. Clinton hailed from Ulster County, and the Hudson Valley region never deserted him; he carried it in every one of his seven re-elections.

Governor Clinton was a genuine fire-snorting radical democrat. No “reluctant revolutionary,” he never gave up his adherence to the party of Patrick Henry, Richard Henry Lee, Sam Adams, Tom Paine, and the Sons of Liberty.

Henry David Thoreau later summed up this American tradition by praising “that government which governs least”—or preferably “not at all”—over all forms of despotism and centralized power. The founding documents of this tradition were the Declaration of Independence and the Articles of Confederation. For its time the Articles of Confederation was undoubtedly the most radical constitution of any government in history. It seriously attempted to realize the goals of the Declaration—life, liberty, pursuit of happiness—as law. Each of the thirteen states remained independent. They federated together in a “league of friendship” (probably based in part on the Constitution of the Iroquois Six Nations) for defense and trade, but gave away no rights to the “continental” government: no right to tax or to keep a standing army, for example.

The reluctant revolutionaries, the rich, the self-proclaimed aristocrats such as Hamilton, Jay, Morris, and the big New York patrons and their ilk in other states all hated the Articles and accused it of leveling and anarchic tendencies, inefficiency, mob rule, and worst of all—flagrant “democracy.”

Richard Henry Lee of Virginia was probably the most distinguished radical president of the United States under the Articles. The presidents were limited to a one-year term, and no member of Congress was allowed to serve more than three years in six. Their salaries were paid by the states and they were “revocable delegates,” not “representatives” in the modern sense. In other words, this was not a republic, but a true democracy.

Radical democrats like Clinton realized that the Articles needed some amendment, and New York gladly sent delegates to the 1787 Convention called in Philadelphia to consider such changes. But when the New Yorkers arrived and discovered that the Convention intended to junk the Articles altogether and write a new Constitution, two of our delegates withdrew in disgust, claiming that the convention was “illegal.” And so it was. Technically speaking, the U.S. Constitution was to be a coup d’etat.

Right-wing conspirators like Alex Hamilton (the third NY delegate) now pre-empted the popular label “Federalist” for themselves, although in fact they despised real federation and wanted a “national” or powerful central government. These self-proclaimed “Federalists” had most of the money and controlled most of the press.

The democrats, the true federalists, became known paradoxically as “Anti-Federalists.” (In New York they called themselves Federal Republicans, but the name never caught on outside the state.) The Anti-Feds had little money or media access, but counted on mustering the poor, the mechanics and farmers, the honest revolutionaries—the People—to their just cause.

And in fact, in New York, the majority of voters were fiercely Anti-Federalist. While Clinton held office the aristo’s could do nothing except in New York City, which they partially controlled. Ulster County was the most Anti-Federalist of all counties, in part because it lacked big patronships and consisted mostly of small independent “yeoman” farms, the agrarian backbone of the radical revolution. And in part, of course, out of love and loyalty to George Clinton, local hero.

During the period of debate over the Constitution, the Federalists had all the advantages of wealth, education, ownership of the press, and superiority of eloquence. (In high school today we study the Federalist Papers, while the Anti-Federalist Papers are ignored and forgotten.) The true democrats were put on the defensive, out-maneuvered politically by the rightists, blamed for Shay’s Rebellion in Massachusetts, and depicted as dangerous rebels. Once in power the right passed the Alien and Sedition Act, the “homeland security bill” of its day, to censor and suppress their ideological enemies on the left.

The old standard biography of Clinton is called His Excellency George Clinton, Critic of the Constitution (E.W. Spaulding, 1938) because his opposition to that counter-revolutionary document was the high point of his career as revolutionary governor. The true democrats like Clinton, Sam Adams, and R.H. Lee are mostly suppressed and ignored by neo-conservative historians, or even slandered and libeled. Even in New York, Clinton is scarcely remembered as an ultra-radical. And yet, under the pen name “Cato” he attacked the Hamiltonian cabal as crypto monarchists. (Hamilton responded under the pen name “Caesar!”) Clinton as governor attempted to steer the state legislature along a path of militant resistance to centralism and authoritarianism—i.e., to the Constitution.

It was a losing battle, however. Hamilton pulled off a brilliant coup in the NY legislature. As state after state ratified the new Constitution, by 1789 the NY democrats were faced with the choice of capitulation or open revolt. New York tried to insist on amendments and attempted to reserve the right of secession.

It’s a little-known but curious fact that New York, along with Virginia and Rhode Island, actually did reserve the right to secede. These claims were made in the Ordinances to the Acts by which they ratified the Constitution and acceded to the new United States of America. New York declared that “the powers of government and may be reassumed by the people whenever it shall become necessary to their happiness.” These ordinances have never been rescinded, not even after the Civil War, and are presumably still valid.

But the Clintonians were finally defeated. The Revolution was truly ended now, and the Declaration of Independence reduced to a shibboleth. The Bill of Rights restored some measure of democracy. It was largely the work of R.H. Lee, not of Thomas Jefferson, who was off swanning around Paris at the time.

Clinton’s enthusiasm began to wane. He was getting old. He served again as Governor and finally for two terms as Vice President of the United States. But bit by bit, he gave up the militant fight for the principles of 1776. Nearly dead, he roused himself for one last gesture, and used his VP’s deciding vote as president of the Senate to defeat the National Bank. (Unfortunately, the Bank eventually won this war, but that’s another story.) Shortly afterwards, in 1812, Clinton died in office and was buried in D.C.

Clinton was no plaster saint. He not only drank a lot, he also speculated in land—like absolutely everyone with any money in 18th century America, including T. Jefferson and even T. Paine. In a sense, bereft of its ideals, the Revolution sometimes looks to the historian like a gigantic real estate scam.

Clinton hated Ethan Allen, sad to say, and tried to prevent Vermont from breaking off from New York in 1777. He wasn’t very popular with the Iroquois, either—although Joseph Brant, the Mohawk Freemason, liked and trusted him. Clinton’s brave but amateurish defense of the Hudson Valley during the Revolution was so inept it almost failed completely. But it didn’t. He was no great intellectual, and the seven Cato Letters are not well written. But for his era Clinton was a towering figure of revolutionary purity.

Would it be too silly to call him a prophet as well? In fact the U.S. government under the Constitution turned out to be just what he and the other democratic rads predicted. Americans nowadays have good reason to know it. The patriotic rhetoric of the obscenely rich and powerful has never sounded so hollow as now. A regime founded in 1789 on counter-revolutionary reaction has finally reduced the word “democracy” to a synonym for the “Free Market Values” of greed and U.S. hegemony. America has lost its old reputation as “land of the free.”

The recent disintegration of the USSR, Yugoslavia, and the “United Kingdom” (Scotland and a part of Ireland independent, Wales on the road to devolution) has inspired many Americans with the idea of secession from the American Empire. In the next few years they foresee depression, ruin, neo-fascist tyranny, militarism, and convulsive break-up overtaking our unfortunate land. But the dissipation of the USSR was attained without much violence. Scotland freed itself without bloodshed. It could happen here.

If “Cato” Clinton were alive today there’s no doubt where his sympathies would be engaged. He’d be Populist-Progressive, intensely Green, mildly socialist, anti-Globalist, and extremely disgusted with the Money Interests and would-be aristocrats and imperialists of Washington D.C. He’d be FOR SECESSION. And he’d make a splendidly charismatic figurehead for such a movement.

Maybe we should dig him up—again. (See photo and caption.)

Despite its “conservative” reputation, the State of New York has produced some of the most revolutionary upheavals in U.S. history: the Anti-Rent War of 1845. (The latter was considered significant enough to rate a footnote to the Communist Manifesto of Marx and Engels in 1848.)

Today’s New York radicals and secessionists might at least consider a pilgrimage to the tomb of George Clinton (in Kingston’s Old Dutch Graveyard)—to meditate on our “lost history” of freedom.