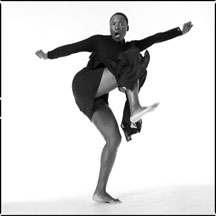 Bill T. Jones is insistent that he not be labeled an African American choreographer. Conversely, Jawole Willa Jo Zollar, with her company Urban Bush Women, creates work out of her experience as an African American woman. Both are performing works this month that complicate dominant ideals and ask larger questions about the politics of both the body and the mind.

Donna Uchizono Company, June 9–12. Donna Uchizono’s latest work, Approaching Green, is all in pink. There is a connection here between the colors. According to the promotional materials, if the human eye is exposed to a lot of pink when in natural light, a person will see green. But the real crux of this work lies in its focus on aging.

Bill T. Jones, June 16–18. It’s no secret that Jones’s works deal with complicated political, social, and cultural issues. Jones’s latest project takes him to Aaron Davis Hall in Harlem, where he will be for a two-week artist residency. Here he’ll work with audiences in open rehearsals and discussions while creating Blind Date. Like several of Jones’s works, Blind Date is multidisciplinary, using movement, theater, and text. For this work, the short story “Patriotism,” by Yukio Mishima, will be explored, and Jones will use text and dance to ask larger questions about the nature of patriotism. Leave it to Jones to use dance to question larger cultural issues that cannot always be addressed through words alone.

Urban Bush Women, June 21–26. Brooklyn-based Urban Bush Women, dedicated to dance that mines African American ancestry, body politics, and feminism, celebrates its 20th-anniversary season with a spring season at the Joyce Theater, which promises to look back, take stock of the present, and move forward. Works include artistic director Jawole Willa Jo Zollar’s 1986 Girlfriends, an examination and celebration of female friendships, and the 1995 Batty Moves, which questions dominant ideals of beauty with its focus on the buttocks (in the Caribbean, “batty” means buttocks). Zollar was influenced by Pearl Primus, a trail-blazing African American dancer, choreographer, and activist and the subject of Zollar’s new work, Walking With Pearl–Africa Diaries, a New York premiere. UBW has a commitment to community and to nurturing new choreographers like Bridget L. Moore, whose Sacred Vessel is also part of the program.

Eiko & Koma, June 23–26. Eiko and Koma, known for meditative, site-specific works, will bring Death Poem (2004) to Danspace Project for the City/Dans series. The husband-and-wife team derives their movement vocabulary and style from Japanese Noh plays; stillness and slowness are a constant presence. In Death Poem, fine netting is draped over a bed as Koma writhes and moves. Eiko stands as a ghostly, hovering figure in the background.

Experimental artist Bill Shannon is the subject of CRUTCH, a new documentary chronicling 20 years of his career as a street performer, skater, b-boy, and more. Shannon speaks with Nicole Loeffler-Gladstone about the documentary process, his performance strategies, and representations of physical disability.

Jones’s paintings are painstaking explorations of the disjunction between the world as it comes to us through our senses—the information we consume during our waking hours—and the world of our interiority—memories, imaginings, and reflections.

Drawings like those made by Jones, though accepted into the canon, remain at odds with what is generally thought of as “art” as a result of their sincerity and independence. It seems to me that this type of work, which arises out of the necessity of existential conditions, has the potential to collapse the often-arbitrary division between art and life.