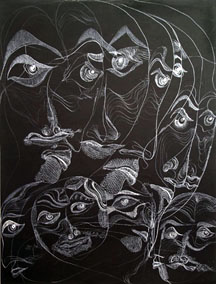 Both insane and suicidal, Unica Zürn stands indubitably as a bad role model for any subsequent artist. Still, I see in her work a better picture: the high risks and rewards of an uncurbed passion for nearly impossible art. Easy to say, now we know that surrealism was a fool’s errand, naively misguided right from Jump Street. What Zürn’s writing and drawing insist on instead is that its reckless revolutionary/revelatory wager won through, made dreams come true, if in only a glimpse, and just for one day.

She did not know how to live. Some of us prefer to fall; she threw herself away. Born in Berlin in 1916, she met Hans Bellmer at the opening of a show of his work there in 1953, and in 1970 she jumped to her death from the balcony of the Paris apartment where they had lived in abject poverty for seventeen years. Her liaison with Henri Michaux, who was experimenting with psychotropic drugs throughout that period, is said to have precipitated a derangement in her, which only worsened: several drawings in this exhibition were executed by Zürn while she was hospitalized for dementia at Saint Anne’s. I don’t suggest that one psychiatric hospital spawned surrealism, as if it were its incubator or hotbed, but both André Breton and Louis Aragon interned earlier as medical students at Saint Anne’s.

In 1954, Zürn published Hexentexte (Witches’ Writings), a book of drawings and anagrams. Irrevocably convinced of the significance in coincidence, she believed Henri Michaux to be a figure of fate, as his initials, H. M., matched those of Herman Melville, whose Moby Dick she was reading when she met Michaux.

Once we are made aware of the severity of her disorder, however, any fancy cannot dispel for us Zürn’s morbid predilections and macabre fixations. Bellmer was sexually sinister, if not sadistic. The show includes a single photo by Bellmer: Zürn, naked and tied. They are buried together in Père Lachaise Cemetery under a flat, flawless, full-length marble noir slab. Along with Michaux, who drew and wrote when he was high, these three surely blacken a corner marked, “Surrealism’s dark side.”

Her father, a cavalry officer stationed in Africa, sent eerie indigenous artifacts to Unica as a child—spotted masks, tattooed hands. We see a Medusa jellyfish, orchids, evaded garlands, and reticulate eyes. Her drawings suggest everything from the distracted doodling in junior high school girls’ secretive three-ring binders to the drawings of Louise Bourgeois. While recalling the sketchy etchings of Ian Hugo, who illustrated novels by Anaïs Nin, the fine-ribbed insecurity of Zürn’s filigree is not alien even to the recent fish-spine cut-paper reliefs exquisitely fashioned by Ellen Gallagher.

The surrealist ideal no longer pertains. It has become an avant-garde effect wholly appropriated by advertising and design. Alas! A world that never was has passed away. Confession is out of fashion. We are not comfortable lately with work this unflinchingly personal. These visions weren’t made for show—or tell. The content here is so stylized that the unconscious informs the voiceless marks of the hand.

Also displayed are an unprecedented grouping of 72 drawings and a facsimile edition of one of Zürn’s books, handwritten and illustrated by her. Let there be light. A must-see is the photograph of an adult Unica replete in a toy Plains Indian feathered headdress, set into one of her books, also available at Ubu.

“Like someone on the brink of drowning, she looks for a spot in the room onto which she can hold fast.” It is as if Unica Zürn had reached hysterically up or out to fairy tales, to illusion in her delusion, hoping to draw some succor into her “house of illnesses” (the English title of her book Das Haus der Krankheiten), bringing peace to a domain of pain. Committed in every sense, art was her only angel. She never looked away. In Zürn’s final book, The Man of Jasmine, fusing Michaux with her madness and childhood phantoms, she wrote, “Since yesterday I know why I am writing this book, it is in order to remain ill longer than is proper, I can slip in a fresh page every day.”

Robbins’ contributions and choreography in the original versions will forever be treasured, but De Keersmaeker has provided powerful, contemporary new dances that shine.

John Willenbecher: Works from the 1960s

John Willenbecher’s work is an art of anticipation. His precise forms anticipate the seriousness of Minimalism, while his paradoxically playful objects beg to be handled, a quashed call to participation impossibly choreographed behind glass.

Working within the boundaries of the melodrama and the woman’s film (josei-eiga), Tanaka focused on women’s experiences, carving out spaces of female subjectivity within the male-dominated industry. Her decision to direct grew out of her passion for cinema as well as the new opportunities for women made possible by postwar gender reforms.