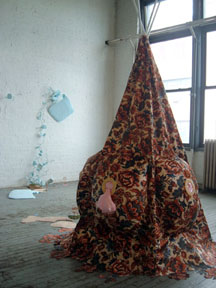 Andrea Loefke, “One Early Morning When the Campfire Was Still Smouldering...”, detail.

Part of the inaugural Project Diversity series, Under the Rainbow presents the diverse works of fourteen artists selected from over 1,000 entries for the broader show, which includes 200 artists at seventeen spaces across Brooklyn. Tastes Like Chicken, an artist-run space in East Williamsburg, was chosen to house the larger works in the show. The resulting exhibition is a series of paired formal investigations that create stark contrasts and interesting parallels.

Andrea Löfke’s “One early morning when the campfire was still smouldering...” is one of the most ambitious works in the show. Löfke’s centerpiece is a pregnant, teepeelike structure covered in patterned fabric, which links three small sculptural vignettes. The smaller works, including a foam campfire and cotton-ball clouds, illuminate a surreal, cartoonish narrative reminiscent of Chris Johanson’s early installations. Löfke’s work blends ornament and nature with a playful sense of humor that suggests a kind of benign colonization of the gallery space. The emphasis on craft and narrative contrasts with Meridith Pingree’s multimedia sculpture, which seems to take off from Renaissance ideas of flight. The interactive work is composed of skeletal wooden wings and jars of water suspended over an exposed speaker. The laden wings are activated when the viewer steps on a grid of green squares and the speaker emits a sonorous bass note. The quirky interaction is startling, despite the obvious signs that something is going to happen. The two works share a rather anthropomorphic suggestion of living systems, but they represent two recent strains of contemporary sculpture. While Löfke is closer to West Coast–style comic narrative, Pingree seems to grow out of the DIY practice of artists like Tim Hawkinson.

With their roots in older aesthetic movements, both works suggest the temporal nature of artistic practice. McDonald and Hoffman are working out of languages that seem somewhat dated. By contrast, Löfke and Pingree represent recent trends in art, such as the use of common materials and ornament. That the rest of the show operates in a similar manner is a something of a history lesson and a political reminder that artists are still working through the formalism engendered by modernism, either sincerely or with postmodern interventions. Eric Pesso’s “Untitled” is an interlocking web of wooden tendrils that feels resolutely modern from its perfect craftsmanship to its traditional base. Situated near its base is James Huang’s “Dark Slurpee,” which inverts Pesso’s overt formalism. Black wax Slurpee cups, pop cultural artifacts, sit atop a wax base in a wooden drawer. The unorthodox base consists of wooden ovals that rise topographically from the gallery floor.

The curatorial premise of Under the Rainbow seems to have been to represent the diverse practices in contemporary sculpture across the continuum of modern and postmodern art. Hoffman’s other sculpture, “Fertile Ground #16,” is positioned next to Noah Loesburg’s wax-and-cardboard wall sculpture “Modular Bracket.” Loesburg’s geometric armature plays off minimalism’s use of heavy materials next to Hoffman’s raglike figure. There is a sense that the contentious arrangements of the works were meant to invoke a discussion about the trajectory of contemporary art. Highly polished works like Jim Osman’s “3 Light Window” seem to face down works like Susan Spencer Crowe’s willowy “Underneath the Ruffles,” a brilliantly hued organism that looks like it grew out of Monet’s garden.

The divergent use of craft and materials creates an interesting mix of styles, but the show lacks a substantive, conceptual vision to bring the topsy-turvy playfulness together. Everything in the show is relatively benign, including Yoshiko Kanai’s “Sea of People,” a plaster basin filled with fish and water that sits beneath an array of plaster jets strung on wire across the gallery. The political implications of the work, with its doomed feeder fish beneath the streaking military jets, make it one of the few in the show that have much critical content. Noah Baen’s “Uncounted Ballots,” a series of photographs of wire-and-paper sculptures and a site-specific sculpture, tries to imbue an aesthetic similar to Hoffman’s with political meaning, but it feels forced. It is a heavy-handed effort at investing formalism with political meaning.

The show is a relatively good collection of works by individual artists that are certainly diverse, but it seems to be missing a critical edge to highlight the necessity of the show itself. As an opportunity for underrepresented artists to exhibit, it succeeds admirably. As an exhibition of objects without external concerns such as race, gender, neighborhood, or age, the show does not help the works to transcend their own formal boundaries. There are a lot of reminders in the show of where art has been, but few works signal where it could go. It’s strange that so many artists would choose to work in the deeply rigid and codified language of modernist formalism, which grew out of a paternal Western history of art.

An orange creamsicle-colored carpet lures visitors to Vito Schnabel Gallery into another realm—that of Unweave a Rainbow, LA-based artist Ariana Papademetropoulos’s current exhibition on view at the gallery’s New York space. The plush room is sensual and juvenescent, complete with six paintings and two modular sculptures of rainbow-hued velvet cushions placed on the floor to be utilized and rearranged.

Little Dog at the End of the Rainbow

Luisa Rabbia: From Mitosis to Rainbow

Brooklyn-based artist Luisa Rabbia is showing nine new paintings in her fourth solo show at Peter Blum Gallery. The Turin-born Rabbia has worked in multiple media, but this display concentrates on canvases covered by a combination of materials: colored pencil, pastel, acrylic, and oil.