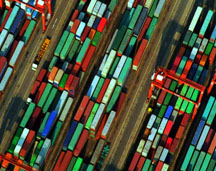 Laurent Grasso Radio Ghost, 2004
DVD projection with sound, 30 minutes
Courtesy of the artist and Galerie Chez Valentin, Paris, with the support of agnès b.

We may have waded through our fair share of new British art since the Sensation show of 1999, but ambitious surveys of little-known continental artists are still hard to come by. And so when OK/OKAY: Recent Art From Europe opened on both floors of NYU’s Grey Art Gallery as well as the Swiss Institute’s Contemporary Art space, featuring large-scale works by 14 artists from nine countries, it had the indications of a major event. Given the influence that past transatlantic waves (art brut, arte povera, neo-expressionism) have exerted on the post-WWII Modernist dialogue, it’s hard to tamp down the hope of discovering a new band of enfant terribles to rattle the art world’s cage, or, if that’s too quixotic, at least a fresh take on our shared aesthetic lineage.

But not this time. OK/OKAY shrinks from the politically engaged, historically informed innovations forged by the best postwar European art, preferring to construct a rickety neo-conceptualist framework on the shifting sands of cultural relativism. According to the show’s press release, the curator, Marc-Olivier Wahler, who is also the Swiss Institute’s artistic director, has seized upon the indeterminate etymology of the word okay (the exhibition’s website lists seventeen possible origins) to illustrate the “blurring and movement between meanings, where information that might seem obvious reveals itself as much more ambiguous and subtle.”

Not to be impertinent, but isn’t that what art is? OK/OKAY, the press release continues, “will bring to light the slippage of meaning and translation that shakes up our interpretive system.” Slippage is an interesting word, since it means both the act of slipping from a secure place, which is apparently the curator’s point, as well as a decline in performance or achievement.

The clearest example of the curator’s thesis is an installation by Ben Woodeson entitled “Variable North.” Electromagnets scattered around the gallery disrupt the local magnetic field. If you pick up a compass (provided), the needle won’t indicate true north but rather a position relative to the magnets. Get it? A more clever, if fairly literal, treatment of slippage can be found in Graham Gussin’s dual video projections, simultaneously zooming in and out (actually the same clip played forward and backward) of various locales. The presentation, however, is self-defeating. The images are projected on opposite walls rather than the side-by-side installation pictured on the exhibition’s Web site. What could have been a dizzying, even cathartic experience as the images pushed in, pulled out, and fleetingly matched becomes a disjointed exercise in head twisting.

Gender lines are blurred in Jean-Luc Verna’s old-hat photographs of a frontal male nude in spike heels against a white backdrop. While the wall text admits a debt to Helmut Newton, it could just as easily have mentioned Robert Mapplethorpe, Richard Avedon, or Jack Smith. More slippery than sex, and far more volatile, is cultural imperialism, and the two works representative of Europe’s centuries-long rape of its colonies are so pallid that they blur into offensiveness. Valentin Carron offers leather pelts emblazoned with mock Légers in a trifling reversal of early modernism’s co-optation of African and Oceanian art. And for the installation entitled “The Collector of Art (Somewhere in Africa there is a great black man collecting art from Europe and America, buying his Picasso for 23 coconuts…),” Nedko Solakov has constructed a timber hut tricked out with artworks from the Grey’s collection. Handwritten notes on cardboard scraps describe the fictional collector’s thoughts on each piece as well as the number of coconuts, stones, or bones he paid for it. While the installation is obviously meant to discomfit Western viewers with the prospect of our own cultural treasures carted off for a song, the artist’s loose grasp of irony quickly slips into condescension. How does this modest collection compare to the shiploads of booty that King Leopold, for one, expropriated from the Congo? And the African collector’s appreciation of his art, while politically correct, actually works against the idea of the piece. Buying a Picasso for coconuts doesn’t devalue it or demean the culture it comes from, unless you think of art strictly in monetary terms. To create a closer parallel to a colonial mindset, the Picasso should have been used as a doormat.

The other works in the show—Christian Andersson’s magic realist light works, Gabriele Di Matteo’s ambitious but jokey history paintings, Leopold Kessler’s neo-Dada appliances, among others—hew more or less to the curator’s relativistic playbook. Some are intriguing, others simply inert. The piece with the blurriest connection to the show’s theme, Laurent Grasso’s video “Radio Ghost,” also seems to be the only one shooting for some level of transcendence—murky voices recounting real-life ghost stories as the camera floats high above sunlit cities, truckyards, forests, and harbors. It doesn’t quite reach the sublime, but it’s okay.

Radicalism in the Wilderness: Japanese Artists in the Global 1960s

Radicalism thinks through this dialectic within Japan itself and on an international scale. The show features boundary-pushing artists who worked in areas remote from Tokyo—the seat of the art establishment after World War II—while proposing the terms “connection” and “resonance” to describe, respectively, concrete links and conceptual parallels with figures in Europe and the United States.