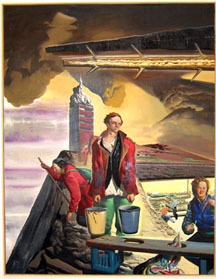 A dusty, smudged figure stands at the crest of a sheer precipice, his face strained but ardent. In the foreground is a jerry-rigged latrine, composed of a warped plank with two toilet-size holes propped on plastic milk crates. In his hands, as if to remove the sewage, the figure carries buckets. But instead of shit, a glistening glob of writhing paint snakes a peak up through one of the holes. In the distance, against a skyscape of yellow ochre clouds so heavy they could morph into stalactites, a nondescript office tower is capped with a spiky, meringue-like blob of paint. Welcome to the latest installment of Neo Rauch.

Reviewing Rauch’s last New York show, I wrote about the unique position that he occupies in current European painting. As one of the exemplars of what Marc Spiegler of Art Newspaper has termed “Post Socialist Art,” Rauch, at this point, has become the father figure to a cadre of painters. All these young artists hail from former Eastern Bloc academies and are attracting the rabid attention of both the commercial and critical art world. Last fall’s much-hyped Clara Park exhibit at Marianne Boesky Gallery showcased several alumni from the Leipzig Academy, where Rauch trained and now teaches. The exotic appeal of these painters as the “other” is in part nostalgia for those bad old days of the cold war.

Rauch continues to mature as a painter and, though still employing his trademark icons of Stalinist-era propaganda, he is now casting his imagistic net wider by including references from a broader, though perhaps still obscure, branch of German art history. Visually, the paintings have a pervasive quality of oddball, funked-up surrealism, not unlike a David Lynch movie. These cinematically composed pictures include a cast of 19th century solders in uniform, meandering functionaries, scruffy peasants and their families, and the ubiquitous artist. Narratively, all the characters appear to be absorbed in some kind of labor, some bizarre inexplicable, horrible project, the intent of which is the engine that rivets our fascination. In the above-described “Höhe” (2004) and “Pergola” (2005), Rauch has planted allegorical hints that this “horrible project” is actually the practice of painting. Whether due to the local light or a cultural attitude, gray seems an almost nationalistic preference for much of German painting. Rauch keys his palette in gray, using it as a device to model form, affect mood, and express a sense of decrepitude that permeates the imagery. He renders dreamlike scenes in which a curtain edge or a door opens onto vistas vast as a Casper David Friedrich landscape, but with an atmosphere of permanent fear, a hangover from a youth spent behind the Iron Curtain.

Architectural vignettes like hand railings, support beams, or pluming pipes demarcate space and create compositional vectors that divide inside from outside, aboveground from underground. In “Neujahr” (2005), a sled baring a large jug spewing a rope-thick glob of thalo-green paint is pulled through a snowy courtyard. The puller with cocked hat, waistcoat, and knee pants could have escaped from a painting by Spitzweg. Behind him another figure bends as he feeds a stove or kiln. Rauch is a skilled draftsman; and his handling of paint seems intentionally wan, as if hurried, or perhaps like the socialist laborer’s joke “We pretend to work, they pretend to pay us,” a protest through slipshod production. The artist’s dilemma is never far from center stage in these works. Whether it’s a pinheaded painter working at his easel, slaves toiling in a pigment mine, or palettes shaped like display cards from which tourists might buy souvenir pins, weird allusions to the physical materials and the tools of the painter’s trade are everywhere.

Is James Kalm's designation of “Post Socialist Art” really that different from other categories of figurative painting from the recent past? During the 1980s the “Anachronistici” of Carlo Maria Mariani or Gérard Garouste painted in stylistic simulations of the classical and mannerist. For Rauch and his followers, there is an implied notion of using the system to subvert the system, of tweaking the socialist status quo, using the techniques of the academy to critique the academy. We can only ponder the problems faced by a creative artist working in a planned society, especially one who played the system well enough to arrive at the upper levels of the educational bureaucracy, someone with Dadaist subversion in his heart, like a Neo Rauch.

The 83rd, Figure of Noise

While perhaps telling, The 83rd's coded use of “culture” is just as instructive as his near-militant posture of independence. As the founder of the multi-pronged media organization Sermon 3 Recordings, through which he self-releases his music via Bandcamp, The 83rd’s sui generis trajectory seeks the kind of valanced heat that the real and art worlds seem to so rarely offer to self-styled enfants terrible.