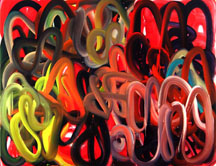 Karin Davie’s recent paintings consist of dense layers of profoundly sustained, boldly colored brushstrokes that loop and bend across the canvas. Tones frequently build intensity upwards from the layers beneath. The intertwining of strong and mild tones develops the paintings’ tension. To contrast the more severe juxtapositions between individual brushstrokes next to and on top of one another, across the breadth of a single sinewy brushstroke, are subtle fluctuations among colors. Owing to the artist’s gift for building up paints on her especially wide brush, the meandering paths reveal highlights at the edges, especially when performing a sharp turn. What results are splendid illusions of appreciable volume that suggest objects in space. Her colors can be vivid, but also dull. Undeterred by garish results, she paints with numerous colors that at first couldn’t seem carefully selected; but before long, sensuous harmonies begin to surface, along with hints of her intriguing sensibility. Ultimately, the paintings’ rich structure seems impossible without the intense colors that characterize the artist’s distinctive palette.

These paintings are carefully crafted. The artist’s earlier canvases followed a procedure, rather strict in comparison to her new work; and though these new paintings are markedly wilder, procedure and a measure of formal rigor have been retained. But it’s dangerous to confuse formal rigor with compositional perfectionism—that is ostensibly undesirable in Davie’s work. No better evidence of this exists than the scattered drips of paint found across the canvases. These splatters essentially consist of two varieties: There are drips, which appear to have fallen from an overly stocked brush abruptly having come to a stop; There are splashes, which normally occur at hairpin turns of the brush. The speed of the brush and its fulsome draw of paint can’t hold every drop, and there are some spills onto the canvas beyond the edge of the stroke, as if the channel created could not accommodate the generous flow of paint. Though both of these invited accidents are evidence of the picture plane, the mere drip of paint seems more interruptive of the otherwise eloquently fashioned strokes. Nonetheless, the honesty of these flinches in process reinvest a measure of humanism in what could otherwise read as computer-generated patterns.

How Davie conceives of space is an interesting question. In her paintings, it’s ambiguous whether she pictures space folded in on itself, as if she is trying to capture the afterimage of crumpled yet curvaceous planes whose perimeters are outlined in brilliant colors. Accompanying the paintings are a series of “drawings,” that might provide the key to her mode of thinking. Paper that has been painted bright solid colors on one side and slit to incorporate open zippers is rolled into rounded bunches along with strips of mirrored Mylar. From the assertion that these evidently sculptural objects are drawings, we might surmise they serve a preparatory function; the solutions they reveal become the underpinnings of the artist’s paintings. Davie’s conceptual method begins with flat planes, and her imaginative process imposes the contortion and compression. If her sculptural drawing invokes John Chamberlain, as the catalogue essay indicates, then her painting draws on the compressions of César, after having been modified by her penchant for sweeping, rounded form. César discovered the taut potential energy of cubed scrap metal; Davie seeks that same kind of energy in the serpentine structure that sustains her paintings.

Davie’s work wavers between color and structure. As beholders we look beyond the often wondrous, always daring symphonies of color to discern and appreciate the quieter subtleties of form and contour. But why? If the legacy of the Venetians is any judge, it is color that captivates. In other words, though we may cling to that which satisfies our cerebral appetites today, in time we will return to what immediately gratifies the eye. In Davie’s work it is the sustenance we find in even a single brushstroke that captivates our gaze.