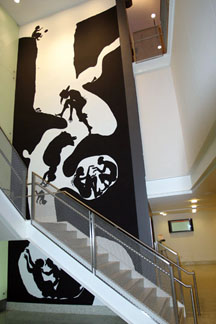 Kara Walker’s new mural, commissioned by the New School and installed at 55 West 13th Street, does just that. Unfurling along the grand staircase, almost like a hanging Asian scroll, it is perfectly suited to the liminal space that adjoins lobby to mezzanine, like the threshold of the horizon connecting land to sky. But “Event Horizon” is really not a horizon at all. Rather, it is a vertiginous chute, a radical departure from the traditional horizontality of visual narrative. Physically, it is a challenging work to view. Depending on our vantage point, it either forces us to crane our necks or to look down precariously as we meander down the staircase. Either way, it stops us in our tracks.

“Event Horizon,” as with all of Walker’s works, engages our full participation. It invites us to peer closer to uncover its more sinister meanings, the delicacy of the cutout paper contrasting with the brutality of the vignettes. To our horror, the clumps of blackness are not plants but dismembered hands and a severed foot. Are these the ghastly remains of a slave who tried, unsuccessfully, to escape his bondage? And those figures floating—they are not the gaily flying figures of Chagall: the man is letting go of a woman whose shackled hands are losing their grip on a child, and they are all plunging into the abyss.

The first things we notice about the piece are the narrow passageways, which immediately suggest the Underground Railroad. They evoke journeys, both interior and historical, from purgatory to freedom. They are also unmistakably somatic, and more specifically, intestinal. Is Walker, in her typically provocative fashion, referencing the hideous stereotypes that dehumanize the racially other as a parasite or a vermin? Or are these tunnels, like rabbit holes, a comment on the abjection of 19th-century slaves, living in miserable squalor?

These dugout spaces bring to mind Kafka’s “The Burrow,” in which an unnamed creature seeks subterranean shelter, withdrawing from an unknown predator. A young couple in the mural, snug in a womblike pocket, plays patty-cake, pointing out that burrows can also provide cover for those seeking escape from the exterior gaze, allowing a retreat into the invisibility that has been demanded of the “colored” for so long.

Burrows are also sites of secrecy, where the darkest parts of our nature reside, embryonic sacs incubating the monstrous and demonic. Burrows can engender blindness, as in the moles that never see the light of day, living and dying in a circumscribed existence, their vision eclipsed. Burrow dwellers, living above and below, lead a double life—like the double consciousness of people of color, who live both out in the world and under the perceived difference of their skin. And burrows, like anthills, can be mysterious traces: the fragile and forlorn artifacts that a displaced race leaves behind, the silenced tales swallowed up in the sediment of official histories.

Gazing upon a Walker mural elicits the frisson of delight and the visceral shock of witnessing something born of necessity, brought forth with a sense of the deepest urgency, and recalling the word’s ancient roots in ne-ked-ti, “no other way.” If she had not created those images, they would have had to be invented somehow by someone, delving into the taboo areas of our troubled American past and refashioning them with irreverent simplicity and power. Unlike the work of so many other artists, her brazenly subversive displays succeed in packing a wallop of political content without sacrificing poetic integrity. Maybe artists can’t change the world, but some of them, like Walker, can certainly buzz like gadflies in the face of power.

Walker’s work indulges us in the sheer pleasure of looking. The deceptive simplicity of her work lures us into a visually complex world, crammed with awful surprises. There is something about the cutout detail of a silhouette that beguiles the eye, at once both activating and relaxing our visual field, teasing the gaze in a way that is counter to the act of looking in this age of photographic reproduction. Her work resists the current digital aesthetic (transparency, layers, Gaussian blurs), challenging viewers with the emphatically flat, the defiantly opaque. Yet the images, for all their flatness and opacity, are incredibly alive and animated, expressive in a way that many works of “moving images” are not. Confronting her signature images, starkly rendered in black and white, the only gray area that exists is in our minds, in the murky zone of personal and collective memory.

“Event Horizon” is a wonderful counterpoint to the strident bands of color of the opposing Sol LeWitt mural. It’s a sly curatorial move that, as an Asian American woman, makes me smile: a white man and black woman coexisting in a potentially contested space. By means of Art, Walker has carved out a small but significant corner and, for this moment, triumphs over History.

Weimer is a contributing writer for the Brooklyn Rail.

A group of white sculptures sit atop glistening aluminum pedestals. To the right, two TV screens flash images of dancers, ritual objects, and footage from a post-war game show. An adjacent wall has been painted green to mimic the palette of a natural history museum and bears a single photograph.

Arakawa: Diagrams for the Imagination

Important to so many poets and thinkers and theorists, this brilliant Japanese erstwhile neo-Dada painter and thought-provoker has to be read (seen, but more fittingly, read) with enough leisure to have the visual-verbal complications, as beautiful as they are diagrammatic, permeate your imagination.

Mary Mattingly’s recent photographs in Pipelines and Permafrost stitch together a story of geologic deep time for the imagination. The New York-based artist has always woven ecological concerns into her public works and photography practice, committed to helping audiences question how the land and water resources as well as the products and presumptions of our lives came to be.