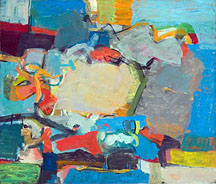 The current show of paintings and drawings by Charles Cajori should be an eye-opener for painters enraptured by our amnesiac art world. A founding member of the Tanager Gallery and intimate associate of the 10th Street School, Charles Cajori has had an extraordinary career steeped in the history of 20th century art. He has been lauded by historian-critics Dore Ashton and Irving Sandler and painter-critic Fairfield Porter. More recently, he has received favorable critiques from Ken Johnson in the Times and Mario Naves in the Observer. But it is Cajori’s painting, in which he grapples with Cézanne and de Kooning, that most clearly demonstrates his connection to the history of his discipline.

When Cézanne said that he wanted to make something solid out of impressionism, I imagine he meant something like what Cajori’s up to. Cézanne’s solid planes of color insist on the surface of the painting as a flat field against which the painter acts. This sensation is much stronger with Cézanne than with the impressionists, and so it is with Cajori. Unlike later artists championed by Clement Greenberg, Cézanne stuck with his representational motifs—figures and landscapes. Again, Cajori follows suit. In the most mystifying of his paintings on display at David Findlay Jr., aptly called “Interspace” (1955), Cajori melds the space of a portrait with that of a landscape. In it, a central swath of ochre evokes a portrait head while the surrounding sea of twined colors and the painting’s horizontal structure suggest landscape.

Cajori’s confounding of these motifs and simultaneous flattening of pictorial space suggests a reexamination of Cézanne in light of de Kooning, to whom Cajori’s brushwork owes an obvious debt. Cajori seems to pit these two masters against one another to seek a common ground as a base for his own work. This technique of working in response to masters, common to painters as far back as Giotto, is an indication of the esteem in which Cajori holds his tradition.

Cajori is always in the act of observing, most recently in his series of figures from the 1990s. They’re loosely painted moments of indolence in the landscape that reveal how drawing underpins all of Cajori’s work. It is not simply that he has learned to draw well and can expertly render his subjects, although this is certainly true. It is that drawing from life—bodily movement in response to direct observation—inspires his entire enterprise. Cajori uses his body to animate his paintings. His brush work is fast. A daub of paint stands in for the lawn, and quick hatching defines figures’ interlocking limbs. Surfaces are active, one gesture giving way to another. Looking at these paintings, one paints along with Cajori, following his brisk decisions and movements as he completes his work.

Charles Cajori might seem difficult to grasp to a contemporary sensibility. His attitude toward tradition is a far cry from the novelty show into which the contemporary art world too often degenerates. Cajori found his style before Greenberg’s pronouncements on the dos and don’ts of painting gained sway, and even longer before these same pronouncements became the object of scorn for contemporary tongue-in-cheek painters. A long career can sometimes be an obstacle to reaching viewers. Better to burn out than to fade away. Or is it? Without the sense of individual struggle with history and lineage that Cajori’s art exemplifies, painting has little to offer beyond decorative flair.