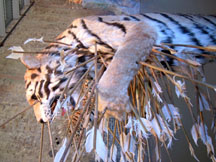 It’s ironic that a Chinese artist should make one of the more important political statements about the convergence of devastation, celebration, and heroism in the midst of an American war on terror. The physical devastation of the conflicts in Iraq and Afghanistan has become a common sight: collapsed buildings, twisted wreckage, and maimed bodies. Heroism, though, has become less clear, becoming dependent on the narrative reconstruction of events. One side’s terrorist is the other’s martyr, and terrible accidents can be conveyed as acts of heroism through the media. Cai Guo-Qiang’s new cycle of related works about conflict at MASS MoCA hovers between spectacular violence and the spectacle of its representation.

Cai’s previous use of fireworks as a medium seemed to be less about referencing violence than reclaiming the traditional act from the lexicon of terrorism. Through three large installations he moves away from reaffirming the celebratory nature of fireworks toward a political critique of war and violence. Heroism and its celebration, often with fireworks in memoriam in America, reaffirm the nobility of sacrifice and killing. War memorials are often beautiful if not solemn reminders of the scope of the sacrifice and the tragedy. Cai brings the subject into question with his sculptural installation “Inopportune: Stage Two,” a darkly comic retelling of an old Chinese myth.

The installation is a series of leaping and twisting tigers pierced with hundreds of bamboo arrows. The original myth about a bandit saving a village from man-eating tigers celebrates the virtues of bravery and heroism, yet Cai’s scene is one of agony and rage, as the tiger’s features are comically exaggerated to express their pain. The room is empty save for a rock outcropping and a tree exposed in the back, as if built for the stage. As a critical framing device, this set piece places the violence at a remove in a way that does not reify the original myth but forces the viewer to empathize with the tigers. The heroic figure remains offstage, and all the audience is left to witness is the slaughter.

Outside the gallery with Cai’s scene of mythic violence is a traditional Chinese scroll painting of a hundred tigers lolling in a marsh, painted by his father. Lacking any conflict, the animals are shown peacefully in contrast with the raging beasts in Cai’s narrative. The difference in the representation of the tigers makes their destruction in the installation even more distressing. Together, the two works create a compelling inversion of the traditional heroic myth celebrating violence and destruction.

The implications of the scene resonate with Cai’s monumental installation “Inopportune: Stage One,” a sequence of white Ford Tauruses flung through MASS MoCA’s football-field-size gallery. Packed inside the cars are bomblike machines that burst with thin rods of Chinese fireworks, whose light arcs out into the space. The cycles and patterns of light are beautiful in contrast with the minimal forms of the cars. Each of them functions like a photographic freeze-frame of a bomb that erupts and sends the car flying into the air until it lands safely at the far end of the long gallery. While the stylized explosions are beautiful and celebratory, the violent force of a car bomb is visualized through the trajectory of the car. The installation, with its beautiful strands of light and its demonstration of violent power, is something of an explosion of conscience for the artist. The beauty of fireworks, and their association with gunpowder and war, is tied to the devastation caused by bombs.

Celebration always follows the devastation of war. Buried beneath the rhetoric of national and cultural pride is the horror that the explosions symbolically represent. Cai’s third installation, “Projection,” is a 9 × 35 foot video of a car bursting with fireworks as it travels through Times Square. The two spectacles, superimposed over each other, create a lyrical contrast between traditional Chinese celebration and the American celebration of materialism. Cai’s “car bomb” of fireworks reads like a symbolic protest, however, rather than a threat of violence. It is too beautiful to suggest real devastation.

The scarred remains of the Taurus used in the video are positioned discreetly behind the vast screen. The Taurus used to shoot the video is presented postexplosion. The car is filled with the burnt casings and shells and is far more disturbing than the video or the series of cars. The relationship between the illusion of the video and the reality of the car cuts close to the nature of Cai’s criticism of violence. He employs the fireworks not only in celebration or as a reaffirmation of beliefs but as a medium that can capture the complexities of war and its aftermath. Through a combination of spectacle and violence, the show is both beautiful and harrowing. In a way, the artist seems to be filtering his experience of the war and the threat of terrorism through his own cultural experience and vocabulary in a way that can convey the complexity of his beliefs. Violence, it seems, should not be perpetuated, but it remains a powerful force in the cyclical nature of life, celebrating what it destroys and destroying what it celebrates. The contradiction makes a fitting statement of understanding and perspective in a period where politics are marked by myopic absolutism.

One of the most prominent Chinese artists of the past two decades, Cai Guo-Qiang makes work that delves into the folkloric precursors to China’s technocratic state, even as he regularly works with that state on his grandest projects.