Ron Gorchov is from a generation of painters singled out by Barbara Rose as passionately committed to painting as a transcendental art. This group includes some, such as Bill Jensen, Elizabeth Murray, and Robert Moskovitz, whose names have become common currency in the art world. It also includes others who’ve been quieter in recent years. Gorchov belongs to this latter group, and it’s great to see his work out there again.

It’s easy to see how Gorchov garnered attention in the 1970s. His work from that era at Vito Schnabel is overawing, some of the most ambitious painting I’ve seen. Gorchov builds concave stretchers on jointed supports over which the canvas is stretched tight as a drum, stapled at the edges. In two pieces from the 1970s, “Set” and “Entrance,” Gorchov assembles these monochromatic surfaces into massive painting-sculptures. From the back they’re all heavy woodwork, brackets, and pulleys strung to the wall. From that angle, all that old wood, canvas, and rigging makes them look like old schooners. From the front, they’re curved, cantilevered planes of color, one hovering just above the next. 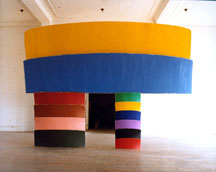 For my money, the more exciting of the two is “Entrance,” which Gorchov began in 1972 and finished just this year. It is huge, 15 feet tall and 20 feet long, a portal built of small paintings to a height of roughly 6 feet and topped with a massive double capital of yellow and blue. It’s shaped roughly like a pistol, with the door as the trigger. You can literally walk through the painting. The painted surfaces are matte, brushy, and a bit messy, all qualities very natural to lean oil painting. Their curve, however, gives them an indeterminate edge, just like sculpture. It looks like nothing I’ve ever seen. I would have thought that a thing, finally, would have to be a painting or a sculpture. But “Entrance” is both. Meant to be experienced, it is hard to take in, harder still to describe.

It is tempting to theorize Gorchov’s art as a deconstruction of painting—something along the lines of the Support/Surface group. In many of his smaller works, Gorchov paints several forms on a monochrome ground. Their shape mirrors the unique form of the supports. One might say that such a technique takes aim at allusion in painting, that it gives the lie to any content other than structure. Such an approach is tempting, but false. As Barbara Rose wrote of Gorchov and his fellows, “All are equally committed to a distinctively humanistic art that defines itself in opposition to the a priori and the mechanical: a machine cannot do it, a computer cannot reproduce it, another artist cannot execute it.” Standing before Gorchov’s work, it becomes clear that his formal innovations are emotion-driven, a conduit for humanistic content. His painted forms seem somehow primitive and at times angry. They’re often red, which makes me think of incisions, a sensation reinforced—not undermined—by the structure of the supports. As Barbara Rose continued, “Artists like…Ron Gorchov, who alter the shape of the stretcher somewhat, do so not to identify their paintings as virtual objects, but to amplify the meaning of imagery.”

Since Gorchov’s most effective canvases tend to target the solar plexus of the viewer, the scale of each becomes significant. The closer the scale of his paintings to a torso, the more bodily tension they tend to exert.

Barbara Hammer: Tell me there is a lesbian forever…

Centered in the gallery rests a motorcycle, a relic of someone whose absence has been palpable since she left the realm of the living in 2019. Barbara Hammer is the subject of a museum-quality show, albeit in a gallery, curated by Tiona Nekkia McClodden.

Art Historian Barbara Rose talks with Heather Hutchison about her work, the Umbrian landscape, and how natural phenomena inspire her compositions.