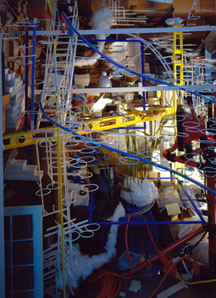 The world is now largely artificial, at least for those of us living in affluent capitalist countries held together by an intricate web of systems and subsystems. Buildings, highways, airports, sewers, water lines, telephone lines, the Internet, television, cell phones, satellites, even the pharmaceuticals that keep an alarming portion of our society more or less functioning—all require a lot of other, smaller things to be invented, designed, marketed, and manufactured: the wires, pipes, transmitters, receivers, screens, keyboards, pills, vials that hold everything together. All of these and more have the apparent transparency and naturalness of what Edmund Husserl called the “life world,” part of the phenomenology of everyday life. Yet most of us know little of these systems and accumulating things, which are constantly being maintained, discarded, and replaced. We are scarcely aware of them except when, for instance, a whole swath of the power grid crashes, subways halt mid-tunnel, computers and lights go down.

Perhaps one of the reasons Marcel Duchamp perversely argued that even paintings are readymades (because the paints with which they are made are as prefabricated as a urinal) was because he anticipated the fact that the 21st century is subject to what Vilém Flusser called “total design.” This is not just a feature of massive things like skyscrapers and jumbo jets and surveillance satellites, but equally of mundane things like bottles of water, tacks, clothespins, and even the flowers planted in the center divider on Park Avenue—scale is not the crucial issue. To map the history of the most trivial knickknack would most likely require lines zigzagging across continents between factories, phone connections, and couriers. It is important that Duchamp never really rejected the vocabulary of the painting tradition—that is obvious from works like the “Large Glass” and “Etants Donnés”—but rather the ideas of creativity and perception through which those traditions came to be understood.

A number of contemporary artists, notably Tara Donovan, Tom Friedman, and Jason Rhoades, have used the accumulating material and detritus of contemporary life to make art: adding machine paper, toothpicks, sugar cubes, gum, lightbulbs. But no one has balanced the relationship between found materials and the vaulting lyricism of a painting tradition that culminated in the abstract work of Jean Miró and Arshile Gorky as effectively as Sarah Sze. This was initially made clear to New York audiences in Sze’s dazzling installation at the 2000 Whitney Biennial, in which a structure fashioned from wire, string, plastic tubes, aluminum ladders, and plants with their own irrigation systems spiraled and swooped up to the museum’s skylight.

A recipient of a 2003 MacArthur Fellowship, at thirty-six Sarah Sze is one of the most celebrated artists of her generation, and deservedly so. The great appeal of her work rests in her ability to marshal a staggering clutter of familiar objects into whirling, lyrical sculptures that are at once rigorous, intuitive, and metaphorically resonant. Whereas an artist like Donovan is largely interested in the physical properties of her material—one of her recent pieces involved sheets of safety glass stacked one on top of the other so they began to crumble under their own weight—Sze uses her objects to fashion morphing, parallel universes. They are endlessly allusive, yet swept up into a larger force field. To look at Sze’s work is to have one’s eyes and mind and even body in constant motion, traveling through its networks.

In her “The Triple Point of Water” (the title refers to a state in which water can take either a liquid, solid, or gaseous form) in the submerged sculpture garden at the Whitney Museum in 2003, Sze erected a scaffold of PVC pipes tethered to the building’s imposing poured concrete walls with rope-size lengths of orange yarn on which she built a whimsical ecosystem of Styrofoam cut to look like geological strata, oozing mosslike green foam, plastic flowers, real plants, fish tanks, and beautiful blue glass bottles. The magic of “The Triple Point of Water” was its delicate balance, its fragile equilibrium, as though by shifting a single element the entire stressed, bowing structure might collapse. Sze’s art is by nature ephemeral—with few exceptions, her works are disassembled at the end of an exhibition’s run—but pieces like “The Triple Point of Water” are ephemeral in a deeper sense. They are fantasies, waking dreams that can be sustained only so long; their legion elements seem destined to implode back into the meaningless clutter of everyday life.

Walking into the front room of what is Sarah Sze’s second solo gallery exhibition in New York at the Marianne Boesky Gallery, dimly lit by the few lights set on the floor of the installation itself, the first thing one notices is the orange string steeply descending from high on one wall to the opposite corner. Suspended on it are rickety, tilted white constructions entwined with plant forms, their roots dangling; they look like scale models of skyscrapers in a dead city. On the floor are formations of tubes, upended tacks, blue string quivering in the breeze from a fan, paint stains, and cones of powder. Since the lighting is low and focused, the atmosphere in Sze’s new installation is uncharacteristically sinister—the exaggerated, pitching, blurry shadows on the wall evoke German expressionist cinema. One assumes that this melodrama is at least partly playful and ironic.

Deeper into the installation, where the string sweeps down toward a vanishing point in the far corner of the gallery (this is an exhibit rich with allusions to the optics of perspective), are scatters of tape, bags of dirt, Styrofoam cups arranged in descending order according to size, little boxes, screws, glasses of water, shoes, pills, polished stones, all of them trailing back toward a glowing corner with upended test tubes, burbling water, and humming fans. The objects on the floor are arranged with Sze’s signature fussy, compulsive aestheticism, all symmetry and correspondence. But here they have an almost melancholic, abandoned quality. The fact that what is happening in the far corner, amid the test tubes, flowers, lights, fans, and the aquarium, is concealed from the viewer and cannot be seen without literally crawling over the exhibit itself makes it vaguely demonic. Is it a hydroponic garden? A laboratory for cultivating deadly bacteria?

Sze has sawed through the back wall of the front gallery, and inside she has placed an idiosyncratic hybrid of a cabinet of curiosities and a storage locker. Corrugated cardboard boxes have been cut and glued into what look like 3-D models of plate tectonics, behind which are stacked boxes with “Fresh Direct” and random dates printed on them. Miniature spiral staircases climb the sheared strata. There are cutout paper fish skeletons, patches of tall grass, and white feathers. There is an old coffee table book open to a photograph of the pack ice in the Arctic Sea. There are rulers and endless extension cords. When one walks into the next gallery and looks through the wide, ragged gash in the opposite wall, it becomes clear that the installation burrows all the way down through the floor, cascading into the space beneath.

Unlike “The Triple Point of Water,” which is open and lighthearted, Sze’s current installation is fueled by an enigmatic, hidden, generative principle. While Sze’s deft touch is present in every cone of powder, every shiny stone suspended like a plumb line from string, every white cage, the objects, bathed in low, unnatural light, seem to be both wholly autonomous and part of an organism that is multiplying in every direction. A blue cord pierces the wall between the two galleries and curves into another construction, this one suspended from the ceiling. Paper plates have been sheared off and arranged vertically so that they look like strange fungi. There are feathers blown by little electric fans, branchings of wire with bits of colored cloth on their tips, I.V. bags full of water. White taproots hang down, wrapped in gauze, or else splay out like vines, plastered onto the walls. On the floor is a blue canvas stool with a desk lamp on top of it, its cord plugged into the wall above a cone of white powder. The string that warps and insinuates itself throughout the exhibit is finally wrapped onto metal spools near the top of the wall, and into the exposed brick outer wall, four windows have been cut. They let in light and air; they offer views of nothing.

Sze’s sculptural inventions are made out of things that for the most part retain their identities. They are made out of commodities, little commodities, things that can and were bought in vast quantities in dime stores and retail outlets, and they are clean and unused. Sometimes the packaging is included as well. These materials are decidedly not the urban detritus and thrift-shop kitsch that festoon the assemblages of artists like Joe Brainard, Bruce Connor, Robert Rauschenberg, and Lucas Samaras. Yet the myriad and proliferating things in Sze’s constructions do not assert any meaning in and of themselves; they are quirky, but also arbitrary and interchangeable. This raises the question as to whether Sze’s work is, in the end, just a dazzling formal exercise. We are accustomed to the idea that work that uses the clutter of our commodity culture, like that of Jason Rhoades, involves at least an implicit critique, and that is wholly absent from Sze’s work. There are moments when it seems as though the artist’s sheer formal facility, her decorative mania, stands in the way of a larger, more potent vision.

Lyrical, funny, unpredictable—there is something liberating about the current installation at Marianne Boesky. Our exhaustive, globalized, manufactured, packaged, marketed culture is airless and oppressive. Sze takes that culture’s weird, repetitive elements, which by now crowd both our inner and outer worlds and turns them into galaxies that are indeterminate and destabilizing. One leaves a Jason Rhodes exhibit traumatized by its raunchy, blaring aggression. Sze’s work opens a space for new permutations, new fantasies, rendering the distinction between the natural and the artificial, the singular and the reproducible, the readymade and the created irrelevant, not by some form of deconstruction but by blithely ignoring them. Perhaps we don’t need critique but rather fantasy, not as a means of escape but as a mode of freedom, a way of activating thought. I kept imagining Sze’s installation literally drilling down through the floor, through the walls, through the ceiling, until the building itself collapsed, and then continuing on across the empty lot to the next building. And all the while everything would be perfectly placed, as though part of a Japanese tea ceremony; even the apocalypse would be carefully color coordinated.

Sarah Sze beguiles us with two new spectacularly wrought installations teeming with meticulously arranged objects, contraptions, photographs, plants, projectors that beam moving images, sound, and much more, all disposed in and around her signature scaffolding, itself a tour de force of improvisation and precarity.