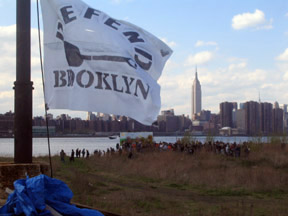 The battle lines have been drawn. From the West Side of Manhattan to downtown Brooklyn, from Harlem to Long Island City, and from Red Hook to here in Williamsburg, large developers—with help from their many, many friends in city government—are getting to build exactly what they want.

Stadiums and high-rise condominium towers, big-box stores and more stadiums—of course this is what your community wants. Never mind these projects’ daunting scale or the minimal number of living-wage jobs they actually create. The large developers and their cronies are essentially saying, “It won’t happen in my backyard, but you should be thrilled that it’s happening in yours.”

What’s new to report is not that residents of various neighborhoods are fighting back or that they’re doing so in the name of protecting their local communities from unwanted types of development. Instead, what’s different about the recent protests—at least over the developer-friendly rezoning of Williamsburg—is that local activists have taken the fight to the streets.

Led by groups including the Creative Industries Coalition and the Williamsburg Warriors, the various rezoning protests have merged long-standing community demands with new styles of theatrical street activism. The reason they have done so is obvious: the Bloomberg administration’s Department of City Planning (DCP) has no use for the community planning process, and neither does the City Council. In tandem with developers, city officials will determine the fate of your neighborhood. In such circumstances, the only remaining option is to take to the streets. And the amazingly inventive recent protests have set important precedents for future local struggles.

Despite the current spin by Mayor Bloomberg and local city councilpersons David Yassky and Diana Reyna, it’s clear that the current rezoning contradicts many of the basic goals of the 197-A plans created over the past decade by the residents of both Williamsburg and Greenpoint. Both of the 197-A plans were approved by the City Planning Commission in late 2001 and passed by the City Council in early 2002.

According to the DCP’s own summary of the Williamsburg Waterfront Plan, local residents’ second “major goal” was “to encourage growth along the waterfront consistent with the scale and character of adjacent neighborhoods.” Thirty- to forty-story towers on the waterfront flatly contradict the neighborhood’s current scale. Both the Williamsburg Waterfront and Greenpoint Plans made public waterfront access their major goal, and here the details of the rezoning get more complicated.

Initially, Bloomberg and the DCP pushed for a privately controlled waterfront esplanade, but after negotiations with the City Council’s Land Use Committee, they agreed to a modest compromise. As Diane Cardwell summarized it in her front-page story in the New York Times, “developers must build the waterfront esplanade, which will eventually be turned over for management to the city’s Parks Department.” While the timetable on this sounds just a bit murky, that’s not even the real problem.

Kimberly Miller, director of planning for the Municipal Art Society, recently critiqued this “private, then public” model of building parks in the Gotham Gazette. At first glance, Miller says, it “sounds like a great deal: Without spending a dime of public money, the city gets waterfront access.” Miller continues:

But this model of development just doesn’t work. Across the Hudson in Jersey City, citizens have been waiting for the completion of their privately funded public waterfront esplanade for more than 25 years... Where separate, distinct sections of the esplanade have been built in Jersey City, public access is often difficult or restricted, and the large buildings form barriers between the neighborhood and the water. The kinds of activities and facilities that make a public waterfront inviting—fishing, kayaking, playgrounds, food vendors, boat launches—are shunned by private developers because of liability risks. Jersey City taught us a lesson in imbalance. Why make the same mistake in Brooklyn?

The short answer to Miller’s question, of course, is that the five developers who own seventy percent of the property being rezoned want to retain control over the esplanade, an invaluable amenity for their new buildings.

At the recent Brooklyn Waterfront Festival, Rolf Carle, a longtime Greenpoint resident and activist, handed me a copy of a spirited, now-defunct local broadsheet called Undertow, dated March 15–21, 1994. This particular issue was headlined “Waterfront Planning Comes Up For Air,” and the main point of the article now seems eerily prescient: “With signs that the real estate market is beginning to heat up after a long dormancy, there is every reason to expect that development pressures and planning decisions will be upon us quite soon. It is time for this community to pull together to determine its fate, before others do.”

The local community did pull together and form its own blueprints for the neighborhood. But the 197-A plans are nonbinding. Meanwhile, over the past decade, local property values steadily grew hotter. And then George Klein and four other developers came in and got everything they wanted, right down to an affordable housing deal that is also nonbinding but full of incentives that would allow them to construct even taller buildings on the waterfront.

The leaders of the recent protests are the first to admit that they were by no means the first local residents to call attention to the rezoning issue. Beka Economopoulos of the Creative Industries Coalition says that her interest was sparked by the outrage expressed by the more than 1,500 local residents who attended a DCP hearing on the plan in Williamsburg last November. “They stormed out of the meeting and in four languages said they didn’t want to lose their neighborhood,” says Economopoulos. “So we brought together a number of local arts activists and tried to help show the strength of the community plan.” Thus originated the “Defend Brooklyn” and “community plan” shovel as a symbol that local residents could build their own neighborhood.

The Williamsburg Warriors also stood at the front lines of the protests, melding fashion with activism. As Eve Sibley—who, along with Siri Wilson, is one of the two original Warriors—explains, the Warriors distribute their signature red headband to “anyone fighting for Williamsburg, or for their own turf.” Sibley further envisions a “city full of different headbands for all the different tribes fighting zoning wars.” As goes the refrain in Walter Hill’s 1979 cult classic The Warriors, from which Eve and Siri took their name, “can you dig it?”

In the wake of Speaker Gifford Miller’s brazen refusal to attend the City Council’s hearing on the Williamsburg rezoning in early April, the Creative Industries Coalition and the Warriors—joined by the Prospect Heights Action Coalition, Reverend Billy, and others—staged a theatrical protest outside Miller’s campaign office. They brought out 40 people at lunchtime on a Tuesday, which ain’t a bad number at all. They captured the attention of the downtown lunch crowd by riffing on “Paradise City” by Guns N’ Roses and “Don’t You Want Me” by the Human League and by putting on an amusing tug-of-war between people wearing cardboard “flowers” versus those wearing “towers.”

The following Sunday afternoon, the same folks assembled the Brooklyn Waterfront Festival, which summoned more than 150 people to protest the rezoning. This was anything but a solemn procession, with the Hungry March Band, baton twirlers, hula hoopers, and Economopoulos—wearing a tutu on roller blades—leading the way. “I’m a sucker for a spectacle,” said the dandified NYU professor Stephen Duncombe, who introduced 6-month-old Sebastien Railla-Duncombe to the wonderful world of protest.

The freewheeling march up went up Bedford, confusing cops while amusing and rousing bystanders, before ending at the waterfront site on N. 8th and Kent Avenue that is already a state park, albeit a woefully underfunded one. There food was served and the Rude Mechanical Orchestra played, while people picked up litter and planted flowers. As my Italian landlady, who’s lived in the neighborhood all her life, likes to say, “why not?”

On the last Thursday in April, the Warriors then organized a benefit concert at Club Exit in Greenpoint, featuring an excellent set by TV on the Radio. In between bands, the Warriors “anointed” public advocate candidate Norman Siegel as an honorary member. Siegel also joined the protest the following Saturday, which was led by the horseback ride of Paula Revera (a.k.a. Valessa Monk), who trotted up Bedford shouting, “The developers are coming!” Revera had seriously considered doing the ride naked, but ended up donning riding gear, which in any case was better attire for a damp April day.

So what does one make of all this action? It’s not everyday life in Battery Park City, that much is clear. But to judge the street activism by its “effectiveness” is to miss the point. “We’re trying to create a culture of engagement,” Economopoulos says, in part “to counteract the stereotype of hipster apathy.” Along with her partner, artist Jason Jones, Economopoulos was quite active in the RNC protests, but now she has turned her sights back toward local issues.  After all, “community,” she says, “is an endangered species.”

The Warriors also vow to remain focused on neighborhood issues. Wilson says that passage of the zoning “does not mean it’s over. We still have to fight for public space.” Sibley, meanwhile, plans to focus on creating a “green-powered Williamsburg.” As Brian Carreira reports in his update about the Brooklyn stadium protests, the Warriors are also helping to lead an effort to unify community groups from across the city.

The bottom line is this: trying to create equitable, balanced growth is extremely difficult. It’s not only developers who love large-scale projects—it’s also politicians, most of the major media in the city, various unions, and many others. But if you want a livable city, community boards and activists trying to create community are the place to start.

Save our city. Right now.

Click here for Jane Jacobs’s views on the rezoning>>