Ed.’s note: The following is a letter written by Jane Jacobs to Mayor Bloomberg and the City Council about the rezoning of the Williamsburg-Greenpoint waterfront. As modified during the May 2nd negotiations between the Bloomberg administration and the council’s Land Use Committee, the plan now calls for some industrial retention and makes nonbinding, incentive-based provisions for affordable housing. Jacobs’s key point about the contradiction between the rezoning and the goals of each community’s 197-A plan remains valid, however. Here is the entire letter. 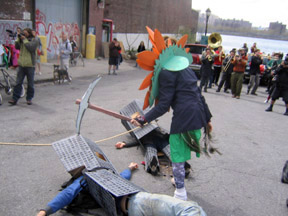 April 15, 2005
Mayor Michael Bloomberg and all members of the City Council


My name is Jane Jacobs. I am a student of cities, interested in learning why some cities persist in prospering while others persistently decline; why some provide social environments that fulfill the dreams and hopes of ambitious and hardworking immigrants, but others cruelly disappoint the hopes of immigrant parents that they have found an improved life for their children. I am not a resident of New York although most of what I know about cities I learned in New York during the almost half-century of my life here after I arrived as an immigrant from an impoverished Pennsylvania coal mining town in 1934.

I am pleased and proud to say that dozens of cities, ranging in size from London to Riga in Latvia, have found the vibrant success and vitality of New York to demonstrate useful and helpful lessons for their cities—and have realized that failures in New York are worth study as needed cautions.

Let’s think first about revitalization successes; they are great and good teachers. They don’t result from gigantic plans and show-off projects, in New York or in other cities either. They build up gradually and authentically from diverse human communities; successful city revitalization builds itself on these community foundations, as the community-devised plan 197a does.

What the intelligently worked out plan devised by the community itself does not do is worth noticing. It does not destroy hundreds of manufacturing jobs, desperately needed by New York citizens and by the city’s stagnating and stunted manufacturing economy. The community’s plan does not cheat the future by neglecting to provide provisions for schools, daycare, recreational outdoor sports, and pleasant facilities for those things. The community’s plan does not promote new housing at the expense of both existing housing and imaginative and economical new shelter that residents can afford. The community’s plan does not violate the existing scale of the community, nor does it insult the visual and economic advantages of neighborhoods that are precisely of the kind that demonstrably attract artists and other live-work craftsmen, initiating spontaneous and self-organizing renewal. Indeed so much renewal so rapidly that the problem converts to how to make an undesirable neighborhood to an attractive one less rapidly.

Of course the community’s plan does not promote any of the vicious and destructive results mentioned. Why would it? Are the citizens of Greenpoint and Williamsburg vandals? Are they so inhumane they want to contrive the possibility of jobs for their neighbors and for the greater community?

Surely not.  But the proposal put before you by city staff is an ambush containing all those destructive consequences, packaged very sneakily with visually tiresome, unimaginative and imitative luxury project towers. How weird, and how sad, that New York, which has demonstrated successes enlightening to so much of the world, seems unable to learn lessons it needs for itself. I will make two predictions with utter confidence. 1. If you follow the community’s plan you will harvest a success. 2. If you follow the proposal before you today, you will maybe enrich a few heedless and ignorant developers, but at the cost of an ugly and intractable mistake. Even the presumed beneficiaries of this misuse of governmental powers, the developers and financiers of luxury towers, may not benefit; misused environments are not good long-term economic bets.

Come on, do the right thing. The community really does know best.

In the kitchen of a townhouse with a tall ceiling, Toby Kamps talks to Imi Knoebel, his wife Carmen, and his longtime manager and former proprietor of the city’s legendary art and music bar Ratinger Hof. Joining them is artist and activist Johannes Stüttgen, who was a classmate of Knoebel and who has remained a friend over the ensuing decades.

The pairing of the works in the online gallery—Muchalski with 23 photographs and Rhodes with six paintings and four works on paper—brings out a common luminosity, like a recollection of lived experience, as the refined tones of Muchalski’s black-and-white photos coax echoes of tonality from Rhodes’s closely spaced bands of black.

by Saadat Hasan Manto, translated from the Urdu by Matt Reeck and Aftab Ahman

Saadat Hasan Manto (1912–1955) is a giant of South Asian fiction. His Urdu stories, vignettes, anecdotal prose, and satire place him squarely at the center of the Urdu canon. His continued cultural relevance can be attested to new dramatic works centered on his life and writing: the 2018 film Manto by the famous Indian actress, activist, and director Nandita Das, and the 2019 staging of Manto’s work by Motley, the Mumbai theater troupe of the famous Indian actor Naseeruddin Shah.