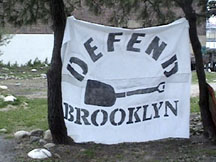 For most of the last year Bruce Ratner, a developer who has made a career out of being the “stealth mogul,” has tried to put a sunny face on yet another of his taxpayer-subsidized, utterly-out-of-scale Brooklyn proposals: the 7.8 million-square-foot Atlantic Yards. Instead of the shadowy fixer who put up the lifeless MetroTech and the poorly conceived Atlantic Center and Atlantic Terminal on the public’s dime, Brooklynites were presented with all-smiles press conferences in front of Junior’s. Mailboxes were inundated with expensive full-color brochures, and uninformative but flashy “informational meetings” were held.

The extent to which these tactics were successful in portraying the Forest City mogul’s softer side is unclear. With rival developer Shaya Boymelgreen agreeing to sell his substantial piece within the area of the proposal, as well as Ratner allies Mayor Bloomberg and Governor Pataki ensuring that the Atlantic Yards proposal will go through little, if any public oversight, it appears that Forest City’s paltry gestures to “involve the community,” as Joyce Baumgarten, Ratner’s longtime public relations representative put it way back in February of last year, have evaporated.

Nowadays, Ratner has no qualms about demanding that the Brooklyn Chamber of Commerce ban concerned residents and the press from a luncheon where he spoke. Additionally, Daniel Goldstein of Develop Don’t Destroy Brooklyn was specifically excluded from a borough president’s meeting in late March discussing the proposal.

And the public fleecing is back too—if anyone questioned whether it ever left. Develop Don’t Destroy’s “Anatomy of a Sweetheart Deal: Public Subsidies and MOU for Dummies for Forest City Ratner’s Atlantic Yards Proposal” estimates that public subsidies for the proposed basketball arena and seventeen skyscrapers will exceed $1.5 billion dollars. This includes the already promised $200 million dollars from city and state for infrastructure, along with a slew of tax exemptions, most notably an estimated $360 million of tax abatement for a 30-year lease and a half billion in bonds—a portion being tax exempt—to cover the entire construction cost of the arena.

Goldstein acknowledges that the numbers are estimates, but notes that Forest City has not produced any numbers of its own for taxpayers to consider. “One part of the Memorandum of Understanding (MOU) [that is perplexing],” he adds, “is that the plan in the MOU is not the final plan.” That is, the document issued in March of this year is identical to the Gehry designs released in January 2004. This despite numerous reports coming from the developer’s office that there had been substantial modifications with regard to the commercial versus residential mix and the location of some of the buildings on the site.

With this model standing still while accounts of alterations swirl around, one wonders how much “celebrated” Gehry and ho-hum Ratnerville will end up in the aesthetic of the final Atlantic Yards proposal. Of course there is a certain irony that the builder who cannot fathom building for the needs of a community would “discover” architecture and team up with a designer notorious for creating a gallery whose scale swallows all but the most gargantuan art (the Guggenheim Bilbao) and a concert hall so shiny its surface had to be sanded down so as to not ruin neighbors’ views and distract passing motorists (The Walt Disney Concert Hall in Los Angeles).

Forest City is also providing a steady trickle of misinformation regarding how much property it still needs to acquire. From the various articles that appeared in April following the Boymelgreen buyout, one got the impression that there was only one holdout in the way of a Ratner Prospect Heights sweep. It is not simply lazy reporting either. In an article that opens with the unfathomable statement “you’d expect Bruce Ratner to be opposed to the building of a stadium for the Jets on the West Side of Manhattan,” John Crudele of The New York Post notes that Ratner “claims there is only one homeowner who is still holding out.”

Daniel Goldstein, the only homeowner to stand against Forest City in his particular building, chuckles at the idea that he is the only resident holding out. “There are two I know of in the [neighboring] Spalding Building,” he says, and he calculates “there are between 20 and 30 properties [Ratner] would need to acquire” in order to own everything aside from MTA land in the proposal’s “footprint.”

With Bruce Ratner attempting to barrel forward, leaving the common folk in his dust, the nature of the opposition is transforming. Councilwoman Letitia James acknowledges the proposal “is unfortunately moving,” due to the developer’s “good relations with political figures in the city and state.”

Develop Don’t Destroy, according to Goldstein, is “preparing numerous legal cases which are very valuable” on a variety of issues, including “eminent domain and environmental issues.” He also contends that the alternative UNITY plan is continuing to be developed with the goal of being “completely transparent with numbers to show it as financially viable.”

The relevance of the UNITY, or any other alternate bid proposal, rests squarely on the MTA having a fair, open, and formally announced bidding process for the Atlantic rail yards like the one they belatedly adopted for their property on the West Side of Manhattan. As to whether this will happen, “my understanding is yes,” states Tom Kelley, spokesman for the MTA.

Given that the mayor’s strong support of the proposed Jets Stadium could have cost the MTA hundreds of millions of dollars had Cablevision not stepped into the fray on their own accord, concerned residents of Prospect Heights feel that City Hall’s support of Forest City’s plan would warrant a third-party assessment of the value of the Brooklyn property so that politics doesn’t allow Ratner’s Atlantic Yards to skate through a quiet bidding process, nabbing the rights for far less than they are worth. Kelley balked at the notion. “[Forest City] is doing an appraisal and we are doing an appraisal, but I don’t see the need for a third-party appraisal,” he says.

With the mayor seemingly intent on dotting all five of the city’s boroughs with luxury high-rises and other large-scale development, concerns about the future of New York have extended well beyond Prospect Heights and the West Side of Manhattan.

For example, residents of North Brooklyn are reacting as developers look to transform their low-rise working waterfront into a forest of glass spire playgrounds for the wealthy. Grassroots efforts for community awareness are being spearheaded by the Williamsburg Warriors, founded by Eve Sibley and Siri Wilson. Similar to their counterparts in Prospect Heights, Sibley notes the group’s concerns are issues of “height and bulk, affordable housing, parks, and open space,” as well as 4,000 manufacturing jobs in the plants on the East River.

The Warriors, Develop Don’t Destroy, the Prospect Heights Action Coalition, as well as groups from Harlem, Red Hook, and elsewhere in the city got together for what Sibley referred to as a “citywide symposium,” intended to bring developers to task and consider means for community groups to have a say in construction that occurs in their respective locales.

Daniel Goldstein sees a community-based coalition like this as an important step in being able to speak to “any politician and anyone running for office” and let them know they will need to seek input from neighbors for future projects. “People need to see that this isn’t just any one single development,” he says. “This is a problem that needs to be faced, and [these community organizations] are facing it together.”

Community and intercommunity organizing are essential as the real estate establishment widens its net around the neighborhoods that residents of Brooklyn hold dear. A mayor who has yet to meet a development he doesn’t like (save for one that might stand in the way of his already tattered Olympic dreams) and a borough president intent on exorcising his own feelings of Brooklyn inferiority by destroying the places Brooklynites love, letting loose uninspired developers like Bruce Ratner to remake them into putrid vertical suburbias, leave residents little choice.

Bruce Ratner is going to be getting a whole lot for very little should his Atlantic Yards gain approval. As Councilwoman James reminds residents, “There is no agreement for providing jobs. There are no benefits that can mitigate this project.”

Daniel Goldstein concurs, “There doesn’t seem to be that many permanent jobs” ultimately created by the proposal, especially if the reports are true that much of the commercial office space in the original plan will be reallocated as condominiums.

As if to illustrate how past Forest City promises have fallen well short of the mark, Darryl Greene, a consultant for Forest City Ratner, is cited in a January 2005 City Limits article entitled “The Return of MetroTech” by Matthew Schuerman. “Over the past decade 379 Brooklynites have gotten construction jobs with Forest City contractors at MetroTech and the company’s two shopping malls,” he said.

That is a whopping 38 local construction jobs per year. At this pace, it would take nearly three decades for a mere 1,000 of the much touted contracting jobs to find their way to local residents. Not very impressive for a project that has cost taxpayers millions to construct.

Dance as a form of perseverance and resistance is not just the stuff of movies. Tatjana Barbakoff, a now much-forgotten historical figure, did just that, at great personal risk. Like Rosie, Barbakoff danced as long as she could in the face of hate during the Holocaust. A dancer from Russia (now Latvia) of Jewish and Chinese descent, Barbakoff moved to Germany and had a successful career performing throughout literary cabarets and theaters in the 1920s and early ’30s.

The Shed is Falling Down

Two things about The Shed are unsurprising: the banality of its programming and its shoddy construction—making money is the most banal pursuit, and so The Shed reflects both Hudson Yards' purpose and values as well as the cost-cutting and trimming that's all part of being a real estate developer.