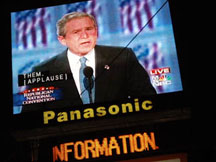 Bush on the Jumbotron in Times Square during the Republican National Convention, September 2004. Photograph by Williams Cole.

I went to Sunday School as a child. As an unhappy and sensitive youth, I should have been easy prey for an alternate reality, but it didn’t take; I spent most of my time in class reading the maps at the end of my bright green New Testament. And now, after years of watching my enemies—the Righteous Right alliance of exploiters, fundamentalists, thugs and liars who run this country—swagger around with self righteous smirks as they pee into the sea of ignorance and fear they’ve created, I’m even losing faith in the “turn the other cheek” idea, and can see the satisfaction that must come from spitting on the graves of your enemies.

The reelection of President Bush in 2004 confirmed nature’s tendency toward balance in all things, with roughly 50% of voters turning toward the light and 50% away from it, ready to pawn their parents’ TV and follow a harebrained messiah into the desert like the Manson Family. If we had all the time in the world, we could do the hard work of detoxing a nation that’s been swilling bitter, resentful right wing propaganda for a few decades. But we don’t, and the only alternative left is to deal with the ringleaders, who play on the worst instincts of their followers in ways that would make a pimp blush and Joseph Goebbels green with envy.

Sure Gandhi, Mandela and King all won their battles through nonviolence, but they never got the satisfaction of tormenting their enemies, and denied them the healing, transcendent power of pain. As Mel Gibson demonstrated in his movie The Passion of the Christ, physical pain and spiritual intensity go together: torture is like a raw nerve connected straight to God, the best way to release the soul from its fleshy confinement.

Which brings to mind: Aztec priests cutting out and holding up the beating heart of a sacrifice before kicking its owner down the temple stairs like garbage into a landfill; the recent news about the serial killer in Wichita who “got off” on meticulous torture for decades while he quietly enforced rules and regulations for the city and climbed the ladder to become president of his church; the whipping Mel has endured since the movie, which has only hardened his already pro-Inquisition beliefs.

Thank God we have celebrities like Mel, unafraid to martyr themselves for the beliefs that sustained them when all the money and fame in the world couldn’t fill their emptiness, when they doubted their worth in spite of the endless flood of desperate letters from lonely fans who found their own salvation in close-ups of Mel from his Lethal Weapon DVDs, played in slow motion, each frame pregnant with the love and purpose that would bind them together, soul to soul, for all eternity.

But what impressed me most about Mel’s movie were the comments of the faithful, who said they felt even closer to Christ after watching his torture. Apparently, just like video games make kids more violent, watching torture makes believers more devout.

I’m not sure I like where this is going, but it’s too late now. Sometimes my thoughts feel like a bag full of snakes, and I have to unleash them on the world before they poison me. I realize this cowardly act makes me the opposite of Jesus—because instead of “taking one for the team” I’m inflicting the pain on everyone else—but Bush has been doing that all along and people treat him like some kind of idiot savant saint.

Religion can be a tricky topic because people just BELIEVE IT and there’s no reasoning with them. Fanatics wreak horrible vengeance to “prove the power” of their faith, then claim they’re just instruments of God so they can have it both ways, with the satisfaction of blood on their hands and heavenly light on their face. (That reminds me of my experience as a young local extra in a traveling production of the Passion Play, where the heavenly spotlight landed on Jesus’ butt, instead of his face, more than once. I remember the actor playing Jesus seemed like a pompous jerk, but how would you like living in between the Son of God and the reality of an aging actor stuck in a third rate troupe, riding a broken down bus from one hick town to the next for months on end?)

Just like communists and other totalitarian idealists, these people view anyone who won’t join their cult as expendable. When I see the tight smiles of the Righteous on TV, I get the feeling they’re “visualizing” everyone else burning like torches in hell, screaming “You were so right! Your beliefs are more powerful than all the nuclear weapons and steroids on earth! If only I’d realized all your claims are true! But I didn’t, and now I’m burning in hell forever, just like you said I would!!”

Given all that, I believe I’ve figured out how to “deal with” the ringleaders and make the world a better place:

I’D HIRE SOME OF THOSE VICIOUS BASTARDS FROM IRAQ TO CHOP THEIR HEADS OFF.

Then I’d sell video of it on pay-per-view, so their followers can be inspired to new heights of devotion. “Snuff” films must still be illegal, even on cable…

Though maybe not for long: I just read that some entrepreneur in Texas has made it possible to shoot animals by remote control over the internet. Who says America has lost its ability to innovate?

I know that a lot of this religious fervor is in response to a world spinning out of control. But instead of trying to understand, adapt and move forward, the Righteous crank up their propaganda machine to coax everyone back to the caves and onto their knees, to chant against the darkness like sheep bleating at the wind.

And is it just a happy coincidence that their corporate sponsors want the same nation of sheep? For the short sighted investor, what could be more attractive than a society where morality is strictly enforced unless there’s a buck to be made? They can’t see the front end of the Wal-Mart “supply chain” in China, where enforced obedience has kept a lid on individual potential for millennia, or as far south as Latin America, where 500 years after the priests and freebooting Conquistadores came ashore, most of the flock is still obediently kneeling in the mud, praying for relief.

…but it doesn’t matter because I plan to keep their heads ALIVE (with some kind of miniature, high tech heart-lung-spleen machine I haven’t had time to build yet) so they can contemplate life without limbs, like the guy I saw playing a portable organ with his face on the Atlantic City boardwalk years ago. I know they don’t mind the idea of living without a brain, like that poor woman in Florida they propped up for the cameras, but let’s see how they like life at the other end of the stick, completely conscious but unable to move.

Note that I would NOT just stack their heads on a platform like some pagan. I’d put them right out on the street so they can continue to argue their case, and we can see if the inability to run away takes the edge off their viciousness. I’d also videotape their experience for a reality show and sell it to some cable network; if Mel can get rich torturing Jesus, why should I keep starving? Here’s the lyrics I wrote for the show’s theme song:

My head fell off,

then my body split.

I yelled “Hey come back,

It did, but then it kicked me

dipped its fingers in its neck

and scrawled in blood on the wall:

’cause your life’s gone south,

and your BIG FAT MOUTH…

Please excuse the profanity above; I figure if you can’t say something without cursing, you’re not really trying. But in the degraded world my enemies have created, there’s no point in reaching up out of the gutter for language that might appeal to a reasonable person. Reasonable people are irrelevant nowadays: they don’t seem to have the will to remake the world in their image, and while they fret over what to do, the Righteous would jump right on “chickenshit,” because it crosses a line they’ve drawn, and nothing offends them or their god like someone who won’t SUBMIT.

I guess masterminding brutal beheadings would make me as bad as my enemies, but so what? In a world where facts and logic have no place, the moral high ground belongs to whoever’s left standing. And I plan to keep on standing.

So when I see the heads of my enemies sitting in an intersection—with lowriders pumping up the hydraulics just enough to clear them as they drive through—frantic with worry about what lies ahead of them, with wild derelicts, kids, dogs, cats, rats, pigeons and flies all pestering them to their festering end, before the searing pain of their tortured flesh rises to an unendurable climax, a white hot howl to the heavens, I can rejoice in the thought of them returning cleansed to their maker and eternity, and laugh the best laugh of my life as I say, “This is the world you wanted, assholes—live in it!”

Higher Education and the Remaking of the Working Class

During its heyday following World War II, a college education was a means to lift parts of the working class into a newly-defined middle class, no longer based on the occupations of the past but instead conceived in terms of education, home ownership, well-paid employment, and household consumption.