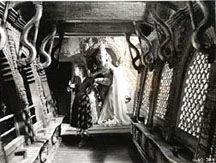 There’s little point in citing all the different genres, plots, or wildly varying locations of Michael Powell’s films. His subject matter—whether B/W depictions of WWII pilots or bomb disposal experts or the sweetest adult love story you’ll ever see, or saturated 3-strip Technicolor depictions of Arabian Nights fairy tales, nuns in the Himalayas, English comic characters come to life, ballerinas casting love and life aside for art, or a serial killer murdering with a movie camera—actually remains constant. It’s the lure of self-delusions, our interior confusions, and the serpentine routes they follow to expression, the thin, easily blurred line between what passes for reality and whatever its alternative might be (madness, heaven, magic, love, the afterlife, etc.), the enduring values and horrors of class identity, and, uh, did I mention self-delusion

Powell’s singular combination of literate, European perversity, and lyrical, flowing narrative puts him in no school but his own. And no director can compare to his use of color to underline issues of character, moral themes, emotion, or psychological subtext. His Technicolor films are, simply put, the most beautiful ever made (Black Narcissus won an Oscar for cinematography), and every frame nourishes the narrative. To see his films in 35 mm on the best screen in town is pure joy.

With plenty of heartbreak.

While you should see as many as you can, the top four would be:

The Red Shoes: Of course, it’s the ultimate ballet movie. But it’s also an adult, cosmopolitan essay on the obsession art requires and the hypocritical battles men will undertake to possess their muse. The fantasy ballet sequence that marks the climax of the film is a hallucinatory, nightmarish, Jungian, Freudian, symbolist riot of pure cinematic expression—all that emotion emerging only from the image. Shots and sets flow into one another with the seamlessness of a dream (or drug trip), with every image polished as a jewel and as impenetrable as the psyche that created it. (5/7, 5/29)

I Know Where I’m Going: A straightforward, charming, credible adult love story, with no hidden messages save the clear happiness of a not uncomplicated spirit working on a pleasant tale. Smart as hell, though, with not an ounce of unearned sentimentality. (5/13, 5/14, 5/30) 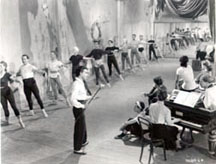 Film still of Red Shoes. Thanks to www.powell-pressburger.org

Peeping Tom: Powell seemingly trying to exorcise all the credibility a life of genius gained him and damn near succeeding. An abused boy grows up to be a murderer of women, using a movie camera to which he has attached a mirror and a knife. While you work out the symbolism, add this to the mix: Powell himself plays the abusive daddy who creates the murderer. In its own terrible way, the film is funny as hell, and shockingly prescient in its prediction of a society dominated by the notion that to observe life is to control it. (5/8, 5/29)

The Love of Joey’s Life

Zack Graham brings us an original story of high-Gogolian strangeness played out on the streets of Chicago. Teenage Joey's turbulent plungings might easily be dismissed as noxious angst, but Graham excels in capturing the awkwardness and vulnerability of adolescence. The perspective—distant as we are distant from ourselves in dreams, while simultaneously immersed in the illusion of sensory experience—invites questions of how much, if at all, we should sympathize with the person before us.