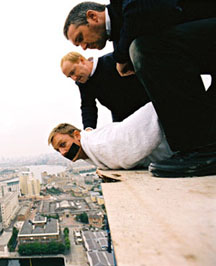 Threatening to throw someone off a yet to-be-completed skyscraper in a British gangster movie is to indulge in British noir neoclassicism at its finest. Like everything else in Britain, Brit noir has traditions to be observed, touchstones to be honored. In this case the threatening-to-throw-off touchstone is 1971’s seminal Get Carter, Mike Hodge’s deadpan, cold-blooded low-fi masterpiece, in which Michael Caine rampages through the midlands in search of revenge. Get Carter follows in the footsteps of its predecessor, the psychedelic noir Performance, in that very little of plot or motivation is ever explained. Clues never preface the action but emerge from it, and Caine himself reveals nothing.

Neither does Daniel Craig, who plays the coke-dealing noir man of Matthew Vaughn’s sleek new Brit noir, Layer Cake. Any details of our hero’s bio remain a mystery for a simple reason: who he might be, or where he might come from, doesn’t matter to the plot. That’s a significant omission in class-ridden England; we knew Caine was a northern yobbo turned city boy. Craig seems a well-educated man slumming; that makes him more dangerous to himself, given the company he’s keeping. It’s in the unshedding of his pretensions to civilization (or his genuine right to it, who knows?) that Craig becomes, by the terms of this universe, heroic. Because he remains a Stranger, Craig is defined only by his actions. Thus Layer Cake delivers the critical existential metaphor that makes noir noir: Fate is our own creation, we make our world, we make ourselves. Layer Cake is a rare combo of brains, understatement, and silky style. Which is remarkable because the director is one of the producers of Lock, Stock and Two Smoking Barrels, a film that ached desperately to be a noir but lacked the key noir ingredient: dread. 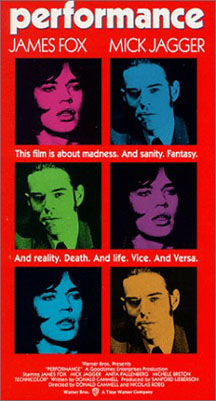 Lock, Stock suffered from the malaise that infects all modern noir: self-consciousness. In particular, self-consciousness about film noir history and its tropes. We can’t unlearn what we know, but we can ignore it or rise above. Layer Cake, while honoring its influences, manages to do both. Lock, Stock, for all its gleeful referencing, was The Monkees of British film noir—ersatz, cartoony, endearing—and thus never quite convincing.

The Lock, Stock characters were not afraid; they were bemused. Way too bemused. None felt the ever-present shadow of Fate’s ten-million-pound-shithammer that looms over every true noir striver. Think of Mitchum in Out of the Past, or Richard Widmark in Night and the City, afraid of his own shadow, scared to stop moving, just waiting for everyone to find out how worthless he is. Every noir man knows his efforts are in vain. Every man in noir knows the universe is arrayed against him and him in particular. That makes the noir man not only enraged but deeply, paralyzingly afraid. Afraid not of his fellow man nor of the consequences of his actions but of the nature of existence itself. When that wholly reasonable fear contains its earned portion of awe (at the myriad, subtle, crushing ways the universe defies him), the noir man experiences Dread with a capital D. Events will compress that dread until only rage can express it, and at that moment the noir man comes alive.

Craig’s character lives in fear from the first time he opens his mouth. We hear his uncertainty in that indispensable and often abused noir device, the voice-over. Craig’s voice-over serves not to run ironic, referential punch lines, as in Lock, Stock, but functions as voice-over should: as Craig’s own Greek chorus, his attempt to somehow structure his battle against the universe by the application of his puny rational thought and rules-to-live-by. Even as he speaks, we know his rules will be shattered. However smart he manages to be, the noir universe will prove smarter. As we wait to see if Craig’s fear is any match for the universe’s cunning, Layer Cake never overplays its hand. One of the most satisfying aspects of this absurdly satisfying picture is how the brains of the film—the subtle details of costume design and how it reveals character, the potent mise-en-scène, the brutal, believable violence—are both subsumed within and expressed by the plot. There is little self-conscious showing off for the sake of style or noir cred.

Which is not to say that Layer Cake ain’t a stylish picture. It’s a new link in the cherished chain of stylish Brit noir touchstones, and owes a bit to all of them: Nicholas Roeg’s Performance (’70), Hodge’s Get Carter (’71), John Mackenzie’s mighty, mighty The Long Good Friday (’80), Stephen Frears’s The Hit (’84), Mike Figgis’s credibly romantic Stormy Monday (’88), Hodge’s bleak Croupier (’98) and Jonathan Glazer’s Sexy Beast (2000).* Layer Cake, like its forebears/influences, is morally ruthless, stylistically coherent, unafraid to be smart and not at all willing to explain a damn thing. The plot is revealed mostly in dialogue—Brit noir, for all its convincing atmosphere of doom, can be as chatty as a lady’s tea—and there are moments of such thick ’n gooey London & Midlands accent authenticity that you may find yourself wondering what tha’ fook thair saayin’. Craig, however, like Michael Caine, like John Hurt in The Hit, like Jagger in Performance, like Clive Owen in Croupier, like Sean Bean in Stormy Monday, says as little as possible. Words are not to be trusted, and the more readily someone speaks, the less he/she can be relied upon. Again, this is noir’s existentialism in action.

Layer Cake’s visual signature springs not from any Brit noir tradition but from, of all things, contemporary French film noir. Luc Besson’s La Femme Nikita (1990) changed everything—it proved the first truly modern noir, and all succeeding noir has had to deal with it. Cédric Klapisch’s Ni pour, ni contre (bien au contraire), which was easily the best film of 2003 that never got U.S. distribution, built on the foundations of Nikita’s revolution. (Ni pour is available only in French video-format DVD—I got mine on AmazonFrancais—and is worth the price of buying an all-format DVD player all by itself, as is another, low budget, disturbing new Brit noir, Dead Man’s Shoes.)

As Layer Cake is to Get Carter, so Ni pour is to Nikita. Both of the latter crack the most basic noir tradition and feature a woman as hero. And in both, the woman is the innocent victim who needs rescue and the lethal, unknowable femme fatale—the seductions of fate incarnate (and ain’t that hard cheese for her…). Nikita and Ni pour also deviate from the classical noir square film format; both are shot in the anamorphic format, the 1:85 ratio known, among other names, as Cinemascope. The wide, low-ceiling rectangle was famously derided as being “only good for snakes and funerals.” Was that David O. Selznick or Fritz Lang?

In any case, within that rectangle, Besson found a new visual paradigm for noir. In place of the deep shadows and blazing whites of classical noir high-contrast B/W, Besson reveled in color. He filled his frames with naturalist colors—character-revealing interiors, oppressive streets that filled the frame from edge to edge but offered no redemptive horizon, and various outposts of alleged civilization where only violence lurked. Though driven by visual style, Besson never looked backwards; he crammed noir into the jittery camera and arrhythmic cutting of MTV. Besson was probably the only person on earth unsurprised at how well it fit.

Ni pour took Besson’s approach a step farther. Where Besson was deliberately naturalist (in keeping with noir’s neorealist roots), Klapisch let color run riot. Every shot, every frame, is ringed with hard greens, deep reds, and glowing blues. He never distracts from the action, but like the director/cinematographer teams of classical noir, he insists that every moment be visually startling, visually nourishing. His characters swim through this rich world, suggesting that their compulsions—criminal hysteria, desperation for their feelings to be unceasingly overwhelming, a terminal terror of peace & quiet—can find a corollary outside themselves if they just surrender to their psychosis. When in a state of criminal grace, the world conforms to their wishes of how it might be: lit like a Christmas tree, perpetually in motion, a new horizon always in sight.

It’s easy to see the effects of these pictures on Layer Cake’s frames. Vaughn and his cinematographer, Ben Davis, chose a middle ground. Their rectangles are not quite as hyperkinetic as Besson’s nor as hysterical as Klapisch’s. Vaughn keeps the camera moving—insisting that there is no firm ground on which our hero might stand, no perspective from which the truth can be perceived—and edits from that movement to static frames, like slamming on the brakes. Vaughn saves the most brutal violence for his most quiet frames. So just when you accept the deceleration and draw a breath, you get clobbered.

Vaughn’s craftsmanship is a real pleasure, especially since the film is so unfull of shit or plot guideposts. It’s up to us, as it’s up to Craig, to sort out the villains from the allies, and to learn whom he can bluff and whom he better serve. Craig’s aggressive blankness can’t have been easy on his co-stars, but his tamped-down range works. His default response to the worst violence and the most alluring sex (incarnated by Sienna Miller, and she got some big-time, old-school noir allure on her) is a baffled caution that’s funny and appropriate. Craig’s rigor keeps things real and matches the rigor of his character’s approach to the world. And the director’s rigor to his material.

As it must happen in the best noir, the character parts are the bricks that build the house. Colm Meaney, most recognizable from Star Trek: The Next Generation and Deep Space Nine, finally gets to speak with his native Irish accent. George Harris, so menacing and bureaucratic as the Commissioner in Prime Suspect 2 (speaking of Brit noir!), here plays relaxed, equally at home with being consigliere and psycho ass-kicker. Michael Gambon, who so enjoyed eating the scenery (and Kevin Costner’s lunch) as a sleazy frontier tycoon in Open Range, takes even greater pleasure understating as an even more sleazy uptown pirate. And Jamie Foreman masterfully channels the Bob Hoskins foaming-at-the-mouth lower-class aggro-man that Hoskins became too big a star playing to ever play again.

But that’s how noir progresses, innit?


*Much appreciation to Karl O’ Toole

Ladders appear across spiritual traditions linking the lower and upper, the earthly and material with the everlasting and transcendent.

Inspired by his discovery of tantric mandalas and believing that Western traditions put too much faith in subjectivity and the creative unconscious, an artist turns to mathematics and systems. For one of his best-known series he begins with photographs he has taken of trees in Central Park.

Joy in Spite of Everything: Steve McQueen’s Small Axe

McQueen’s heartfelt and righteous Small Axe anthology explores the vitality of the UK’s Windrush generation of immigrants from Jamaica, Trinidad and Tobago, and other Carribean nations against the backdrop of a changing Britain from the 1960s to the ’80s.