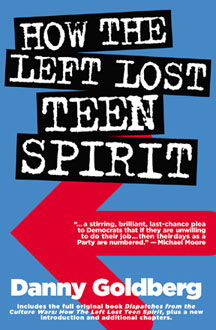 Danny Goldberg, former CEO of Artemis Records, is the new CEO of Air America. He is the author of How the Left Lost Teen Spirit, which will be published in paperback this month by Akashic Books. Rail editor Theodore Hamm recently sat down with Goldberg at Air America’s corporate headquarters in Chelsea.

Theodore Hamm (Rail): The recent HBO film Left of the Dial showed how Air America got off the ground as a national radio network, but it didn’t really say much about the politics that the station wants to represent. It’s anti-Bush, anti-Fox News, and in 2004 it was pro-Kerry. In general, how would you define its actual politics?

Danny Goldberg: Well, I guess as liberal and progressive. Those words imply a set of views on a variety of issues. I think we’re in favor of collective action through the government to take care of people, as distinguished from a free market philosophy in which everybody for themselves and let the winners win and let the losers lose. And this is manifest by issues such as national health insurance, strong Medicare, and Social Security. We’re in favor of environmental regulations in order to preserve balance. I am a business man, I like business. I think that liberalism is enlightened capitalism. But something like the environment is an issue where, without the government, you just can’t expect any restraint on the part of business and you’ve got severe problems. In terms of international policy, I think that a lot of us feel that the current foreign policy is a radical break with decades of another philosophy, that of working with other countries and being very restrained about military force. Not that it should never be used. I personally thought that the Afghanistan invasion made sense in light of the Taliban and their connection to 9/11, but I didn’t think the Iraq war made sense. Not everybody at this station agrees on every issue, but I think in general you’d hear a critique of what I would call empire-building foreign policy, in favor of becoming a more collaborative member of the nations of the world so as not to make the U.S. a target for so much negativity. On social issues there’s probably a feeling that the government should not intrude so much into individual’s private lives. That is an area where the government should stay away. These things change every month, but there are positive progressive ideas about a lot of these issues; they’re rarely aired in the mainstream media and never aired in the right wing media. There is an imbalance in the national media conversation about almost all of these issues, and I think that Air America is helping to begin to balance that out.

Rail: The title of your book is How the Left Lost Teen Spirit. So would you call Air America “left” or even “left-leaning”?

Goldberg: I think that “left,” “liberal,” and “progressive” are all imprecise words. When you are doing a title of a book you are just trying to find something that can roll off the tongue. That just sounded better to me. Some of my friends thought it should be called “How the Democrats Lost Dean Spirit,” or liberals lost it or whatever. But I just kind of liked the one syllable of left. But I don’t think any of those words have scientific or precise definition. They all imply a philosophy that is in favor of collective action to balance out capitalism—not to replace it but to balance it out, so that individual people who aren’t the luckiest ones, making the most money and things like that, can have some chances: at least to get an education, or—if their parents aren’t rich—to get some healthcare, and so on. So left, liberal, progressive, these are really semantic differences, there is no exact meaning in any of them.

Rail: Would you apply any of these terms to the Democratic Party at this point?

Goldberg: The Democratic Party is a collection of a lot of different kinds of people. I certainly would apply those terms to Ted Kennedy, and to my congressman, Jerrold Nadler, to Maxine Waters, to all sorts of people in the so-called Progressive Caucus in the House, as well as to Russ Feingold, Barbara Boxer, and others. I think there is one half of the Democratic Party that truly is progressive, and there is another half that has lost its way on certain issues but sometimes votes in the right way, sometimes doesn’t, sometimes takes leadership on progressive issues, sometimes doesn’t. I think it is as much of a hybrid of different philosophies as the Republican Party is. Big political parties that are going for majorities are always going to be coalitions of several different groups within them.

Rail: Is the network in any way attached to the Democratic Party? Or just in that orbit?

Goldberg: I think that everybody on Air America supported John Kerry. The same way I think that if you were to look at the conservative talk-show hosts like Rush Limbaugh and Sean Hannity and Bill O’Reilly and Michael Savage, they all supported George Bush. I am enjoying coming here during a non-election year, which is a time when you can participate in a conversation and be an influence on the Democratic Party and on the national conversation. During election years, everything is seen through the prism of two choices, especially during a presidential election year. And that’s appropriate because it really does matter who the president is, but not every year is a presidential election year and the rest of the time people talk about issues. Sometimes you have a Republican like Chris Shays of Connecticut, who I think made one of the most articulate points criticizing the Congress on the way it handled the Terri Schiavo case. And there were Democrats who kind of went along with what Tom DeLay wanted, so not every issue breaks down along party lines. But I think that if you are a liberal more often than not Democrats are going to be your preference.

Rail: You have been quoted as saying that during the 2004 election a kind of “coherent force” started developing. Can you elaborate?

Goldberg: For many decades, Democrats and liberals were flaccid in terms of their populist approach. There was this surge of activism in the 1960s and early ’70s that produced the civil rights movement, the feminist movement, the gay and lesbian rights movement, the environmental movement. And then there was sort of a sense of entitlement after Watergate, where people just felt they had made it, that these issues were consensus issues, that the fights were to be fought legislatively in Washington. And, to me, for about twenty-five years at least there was a lack of outreach to young people, a lack of outreach in the popular media, and there was an elitism that emanated from liberalism that was very counterproductive. I don’t think it was an elitism in terms of the goal of the policies, but I think it was an elitism in terms of the way that things were expressed, and culturally that helped Republicans. Because people like George Bush can put on cowboy boots and try to talk in regular argot and can fool people in the middle into thinking that he is more like them than the Democrats were. What happened in 2004 was due in part to reaction to the war, in part changing technology, and in part accumulated frustration with Bush. A community of activist networks sprang forth that had not been there for at least a quarter of a century. That included the work of MoveOn.org, the type of grassroots organizing that marked the Dean campaign, all the people who had never volunteered for a campaign before who went and tried to help Kerry’s campaign in the swing states—and I believe it included the people who have come together to listen to Air America radio.

Rail: Was bringing Jerry Springer aboard part of a reaction to the liberal elitism you mentioned?

Goldberg: Jerry Springer is just doing a great radio show. I was not somebody who regularly watched his television show, but I heard him talking about his opposition to the war in Iraq on some interview show and he was very articulate. I was very impressed with the way he argued about that, and then I heard he was doing this radio show. Some people here at Air America had been tracking it and he started it in January out of Cincinnati. The radio show is a serious political show, and it’s very different from the TV show, which some people hate. He is progressive on every important issue and has an incredible gift for communicating emotionally in Middle American language. He is a national celebrity, a true-blue progressive, and he’s really good on the radio, so he certainly is a great tool for progressives in his ability to articulate our ideas.

Rail: How would you respond to Richard Viguerie and David Franke’s argument (in America’s Right Turn) that Air America works when Al Franken assumes a tough stance, but it fails when Al Franken sounds like John Kerry.

Goldberg: I am sure that Viguerie and Franke really want progressives to be successful. That their advice is coming from a place of really, really caring about us. I love when conservative pundits try to tell Democrats how to win, or liberals how to be successful. I guess it is just my cynicism from years in the music business that makes me feel that maybe they don’t really want us to be successful. Maybe they are trying to psych out and intimidate people in the media who think all those things. The fact is Randi Rhodes is as strong a person as you will ever meet in your life. She’s as aggressive an advocate for progressive positions as any conservative could be on the right wing. So are Janeane Garofolo, Al Franken, and the rest of our hosts. And there are people who are not on Air America that are very powerful proponents, like Michael Moore and Paul Krugman. I am not at all worried about the ability of progressives to argue with moral passion and clarity and strength. It is just about getting them a microphone, and that is one of the great things about Air America, it gives these people a microphone.

It’s the summer of 2016. A gallery on West 20th Street offers its space for a month to a political action committee started by two artists. The show features art works that will be diffused as billboards and advertisements to engage voters in the November election.