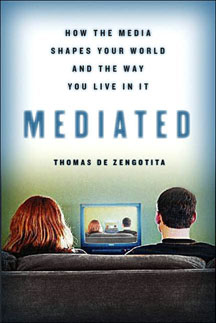 Thomas De Zengotita, a contributing editor for Harper’s, has been praised by the likes of Norman Mailer as a thinker comparable to Marshall McLuhan. His book Mediated: How the Media Shapes Your World and the Way We Live in It (Bloomsbury USA, 2005) presents a new diagnosis for what he sees as a radically mediated world where options have become a defining factor. On the day after now-Pope Cardinal Ratzinger derided what he called a “dictatorship of relativism,” the Rail’s Williams Cole sat down with De Zengotita on the Brooklyn Promenade.

Williams Cole (Rail): So what about the “dictatorship of relativism” that the new Pope doesn’t seem to dig?

Thomas De Zengotita: Conservatives of all stripes see relativism as this kind of hippie, lefty doctrinal product of 1960s radicals who were out to destroy the Canon. That’s not wrong—it’s just a really shallow perspective. Relativism really is a symptom of a gigantic and much deeper process by which people since the ’60s had to learn how to construct themselves, how to become what they wanted to be, as a sort of self-conscious choice. This idea of optionality in a mediated world is a central concept in the book. Take Bush. He’s the perfect example of what I’m talking about because his mediated Me World choice in the ’60s was not to do all that hippie, radical stuff. He decided all that was pseudo. But the idea that this somehow wasn’t a mediated self-constructed choice is ridiculous. You had to decide to wear those little bow-ties, you had to decide to keep your hair short or you had to decide to go to Texas, learn a new accent, learn to walk like that, in effect train yourself to be an Okie from Muskogee. So all those resisting the ’60s were just as mediated, only making different value choices. They chose traditional values. But that doesn’t make them any less relativistic.

Rail: Can you expand that central idea of choice and qualify it as to where we are in the world. I mean, a lot of people would immediately say “Well, most of the world doesn’t have any choice.”

De Zengotita: Yes, this is very important. There’s a caveat at the beginning of the book that’s clearly aimed at people like me and people like you and people who, frankly, are likely to be the readers of a book like this. I want to spell out that I’m totally aware that there are millions and millions of people living in realities that are so desperate and restrictive that nothing I’m saying in this book could possibly apply to them. But there is a sliding scale between the Sudan and hip New Yorkers that is measured in the amount of optionality that people enjoy and/or drown in. The case I make is that the opposite of reality is no longer phony or artificial as it was for the Romantics in the nineteenth century or for hippies in the ’60s or for Existentialists in between. What’s happened slowly is that the opposite of real has become optional. That’s captured in the little idiom you hear constantly today, “The reality is&#x2026;” It’s what people say when they mean you don’t have an option.

Rail: So how does your diagnosis differ from other left media analysis?

Rail: What about optionality and politics? I know you address the fragmentation that has come along with multiculturalism.

De Zengotita: Identity politics. In a sense, it creates too many opportunities. Most kids growing up are barraged with politically motivated messages from the time they’re three, hundreds of messages coming from dozens of different places and—under the postmodern regime of the end of ideology—disconnected. I mean, what does gay rights have to do with the environment? Try to make an umbrella or a rainbow between gays and the black community, I mean forget about it. Cornell West might be okay about that, but that doesn’t make it a real connection. These are all political niches barraging people to get their attention with painful and ugly imagery that is designed to get you motivated but doesn’t really do anything but make you numb. So tragically, that’s how identity politics evolved and that’s how we lost that generation, politically speaking.

Rail: I found that point to be chilling, actually. What you’re saying, I think, is that progressive politics devolved in such a way so that each splinter group has its own agenda and its own presentation. But it’s impossible to compete with the presentations of ads and popular culture that are so much more powerful and appeal to the flattered self so much more effectively.

De Zengotita: Exactly. Again, the commodification analysis doesn’t get to this level. This is another characteristic manifestation of optionality. Of course, some people deeply immersed in left politics are not going to want to see that they are subject to exactly the same dynamic as every other department of our life. Why should it be different? It’s not. So what you’re invited to do when you grow up in this mediated environment—and you saw this starting to happen in the late ’60s and early ’70s—is to become political because you identify with some group and some cause. So it’s flattering! It’s a Me World again. These groups led to the thinning and the incoherence of the mainstream left rhetoric and it was inevitable. On the other hand, while we were using the phrase “identity politics” to label the left, the master identity politician of our age was Ronald Reagan, who was doling out exactly the same thing: the flattered self, feel good about yourself, feel good about America. Vietnam was not your fault, get over it, we’re fine, we’re wonderful, you’re OK, I’m OK. Okies from Muskogee, we’re all OK.

Rail: But backed up by platitudinous rhetoric of God and Country.

De Zengotita: Yes, and that’s hugely powerful and much more inclusive than the niche messages that the left has sent. It is a great advantage that the right has in this whole business. What really started with Michael Deaver in the Reagan administration and what Rove and Bush understand and what no Democrat or lefty has yet to grasp is that reality has nothing to do with this anymore, as far as the activity of politicking is concerned. Of course, the right has very real agendas—break down the New Deal, give the U.S. a base of operations in the Middle East, they are smart guys in their own right. But they understand that what you create in the way of the political Me World for the majority of Americans has nothing to do with reality. It’s a little mediated Me World for these people to inhabit. That’s what’s the matter with Kansas. People vote against their interests because they’re voting for themselves, a representation. But the Democrats are constantly making the mistake of creating an image, like Kerry’s war hero thing, but also talking about reality and issues too. Please.

Rail: So where does that leave the left now?

De Zengotita: The left has no diagnosis of the situation we’re actually in that is comparable to the one this book is actually offering as a foundation for whatever strategic or tactical moves we’re going to make next. The left often thinks that when it says “corporate manipulation and commodification” and “Bush is tricking people into sensational ads about America,” that this is all the diagnosis we need. And we’re completely wrong. We need to understand the Blob—which is my term for the metaphorical embodiment of postmodernism that you can’t escape no matter what you do. You can go out into nature, you can get transgressive in your sex life, stick things in your skin, whatever. No matter where you go, the Blob’s one step ahead of you and you will find yourself performing some kind of mediated act. It’s inescapable. So the left needs to understand that it’s always going to be performance no matter how much you bang your fist on the table and talk about reality. Politics has just become a performance.

Rail: Do you think the left has to look for solutions though? I know in the book you talk about how solutions are part of the same mediated culture.

De Zengotita: Serious critical diagnosis of the kind that I think is really needed and that this book is trying to initiate isn’t going to happen if people are listening to critique with a whole attitude being “I see what you mean, but what’s the solution?” You’ve got to get into the situation. I’m talking about years and years of real diagnostic work. For the post-industrial, postmodern environment someone’s got to come along and invest the kind of intellectual energy and originality that Marx and Adam Smith invested in the early industrial circumstances. There have been a few people who have done so, of course. McLuhan is a major one I can think of. But on the left all too often it’s “Late capitalism plus Adorno equals ‘commodified world sucks’” and then, “What do we do?” That’s not enough.

De Zengotita: Yes, it’s derivative. We’ve got to start from scratch. While I, of course, make a lot of gestures in the book, to really get a hold of this situation, it’s really not enough to read Jameson and Foucault even though I owe them hugely. I’m just saying that the derivative neo-Marxist David Harvey’s efforts to keep the Marxist paradigm going as a critical technique is just not enough. We live in a whole new situation and it needs its own analysis and diagnosis and that takes time. And people who think that there’s a solution at hand at the end of the op-ed piece or that last chapter of my new book need to be brought up short. A little bit of despair is okay for the moment. In case you haven’t noticed, things aren’t going so well. If we were so right, how come everything is so screwed up? It has to be the case that we just don’t get it or we would have fixed this already, and it wouldn’t have happened this way. Clearly we don’t know what’s going on and that’s why there’s no solution in this book.