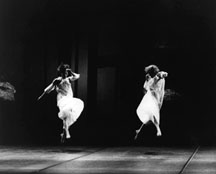 The Trisha Brown Dance Company, formed in 1970, celebrated its 35th anniversary season in April with two programs at Lincoln Center’s Rose Theater. Program A, a tribute to Brown’s collaborations—and friendship—with visual artist Robert Rauschenberg, featured their first work together, Glacial Decoy (1979), along with Set Reset (1983), Astral Convertible (1989), and If You Couldn’t See Me (1994), a solo performed by Brown. Program B included Geometry of Quiet (2002) and two New York premieres: Present Tense and how long does the subject linger on the edge of the volume, which used motion-capture technology to create graphic images projected onto a scrim, covering the proscenium stage.

Brown’s choreography is defined by its fluidity and its calm, seeming ease and humble grace. Her works provide a perfect complement to the visual arts; while most visual art is stationary, when paired with dance, photographs, drawings, and paintings take on a kind of movement as well. In complement, Brown’s works, which are gestural and sinuous, seem to paint the air with images. In addition to Rauschenberg, Brown has collaborated with other visual artists like Donald Judd and, more recently, Terry Winters, who created the backdrops for El Trilogy (2000), an homage to jazz with music by trumpeter Dave Douglas. Brown’s attention to structure has allowed her to cross disciplines, working in opera and creating drawings that resonate with her choreography.

Rail Dance Editor Vanessa Manko spoke to Brown via phone about her 35th anniversary season, her collaborations with visual artists, namely Rauschenberg, and her first foray into motion-capture technology.

Vanessa Manko (Rail): Not all choreographers choose to collaborate with visual artists. When you first began choreographing in the 1960s and ’70s, you worked with functional props and objects for how they could determine and influence movement. When did you begin to work with visual artists, and what drew you to that art form?

Trisha Brown: I was doing one kind of choreography, and when I was in Europe I was invited onto the proscenium stage, which called for a different kind of choreography. The next time I was invited to a proscenium stage—the piece was Glacial Decoy—I realized right away that, visually, I was working with two rectangles: one on the vertical—the proscenium stage—and the other on the floor. And there were no walls, which I had been using as props. So I just began my kind of presentation by foregrounding the issue. In Glacial Decoy, for instance, I moved in and out of the wings with the choreography that was made to go in any direction it wanted to, and then I had to flatten it out. 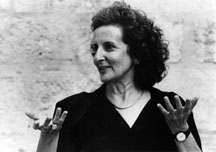 Rail: Your 35th anniversary season celebrated your many collaborations with visual artist Robert Rauschenberg. Seeing Set Reset, Glacial Decoy, Astral Convertible and If You Couldn’t See Me, I felt the works came out of the same sensibility, even though you work in different artistic mediums—dance and visual art. Can you talk about your collaborative process with Rauschenberg?

Brown: We became friends when I was working at the Cunningham Studio. He’s a hilarious guy, Bob Rauschenberg, and he had a great romance with dance—the fact that dance was evanescent, while his sculptures sat there. When I was asked to put my work on the proscenium stage, I was asked what kind of lights I would want and what the dancers would be wearing. I knew nothing about this. These things just hadn’t come up. I had to turn to someone who could guide me with these different elements. And I turned to Bob. I will say this—one factor in all of my collaborations is that I work with friends of mine. You need to know if they’re going to go ballistic at the drop of a hat or not. You have to know if they’ll be able to deal with it. For Glacial Decoy Bob came to the studio to see what I was doing. I usually describe my plan and what I am trying to do. And he said, “I don’t want to be still back there,” and so he created the series of photographs passing behind the dancers. When he comes to rehearsal, I show Bob four minutes of some choreography, and then he knows what’s coming at him. He knows that my structure can carry him and there’s…[pause] Sorry, it’s been such a big work [referring to the 35th anniversary season], some parts of my language just haven’t come back yet [laughs].

Rail: I know that you, too, are also a visual artist and have created drawings while dancing. When and how did this develop?

Brown: I do the same thing in drawing as I do in dance, and I’m not sure which one came first. I think about structure in dance and what is the structure in a piece that’s going to carry us from beginning to end. I also build new vocabulary in every piece. There is a kind of a winnowing-out process as well. So that’s what I do with a piece of paper in front of me as well. Here’s something that might help explain it a little bit: I work with the alphabet. It gets me to take a very common shape and push it a little bit, and then I go right from A to Z, and then I come and rework the figures. I learn how to draw it very well. I often close my eyes and my arms and fingers are moving along the page. I would say my first big motivation in both [dance and drawing] is how I don’t obey the page or the proscenium stage—I don’t obey the edge.

Rail: That’s not only apparent in Glacial Decoy but also in If You Couldn’t See Me, where your face is turned upstage, facing away from the audience, the entire length of the piece.

Brown: It was Bob’s suggestion. He had a Yamaha keyboard and he was making music with it, and it helped him to think about the work if he could picture me in front of him. When he did that, my back was to him, and so he pictured me in that piece with my back to the audience. Actually, the whole idea of dancing with one’s back to the audience is really an anathema to dancing. For instance, you can’t make a full turn. And that was a source of momentum for me in the dancing and the dynamic. My gestural expressions are splayed to the side and I had my head cranked to the back, and that’s very hard to do—to maintain balance. There’s a stress on the vertical.

Rail: In your opinion, what has been your most successful work and why?

Brown: I work in cycles, and that has caused me to keep moving. In the second or third piece of a cycle, I would think, “I really got it right.” But I have special pieces in all my cycles—seeing Astral Convertible again was just a blast. [Editor’s note: Astral Convertible was the last piece in Brown’s Valiant cycle]. I didn’t drive one long pathway.…That’s how I think I could step into opera and direct it because my choreography has a strong sense of structure, but I’d been doing that with every cycle.

Rail: You say you work in cycles and with structures, but after 35 years, your style of dance—pedestrian, fluid, gestural, based on patterns and formulas—has a distinct flavor, almost a kind of technique. Do you feel that you and your dancers have, over the years, developed what could be called the Brown technique?

Brown: I don’t really honor things by codification. I don’t ask myself a question and work it out in two or three pieces. I don’t know how to say this. What I do is what I’ve always done—I build phrases first and then establish a counterpoint, and those things give off sparks. That gives me ideas to do other combinations and leads to making another phrase because I need it now. So I don’t think so. I do think I’m learning that it can be anything—it can be dramatic, it can be humorous. There’s a lot of humor in my work, and no one ever mentions it.

Rail: Can you give an example?

Brown: At one point in Present Tense, when the dancers are in a line, standing there in twos, one sits on the knee of the other. The music starts and the woman pulls out, and the man falls down. No one laughed. People must think it’s a mistake.

Rail: In your most recent work, how long does the subject linger on the edge of the volume…, you ventured into motion-capture technology, which creates a very different form of visual art. What is it like to collaborate with a computer, and how is it different than working with more traditional, static-art work?

Brown: Well, I think it depends on the computer operator and the kind of movement they can capture [laughs]. But I was really up for it. I love problems. They are for me the mother of invention, and I love the tight perimeter—it gives me a purpose to make the work and put myself inside it. We had very little time to work together. I had some forms that I had already choreographed in New York, and that gave us one kind of structure, and then I had my computer wizards—Shelley Eshkar, Paul Kaiser, and Mark Downie. I saw that the stage became liquid, and so I made forms that I believed were liquid also and that could turn on a dime and deliver something else. But I didn’t get the time for the real kind of experimental play that I like to do with everything I make. Talk about evanescence! With the graphics moving on the front scrim! So I’d like a second chance. I’d like to do it again.

Cast near the entrance of Matthew Marks, unshielded from natural light, one of three digital projections by Trisha Donnelly repeats on a short loop. A tall, narrow rectangle frames an image—and contains its movement—visually rhyming with the upright and perpendicular marble monoliths Donnelly has installed throughout the gallery space.

On June 29, the Broadway League announced that it will hire an outside company to “survey diversity in all aspects of the industry,” the latest in a multifaceted and ongoing response by the theater industry to the calls for BIPOC allyship, sparked by the May 25 murder of George Floyd.